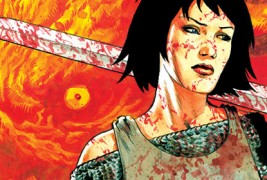 The latest volume of Image Comics’ horror-noir hybrid—Fatale Book Three: West of Hell by Ed Brubaker and Sean Phillips—doesn’t quite achieve the success of the previous two collected Fatale volumes focusing on the mysterious Josephine’s emotional turmoil, and not the men around her.  Where the previous volumes each comprise a larger narrative, Book Three is comprised entirely of vignettes following the immortal Josephine through time.

West of Hell’s greatest success is not feeling gimmicky.  While the first vignette returns readers to the 1930’s and further illuminates other previously established characters, the rest transplant Josephine to medieval times, a western setting and Nazi-occupied Europe.

Brubaker’s writing uses these settings to illustrate how Josephine comes to understand what it means to be immortal, and discovering she cannot interact with regular people.  She is a woman hunted through time, by forces neither she nor the reader understands yet.  This volume serves to help readers emphasize with Josephine, who until now has just brought tragedy to those around her.  In West of Hell we see her pain, struggles and longing as she finally takes center stage in her own story.

Fatale Book Three: West of Hell is definitely the weakest volume released so far due to the choppy nature of the vignettes.  They aren’t even in chronological order.  While each section is well written, the sections are more standalone pieces, and it’s just not as compelling to read five standalones in a row.  I would still recommend this volume to fans, but those who haven’t read any other volumes or issues of Fatale will probably not enjoy this as much as I did. 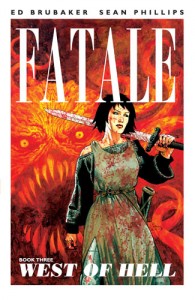