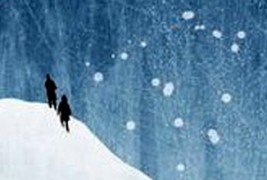 “I work up a detailed synopsis. I print off a text version of the entire book which is broken down into paragraph chunks and go through it with a red pen. I make a point of highlighting themes and character relationships and how someone might emotionally respond, pin pointing opportunities for dramatic conflict, things I can make a scene with dialogue, because quite often that’s what’s absent in Lovecraft books, dialogue.”

Coupled with this meticulous approach to creating graphic novel adaptations, I.N.J. Culbard, a British illustrator who describes himself on his personal blog Strange Planet Stories as “a freelance artist who writes and draws comics…,” always keeps two rules in mind during the creative process: 1) keep to the spirit of the story in question, and; 2) stay true to the story’s medium. In the case of Culbard’s three Lovecraft adaptations, these rules have served him well, and without question Culbard’s graphic novels maintain the same spirit and existential dread as Lovecraft’s cosmic masterpieces.

That said, whilst Lovecraft’s prose verges on the purple (which makes him a “godawful writer” in the opinion of Peter Damien, a contributor to Book Riot), Culbard’s prose is predominately ordinary. This is not to say that Culbard’s graphic novels lack sophistication; rather, Culbard’s characters just sound far more realistic than Lovecraft’s, and when coupled with Culbard’s drawings (which can be compared to a mix between the spiky pen of Guy Davis and the ligne claire style first perfected by Hergé), the overall affect produces a sort of cognitive dissonance wherein New England professors and antiquarians speak like Victorian gentlemen but look like the friends of Tintin.

Dialogue in particular seems to be an important part of Culbard’s reproductions. Besides his lifelong interest in Lovecraft (which, according to Culbard, began in the early 1980s because of the roleplaying game The Call of Cthulhu), Culbard claimed in an interview with The National Review’s John J. Miller that he was also drawn to adapting Lovecraft’s work because of the author’s extremely limited use of dialogue. In essence, Lovecraft’s short stories and novellas are perfect templates for artists because they are heavy on mood and scenery but light on exact language. In some ways this is the complete opposite of Culbard’s other collaborator—Sir Arthur Conan Doyle.

Since 2009, Culbard and comic book writer Ian Edington have adapted all four of the novels featuring Sherlock Holmes and Doctor Watson, from A Study in Scarlet to The Valley of Fear. These books are dazzling delights that adequately capture the late Victorian world of the “Great Detective,” but compared to Culbard’s solo takes on Lovecraft, they are hampered by the writerly gifts of Doyle. Simply put, it’s hard to beat the original novels.

With Lovecraft, Culbard proves that the weird tale works just as well visually as it does on the page. In fact, Culbard’s graphic novels might even improve on the originals, but don’t tell that to Lovecraft purists. Visually stunning, fast-paced, yet undeniably Gothic, Culbard’s three Lovecraft adaptations are masterly examples of how visual storytelling can enhance and even transcend conventional writing.

Culbard’s first adaptation is 2010’s At the Mountains of Madness. Based on Lovecraft’s long novella written in 1931, At the Mountains of Madness is a bleak description of a Miskatonic University-funded research trip to Antarctica. Told in the first-person by the geologist Professor William Dyer, At the Mountains of Madness is one of the most conclusive summaries of the mythology and cosmos that Lovecraft constructed. It is interesting that Culbard decided to start his trio of adaptations not only with one of Lovecraft’s final pieces, but also with one of the author’s most thorough. While the original novella is at times plodding due to its in-depth history of the “Elder Things” of the cold waste of Kadath, Culbard’s graphic novel is a quick, yet endlessly menacing tale about the great white loneliness of perpetual winter. 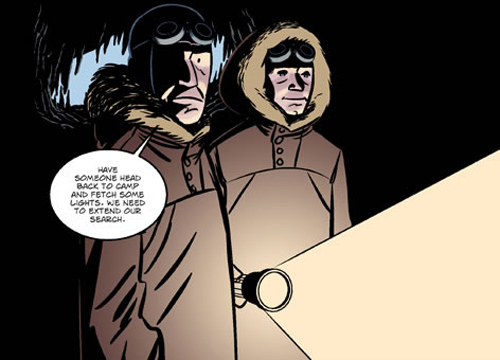 Of course the downfall with At the Mountains of Madness is the graphic novel’s frequent renderings of Shoggoths, the Mi-go, and even Cthulhu. Lovecraft’s monstrous gods are more frightening when left unseen, and yet the decision to draw or show these creatures is often too tempting for those creators fascinated by Lovecraft’s loving descriptions. At the Mountains of Madness suffers a little from this decision, but it ultimately redeems itself because of two truly terrifying scenes: the scene where Professor Dyer’s team discovers what happened to Professor Lake’s party and the scene where Professor Dyer and the graduate student Danforth hear the constant piping of “Tekeli-Li” (the refrain of the Shoggoths) just as the tunnels underneath Kadath begin to blacken.

As the title suggests, At the Mountains of Madness is an exploration through the insanity that can be caused when humans are confronted with ugly truths. Not just any ugly truths, mind you; Lovecraft only dealt with grand reveals that unveiled how thoroughly insignificant humanity really is. In fact, At the Mountains of Madness asserts that the “Elder Things” created humans as a supreme joke. This fact, along with the reality of Kadath and the things that hide beneath its cyclopean towers, are why Danforth and Professor Dyer decide to not only keep mum about their experience, but to also act as living warnings to anyone thinking about exploring Antarctica.

Still, Culbard’s adaptation is tremendous and each panel contains his exquisite art. As with all three of his graphic novels, Culbard gives the people in The Case of Charles Dexter Ward a three-dimensional humanity that is often lacking in the original novel. Likewise, Culbard successfully turned the taciturn and naive Ward of Lovecraft’s story into a more sympathetic victim of humanity’s foolish quest for forbidden knowledge.

Similar to the ill-fated Charles Dexter Ward, Professor Nathaniel Peaslee, yet another one of Lovecraft’s afflicted intellectuals, also suffers from a brain infected with too much knowledge of the unknown. But unlike Ward (who brought the suffering on himself when he conjured Joseph Curwen back into this world), Peaslee’s years-long coma was not caused by his own hand. Peaslee, the protagonist and narrator of The Shadow Out of Time, has had his mind switched with that of a Yithian—a member of a brilliant race of extraterrestrials who have the ability to travel through the boundaries of space and time. 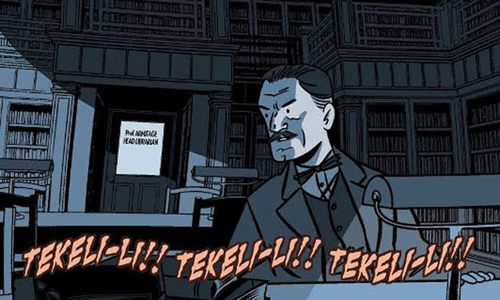 As one of the very last stories that Lovecraft ever wrote, The Shadow Out of Time is a darkly touching narrative about mortality. When it was published in June 1936, Lovecraft only had nine months left on Earth. As such, Peaslee’s attempt to search the desert wastes of Australia for the remnants of Yithian civilization feels quite similar to Lovecraft’s own search for meaning in his creative legacy. In particular, Peaslee’s letters, which are addressed to his loyal son Wingate, are familiar testaments to posterity not unlike Lovecraft’s own stories and letters, which, after all, were mostly done for the benefit of friends and admirers. When he died, Lovecraft was a relatively unknown pulp author who was totally convinced that all of his work had been done in vain. Similarly, at the end of The Shadow Out of Time, Peaslee—a once proud professor of political economy—chooses to deny his entire search as a dream rather than openly deal with its ramifications.

Culbard successfully captures this melancholy in his 2013 rendition of The Shadow Out of Time not only through Peaslee’s stone-faced panache but also through an extensive use of black. Overall, Culbard’s The Shadow Out of Time produces a great feeling of sadness, for the reader is sure to identify and root for the troubled Peaslee. While At the Mountains of Madness is Culbard’s most terrifying adaptation and The Case of Charles Dexter Ward is his most creepy, The Shadow Out of Time is the most tragic, and it lacks an even rudimentary sense of catharsis.

Avoiding the argument over whether or not adaptations can be considered art in the same league with the originals, it’s undeniable that I.N.J. Culbard’s three graphic adaptations of Lovecraft are stark, yet stunning additions to the world of Lovecraftian homages. More than that, Culbard, who is a real artist of the highest caliber, gets it right and his graphic novels certainly prove that the highly dense Lovecraft is transferable to other mediums. Frankly, Culbard could be a good introduction to Lovecraft for many readers, and that can only be a great thing. As an old admirer of the gentleman from Providence, I am usually leery of new takes on Lovecraft. Culbard’s work has made me once again interested in the original stories, and that, more than anything else, makes these three graphic novels worth their cover price.