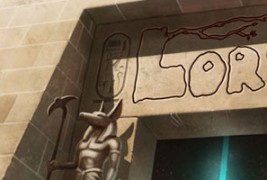 Admittedly, my review for LORE Magazine is long overdue. In March 2012, I was given an e-copy for review (the October 2011 edition). When you take a look at the dark cover of this issue, filled with skulls, along with gates that guard a castle and a wicked gargoyle looming there, one can easily see that this magazine is bound to captivate your dark side in one sense or another.

Aside from the clever and eye-catching artwork that LORE oftentimes displays on their covers, the inside, or rather “innards” are just as professionally developed. LORE begins much like a book, with the typical copyright and dedication page before you land into a short introduction (charnel knowledge) of how LORE was formed, along with various other curiosities. After that, the interior contents are not chapters, but the aforementioned “innards” (pretty clever, guys). In the introductory pages, you find that LORE had begun in 1995 in New Jersey. They had published 9 volumes and then stopped in 2000, only to rise from the dead in 2011.

Despite its nearly 200 pages, I was able to read most of it in one day. As with any compilation of short stories with different authors, some of the tales you might favor over the others, as they will successfully grip you with their mastery of imagery. One recurring thought I had while reading was that the selected stories contained within did offer vivid imagery filled with witches, ghosts, secret things and more.

The edition started out with and ended with a relative pulling towards an H.P. Lovecraft feel. The very first tale takes you underground to decipher ancient legends and the secrets of tombs. The next stories are of differing concepts that led me to my favorite of this issue, which is called The Mandala. In this story, a psychologist happens to cross paths with a former patient from a decade prior. The curious psychologist can’t help but question her about the past. As a young girl, his patient had attempted to step between dimensions only to be caught and stuck halfway inside of her bedroom wall. While I found the imagery of this to be pleasing, the real shock and brilliance of it comes at the end of the story, which I will not spoil for you. The entire issue is filled with relatively original concepts, which seem to have been written by mostly mature writers. Among the unforgettable images, in the very end, the description of a large, dancing beetle wiggling on its many legs still leaves me humored. But again, I won’t spoil the plots for you.

I caught up with editor Rod Heather for an interview. Some of the answers to these questions can be found within the volume of Lore, but I thought that Ravenous Monster readers might want a more in-depth view. I know I certainly do. Read on, Horror Fans….

RavMon:  Typically, I like to start with a brief bio, some background information. Please tell us a little about yourself.

Rod Heather:  Well, I have been fascinated with horror, science fiction and fantasy for as long as I can remember. As a child, I would regularly watch television series like Chiller Theater, or Kolchak and The Night Stalker, or Planet of the Apes. My father was and is an avid reader of imaginative fiction, and I inherited his love for such things.

I used to draw picture stories when I was very young — maybe six or seven, and ended up with quite a collection of them by the time I was a teenager. Usually, they were sweeping space operas or zombie apocalypse stories, and they most often would star my friends, and family members … with me as leading man, of course. In hindsight, they were pretty cheesy, but loads of fun, too. I remember if I were arguing with my brother, he would invariably end up meeting a terrible death at the hands of a horde of shambling zombies or by a tentacled alien carnivore in whatever story I was working on at the moment.

I had a fun childhood full of Dungeons and Dragons, imaginative play, and pillow forts. It all served to cement my lifelong love for products of the imagination.

RavMon:  Now that we know a little about you, tell us about LORE magazine.

RH:  LORE is a semi-annual digest-sized collection of interstitial fiction. Speculative fiction. I publish it with my partner, Sean O’Leary. We hope it will make a worthwhile contribution to the medium.

RavMon:  How did LORE Magazine form in 1995? Who were the key players?

RH:  We were just three guys who loved horror fiction. Back then it was me, Sean O’Leary and Joe Martucci. We each brought something essential to the table, and things just came together; the stars were right, I guess. Frankly, we were so naïve at the time, we didn’t even know a market existed. We thought we were a novelty. So everything was new and fresh, and it seemed like we learned something new every day.

By the end of our run, the staff included Jeffrey Thomas, Brian McNaughton and John Picinich. John is our copyeditor for this volume of LORE, too. Jeffrey has helped us break a tie or two over the past couple years.

RavMon:  Here is a difficult question: Do you have a favorite author or favorite story that was published by LORE?

RH:  That is not difficult at all. For me, it is Brian McNaughton, owing to his brilliant fiction, and scintillating personality (he would always insist!). He passed away several years ago, but he became a very good friend during the time we all caroused together. He was quite the rascal. Endearingly so. In our first original issue this time around, we published a never-before-seen Brian McNaughton work of 10,000 words set in his World Fantasy Award-winning milieu, Seelura. We published more work by Brian than any other writer. His work just spoke to us from the time of our very first exposure to it (continued after the pic). 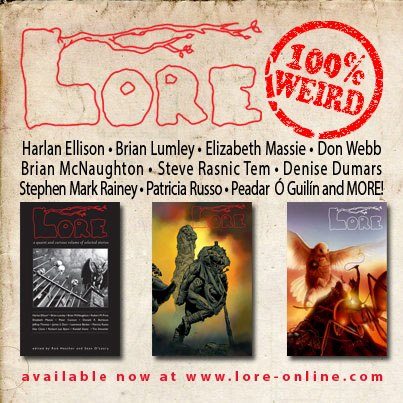 RavMon:  In November 2012, you released the new edition. How has the reception been for it in an age when people oftentimes say they are too busy to read?

RH:  It has only been out for a couple weeks, by this point, but all indications so far seem to point to a generally positive reception. As a writer, you know how it is: everyone is a critic. You have to grow a tough skin in ventures like this. You can’t please everyone all the time. Ultimately, I think we aspire to publish a magazine that we would enjoy, as readers.

RavMon:  What do you expect in the future with LORE in regards to publishing and expanding the magazine into larger markets? Or will you keep it contained?

RH:  Getting caught up in such things only serves as a distraction, I’ve found. For me, it needs to be fun above all else. That’s what is most fulfilling. We’ll publish a product that we’re proud of, and it will take on a life of its own. Of course, I would like to see forward progress, and am confident we’ll continue to see that.

Having said that, though, we are making a much greater effort to run LORE as an honest-to-goodness business, this time around.

RavMon:  Based on the edition I read, I noticed an H.P. Lovecraft feel and style. Which writers do you most likely compare the overall vibe to? Which one do others tend to compare it with?

RH:  Our first offering this time around was a collection of some very good stories from our first run. Not really a Best of, but just a good representation of what we were publishing at the time. Indeed, the works of H.P. Lovecraft was haunting us all back then. Unfortunately, it seems the Lovecrafty Universe has kind of jumped the shark over the course of the past decade, especially. Cthulhu finds his way into everything nowadays, and has become more of a parody of what Lovecraft intended. A punchline. A meme. So, our tastes continued to evolve over the last ten years, and what we publish in LORE now reflects our present proclivities. I hope this might be maturity.

I guess now I would say what we publish is broader, and authors I greatly admire include Phillip K. Dick, Jorge Luis Borges, and Harlan Ellison. I guess that’s the feel we strive for. We discuss this a bit more in our submission guidelines.

RH:  It takes treasure and time to produce LORE. All of us were in a place where our real jobs were starting to become more … real, and time-consuming. We just couldn’t continue producing LORE to the standards we wanted anymore, at the time, so we thought it was best to discontinue publication before the quality started to reflect our meager disposable time and attention.  I like to think we ended on a high note, as our last issue back then was great!

RavMon:  How can writers submit to be published in LORE? And which genres are you currently seeking? Anything besides horror and science fiction?

RH:  We currently receive hundreds of submissions every month, and have been struggling to keep to anything resembling our stated response time. We’ve just added an Associate Editor, the talented David A. Hill, to the staff to help us with that. Through the coming months, look for us to further expand our staff. Know anyone?

We’ll have a crack at just about anything that can be deemed speculative fiction: horror, SF or fantasy.

RavMon:  How difficult is the selection process for writer inclusion into the magazine?

RH:  It can be very difficult. Sean and I have some different tastes in fiction, in some regards, and on more than one occasion, we’ve debated a particular story for weeks. Soon, I imagine, he will come to the realization that I am always right. In all seriousness, it is especially gratifying when we come across a story that we both love!

RH:  Yes, our web site address is www.lore-online.com. There you can find ordering information, submission guidelines, and other goodies. I also recommend www.theonion.com… just because I love The Onion.

RavMon:  And finally, is there anything you would like to add to this interview? Any concluding remarks or advice for writers?

RH:  We currently pay a professional rate, according to the SFWA and HWA, for short fiction; five cents per word.

Also, you can look for us to release electronic versions of our offerings soon. 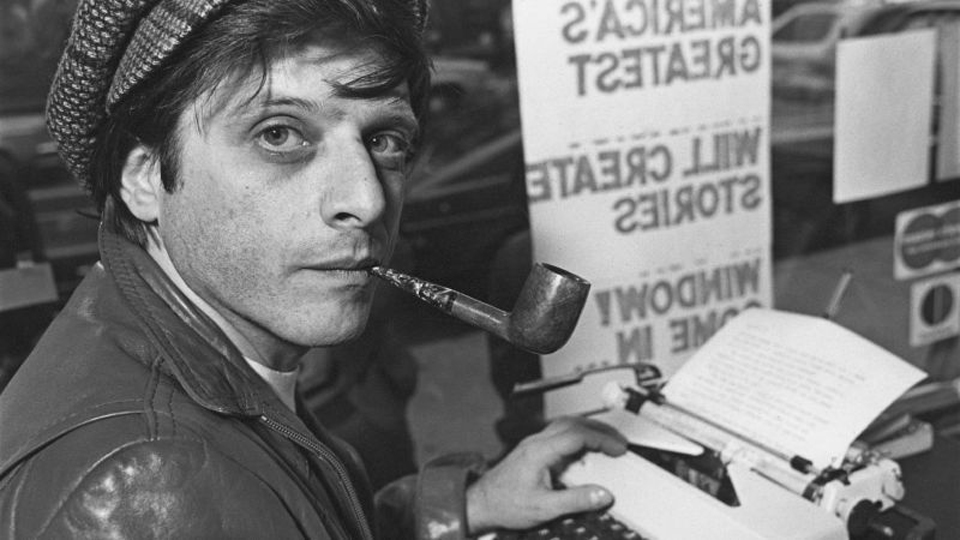