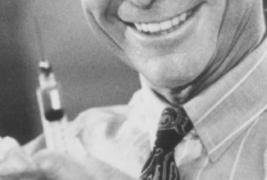 Deadly Doctors 3: Veterinarians of the Vicious and the Voracious

By: Sir Dr. Robert Hibbs (not a real title)

Countless beasts in the animal kingdom should be feared, but none more than the human animal, particularly human beasts of the doctor variety that can manipulate genetics at will.

Sure, there’ve been a lot of advancements in genetic research. I mean we’ve cloned a sheep and some coyotes. That’s useful right?

Personally, I’ve never met a real life genetic scientist, but based on what I’ve seen in sci-fi/horror movies, it seems that the field of genetics is fraught with disaster. So, in this long-anticipated, long-winded, third and final chapter of my failed blog series about horror doctors who are failures, I give you my TOP 5 picks for worst mad scientists who should’ve put their love of animals and masterful scientific abilities towards something other than choppin’ and swappin’ animal DNA. 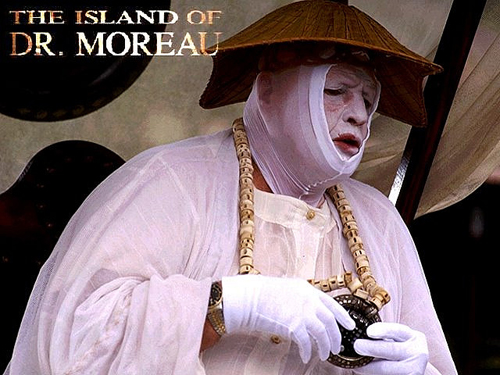 This grunge rock ‘90s edition of H.G. Wells’ immortal classic (directed by John Michael Frankenheimer [Schmidt]) poses the question that no one ever really asked: What would happen if Marlon Brando’s character from Apocalypse Now became a big, fat, tired genetic scientist? The answer: He would exile himself on a faraway island and create a race of genetically mutated animal-people to rule over while he hangs out with a little monkey man (No, I’m not talking about Val Kilmer…I’m talking about this guy).

According to NerdBastards.Com, Leonardo DiCaprio is planning on producing another remake of The Island of Dr. Moreau. Now, I’m not 100% sure if that’s true, but I really hope that it isn’t. I’m probably one of the few who actually liked the ‘96 Dr. Moreau, but I think we’ve said all we’ve needed to say with this story on screen.  However, if the Cap (DiCaprio) is really smart, he’ll pay Disney Pixar to turn Dr. Moreau into an animated feature where the good doctor showcases his talents and daily struggles trying to create a divine race of puppies and kittens that never have to poop or pee.

Though not a legally accredited scientist with any sort of degree or formal training, Martin Brundle (played by Eric Stoltz [the poor man’s Marty McFly]) is a genius human fly (fly-human hybrid?) and the son of scientist Seth Brundle (played by Jeff Goldbulm [the rich man’s Chef Goldblum]). Martin grows up imprisoned in a secret scientific lab funded by Bartok Industries (a made up company) which is trying to profit off of Martin’s quickly advancing mutation while he fights to find a way to reverse it.

Long story short, Martin finds a cure by using greedy-old-man DNA to flush out his bad fly genes. To do this he uses his dad’s trusty, old-fashioned teleportor/gene splicer to swap genetic material with the 60 year old company-head, which kills the old man and revitalizes Martin.

If you look at both movies on one timeline, what you have is an elaborate story about an eccentric scientist who creates a bastard. These are the types of stories that DiCaprio needs to be remaking.

In a fly remake, almost everything should be the same. Seth Brundle (Jeff Goldblum) sets up a teleporter in a dirty, old warehouse, gets his genes spliced with a fly, fucks a woman silly and gets her pregnant all while dealing with the effects of transforming into a revolting fly-man except this time around he’s smart enough to realize that old-people DNA is the key to staving off his fly mutation.  That way you can spend the rest of the movie watching Jeff Goldblum turn into a werefly that stalks and kills old people. He’s eventually stopped, but sent to prison instead of murdered. That way, he can come back in the remake’s sequel where Martin, his hyper-evolved fly-son, breaks him out of prison desperate to team up with his father to find a cure for their shared werefly mutation.  Only Goldblum forces his son into opening the world’s first father/son teleporter travel agency that’s really just a front to kill old people and collect their DNA. 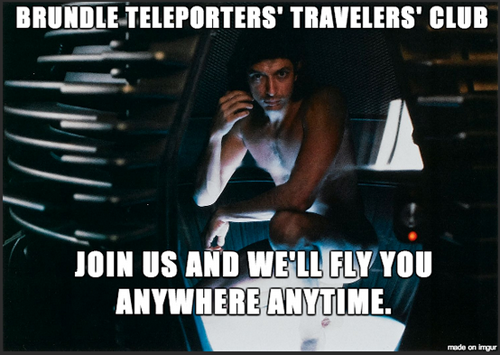 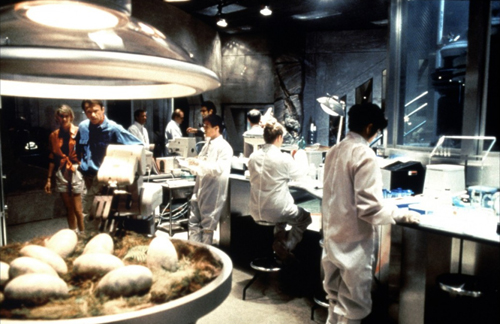 You know where I’m going with this. The movie and book both recognize it’s a bad idea, yet the scientists on the island are clearly greedy bastards who are ignoring the fact that ultimately this whole “real life dino-zoo” is not going to work out. John Hammond’s catchphrase is “spared no expense.” So, clearly those scientists were getting paid to just see what happened with these ridiculous dino/amphibian DNA splicing experiments knowing full well that nothing good would come of it. Since they were so obsessed with money and glory, John Hammond and his team of scientists should’ve turned Jurassic Park into a super-efficient dino-butcher plant to produce and distribute a limitless supply of dino-meat (or at least giant chunks of food) out into the world to feed impoverished masses and renamed the park Jurassic Parts Inc. If that didn’t pan out, he could’ve cloned mammoths or focused just on growing and butchering pigs the size of dinosaurs and sold meat under the company banner Jurassic Pork. If that failed or if they were all really money hungry, maybe they could’ve opened an international chain of small coffee shop versions of Jurassic Park where tiny dinosaurs could be trained to make mocha lattes and called it Jurassic Perk. 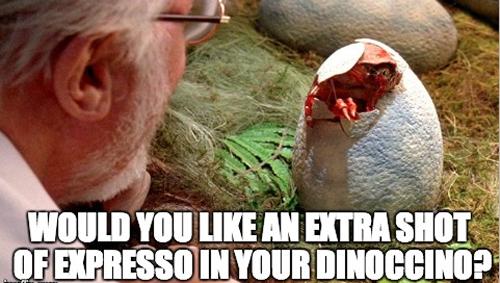 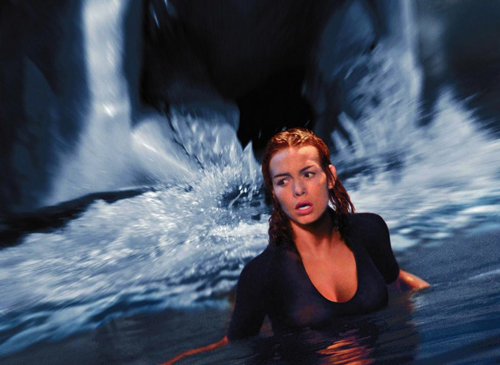 So this Doctor enlarged the brains of Mako sharks which, of course, made them smarter.  Then by studying the brain tissue of the smart sharks she could somehow find a way to cure Alzheimer’s (??)? That’s dumber than an F5 Sharknado. What’s really dumb is that I can see an experiment like this getting funded in real life if it isn’t already underway.

Deep Blue Sea was truly ahead of its time. Watching it now, I could see it as the first movie ever to be inspired by a post on reddit. The basic premise sounds like a story you’d stumble across on the front page of reddit that has thousands of Sam Jackson jokes and page-long debates about atheism threaded in its comments that are all discussed and dismissed in a matter of less than 2 hours before the article is replaced on the front page by a picture of a kitten. I can also imagine a real-life Dr. Susan McAlester as part of some ridiculous real-life covert operation organized by the U.S. Military that’s funding research into making super sharks that could put an end to the war in the Middle East. The end product: Super Solider Street Sharks. 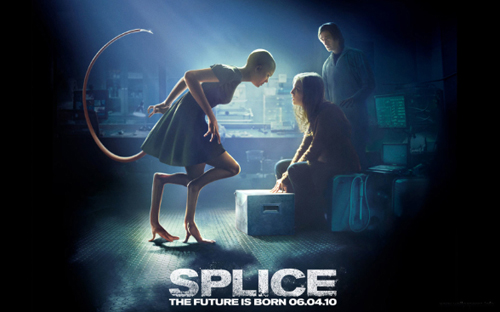 Out of all the mad scientist animal geneticists these two are the worst.

They had a good thing going—steady jobs, worthwhile research in a major scientific field funded by a big time pharmaceutical company, and then Elsa (who was barren) wanted a child so she decided to make her own hybrid baby out of her DNA and some animal genes.  And when it grew up her boyfriend Clive literally fucked it, and then it mutated into a boy and fucked her (That’s what’s up!).  Not even Dr. Moreau boned any of his animal creations (at least not this guy), and not even John Hammond wanted to fuck his dinosaurs (as far as we know). Seth Brundle did fuck Geena Davis to make his son Martin, but he didn’t want to turn her into a fly-woman before they entered the bone zone, and in Geena Davis’ character’s defense she had no idea Goldblum was part fly (though something should’ve clued her in that there was something wrong with him when he fucked her for 7 hours straight).

Anyway, N.E.R.D., the company funding Elsa and Clive’s genetic research specifically tells the scientists not to SPLICE anything with human DNA, but of course they don’t listen. So, they make DREN (nerd backwards) and caring for this ever-evolving humanoid creature consumes their time and energy, which hurts the development of their other worthwhile experiments causing everything to go to hell in a hand basket. Clive fucks Dren, then Dren changes into a male and fucks Elsa and Elsa ends up carrying her baby and somehow after the fuck fest the company funding everything sees dollars signs when they examine Dren’s corpse and pay Elsa hush money as sort of a “Thank you for creating this monster and letting it fuck you. We got a lot of great stuff from it.” What could possibly come from a creation like that or a bastard child spawned by the unholy union of it and Elsa, and who’s to say that her freak kid won’t turn into another rapist mutant!? When that freak kid hits puberty it’s going to be a wild scene and one hell of an awkward conversation between mother and creature about the birds and the bees.

NERD should’ve at least leaked a DREN sex tape to get more people interested in genetic science and their line of DREN products that can help triple your clone sheep production output. 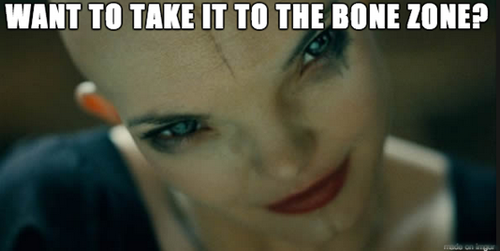 These are just five out of the hundreds of sci-fi horror stories about human’s playing God and they attempt (some better than others) to provide us with cautionary tales about what can go wrong when the boundaries of science are pushed beyond their limits. Like many of the characters in these movies, the world is filled with greedy, ego maniacal, ignorant people and the scariest part is that a lot of them are more intelligent than you may think. Intelligent enough to design monsters for monsters, but not quite wise enough to understand that they shouldn’t be made in the first place. If you take anything from this or any part of this short series of silly blogs, it’s that the horror these types of movies seek to encapsulate is based off the terrifying truth that science in the real world often doesn’t realize that it’s mad until it’s far too late. Beware, be cautious, and don’t get fucked by monsters.