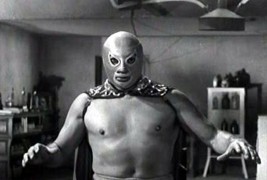 Confession time: I used to be obsessed with pro wrestling. Not only did I go to matches (the big ones and the small, indie ones), but I ransacked the arts and crafts stores looking to make the perfect Ultimate Warrior face paint. I even got in the habit of making title belts out of construction paper, then defending them against my dog and my cat (and the occasional friend who stopped by for a sleepover). In a word, I was a loser.

Well, this loser just recently got back on the fix, and since November, I have been gobbling up pro wrestling videos and interviews like a fat and friendless kid who needs an excuse to go through a whole case of Mountain Dew. In particular, I have been revisiting lost loves (E-C-W! E-C-W! E-C-W!) and finding new obsessions (Botchamania—watch it on YouTube). Also, the historian in me has been dipping here and there into the NWA (National Wrestling Association) regionals and even the AWA (American Wrestling Association).

It is this latter impulse that has brought me into contact with El Santo (aka “The Saint”). Born Rodolfo Guzmán Huerta in 1917, El Santo’s wrestling career stretched from 1934 until 1982. Famous for tag teaming with the incredible Gory Guerrero (the father of the late Eddie Guerrero), El Santo’s in-ring career met with great success, with numerous Mexican and NWA World titles along the way.

But, despite his long career and his importance within the grand history of Lucha Libre (a highly athletic and fast-paced form of wrestling that literally means “free wrestling”), El Santo, also called “El Enmascarado de Plata” (“The Man in the Silver Mask”), remains a folk hero and icon in Mexico mostly because of his numerous and popular films from the 1950s, ‘60s, ‘70s, and ‘80s. In these films, the upright Santo, who embodies the hopes and dreams of the “little guy,” does battle against in-ring rudos (the Spanish term for a heel, or a villain wrestler), werewolves, zombies, vampires, and even Martians. Similar to Batman and the other pulp heroes of yesteryear, El Santo always manages to defeat his enemies using his superior technology, mind, and body.

For North American audiences, the El Santo films can be a little hard to take seriously (or even understand, that is if you don’t speak Español). Most of them are simple and salacious plots wedged in between footage of El Santo wrestling. Frankly, the wrestling tends to be the best part, although, as a longtime fan of wrestlers like La Parka and Super Crazy, I was at first shocked by how traditional and submission-oriented El Santo’s style was (his finishing move was a version of the Camel clutch).

A good example of a typical El Santo film is 1961’s Santo contra los zombies (Santo vs. the Zombies). Although the cinematography of the film is surprisingly good, the film itself is a stinker by any definition. In it, El Santo breaks up a zombie crime ring lead by black-hooded fiends who look a lot like wrestling opponents. In the more well-known Santo vs. las Mujeres Vampiro (Santo vs. the Vampire Women, 1962), the well-oiled and masked man takes down Thorina, the queen of the vampires (played by Lorena Velázquez) and her coven of  vampire priestesses and grunts.

The El Santo films of the early and middle 1960s are the best ones of the bunch, and overall they have proven to have the most staying power. Santo vs. las Mujeres Vampiro was featured in season 6 of Mystery Science Theater 3000, while El Santo derivatives and homages can be found in such diverse places as Hellboy in Mexico (a graphic novel that has Hellboy fighting evil luchadores), Jared Hess’s Nacho Libre, and the video for White Zombie’s “Thunder Kiss ’65.”

In his later years, El Santo featured in films that had alternative and separate adult-rated versions, most of which feature inconsequential scenes that were merely added in to show off the incredible chests of the actresses on set. This is all goofy stuff, and when José López Portillo was elected president in 1976, he wrote his embarrassment of the Lucha Libre horror film genre into law by removing all state-sponsored funding for the films. By the late 1970s, the Mexican movie industry belonged no more to El Santo—by then a tired and bruised old man.

But unlike a lot of wrestlers, El Santo died with some dignity. Known for rarely removing his mask in public or private (he even had a custom mask made for the sole purposes of eating), El Santo remains today one of the foremost cultural heroes of Mexico. And while Gringos mostly associate El Santo with late night movies or with the type of stuff you see playing in Texas convenience stores near the border, El Santo is still upheld in his native country as one of the first popularizers of professional wrestling. And considering how much Mexico loves pro wrestling, that is some legacy.