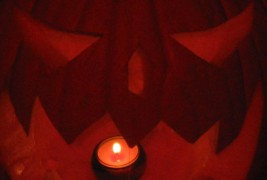 In late October of my freshman year of college, I was failing every creative writing class on my schedule.  My personal narrative, “How I want to be a Horror Writer and Shit” (full text: “I want to be a horror writer because I like to scare people and chicks like guys who are bad boy rebels, like horror authors tend to be. So that’s why I’m here.”) earned me a zero.  I was no better at fiction; my short story, entitled, “Maneater: The Bitch Who Ate People,” earned me no friends among the campus feminists (opening line: “Viola was a hot bitch with DD cup-size, long blond hair, and a bangin’ figure, but she had one problem—she ate her boyfriends like a praying mantis, and I mean that literally.”) or my fellow students.  With midterm grades coming up, I turned with desperation to Rob Johnson, the best writer in the class.

“Simple, Hunter,” he said. “What you’ve got to do is take your laptop down to the crossroads at midnight. This guy dressed in black will come from the west and ask if you need your word processor looked at—“

“I use a PC, not a Mac. Is that going to make a difference?”

I was just a red-blooded young man, interested in passing my classes and “bitches who ate people.”  A soul seemed like a small thing in comparison.  So one Saturday night I snuck down to the junction of Beloit’s W_______  and Y_______  streets with my Dell and waited.  Just when I figured Rob had punked me and I resolved to write a longer personal narrative about what an asshole he was, I heard the sound of footsteps coming from the west.  Before I really registered what was going on, there stood Editor-in-Chief Jason Thorson, his eyes like embers and his hooves wreathed in flame.

“I hear you need your word processor looked at.”

“Yeah,” I said. “Make me a horror author but give me something pretty light on the ‘do this or I’ll take your soul front.’”

He gave a hollow laugh like coals clacking together in a brazier and opened my laptop.

True to Rob’s word, I never saw what he typed, but when he handed the computer back to me, he uttered this terrible pronouncement:

“Now you are a horror writer, but every so often, I will need you to write an article about my minions, the creatures of darkness.”

“Wow, thanks!” I said. “I thought you were going to make me kill babies every full moon or something. This’ll be simple!”

Years went by.  I sold a few stories and had a novel in the hands of a sub-par agent who couldn’t place it.[1]  Things seemed to be following the post-collegiate writer’s lifecycle to the rejection letter.  And then, one dark, wintry day, a scroll arrived in the mail.

Dear Mr. Eden, it began in Mr. Thorson’s distinctive, jagged script, each letter like a shattered bone on that strange and uncomfortably familiar vellum (not sheepskin, to be sure).  I wish you to write an article about vampires. Any take on vampires will do.

And that was the genesis of the first “Ghoulies & Ghosties & Long-Leggedy Beasties” article.  Nothing easier!  Every few months or so, I would get another of those letters, shoot my mouth off about some other kind of monster, and go my merry way.  Until three weeks ago.

Jack o’ lanterns?  Jack o’ fucking lanterns?  That’s not a monster, that’s a DIY gourd/candle mixture.  I cut a new plume, dipped it in my desk inkwell, and angrily scrawled on a handy piece of parchment:

Jack o’ lanterns are not monsters. My wish was to be a horror writer, not a correspondent for Better Homes & Gardens. I’ll write about any monster you want—even something lame like fairies—but I will not write about jack o’ lanterns because they are categorically not monsters and thus explicitly violate the rules of our contract.

I pricked my finger with a needle, affixed a bloodied Forever stamp to the envelope, and shoved it into the hands of the mailman.

A week later, the reply came.

If you can’t find something to say about jack o’ lanterns, I’m afraid I’ll have to lay claim to your mortal soul. Rob Johnson is a bit lonely here and would no doubt love the company. . .

Rob Johnson committed suicide shortly after the last book in the Twilight series appeared.  We can only speculate on what bargain he struck with Mr. Thorson, but I suspect even using a pseudonym like “Stephenie Meyer” wasn’t enough to keep him from cracking under the strain.  I realized I had a line to walk—my very soul depended on it.

I spent most of the last few weeks in a daze, seeking to escape my troubles with absinthe and laudanum and watching for hours as the snow fell across the vast pine forest that abuts my study window.  Walking through the cold streets of my neighborhood, every lit jack o’ lantern grinned at me like a mocking demon, as if to say, “Your soul is ours, Mr. Eden!”

“Like a mocking demon”—that’s when it hit me: Jack o’ lanterns are, in so many ways, the spiritual composite of all our monsters.  Like golems, we use them to bring life to the inanimate.  Vampires?  Roma (gypsy) folklore speaks of vampire pumpkins that would roll around the floor, moaning and dripping blood.  Like werewolves, jack o’ lanterns change the mundane into the monstrous on a seasonal cycle, marking a dark and, dare I say, “eldritch,” holiday.  And it was only a few decades back that a certain director made us aware of the connection between carved pumpkins and serial killers.

So a happy Halloween to you all, Savage Readers.  I think my soul is safe for the time being.  I just need to last until I find a publisher courageous enough to print my upcoming novel, Anthropophage: The Disagreeable Female Who Consumed Her Paramours.

[1] In retrospect, it occurs to me that I should probably have wished to be a competent or successful horror writer.