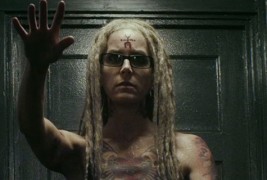 Sadly, The Lords of Salem will probably not be coming to Egypt, but I did meet a witch once—and I mean a real one, not some pentacle-bling Wiccan wannabe.  My consultation with him cost about fifty pesos, including the eggs.  You had to buy eggs for the witch to do his work: he cracked them over a glass of water and read the way the yolk swirled to diagnose your problem.  He had a craggy, pitted, unshaven face and big, crooked teeth.  He wore a sweater and khakis and the slip-on leather shoes that were popular in Mexico the last time I was there.  The witch told me that somebody envied me, creating evil energies that caused my persistent anxiety.  He said he would cure me, but advised that I burn copal and mint incense regularly to keep free of the contagion in the future.  But what struck me more than the verdict was this: the brujo had a waiting room.

I remember sitting there with people from all the little surrounding towns, the only gringo.  I saw elderly Indian women in shawls, and younger people in less traditional clothes.  You came in, bought your eggs, and took a number.  When the witch called your number, you consulted with him in a separate room.  Doctor-patient privacy and all that.  The people in that waiting room didn’t have psychiatry or self-help.  They had witchcraft, brujeria, and they believed in it.  Belief is at the core of the way we think of witches.

Belief, like magic, is often inherently illogical.  How many of you did I piss off when I used the phrase, “pentacle-bling Wiccan wannabe” at the beginning of this article?  I’ve got to be honest with you, savage readers—I don’t find Wicca remotely convincing.  Ancient paganism was an epic and complex worldview encompassing light, dark, and all shades of gray, not a simple equation of a Jungian God and Goddess that make everything happy and harmless.  I’m sorry, but I don’t think any of you Wiccans are witches.  “You’re by and large lovely people, with every right to believe what you wish, but I’ll never consider you witches,” said the guy who paid fifty pesos to have his eggs read.  Why is a Mexican brujo a witch—a real witch—but the pentacle-wearing Wiccans are wannabes?  Illogical belief.[1]

Even when I hated colonial history as a seventh grader, I thought the Salem Witch Trials were pretty fascinating.  Like the Donner Party or H.H. Holmes’s murder hotel, the Trials were a perfect storm of American horror.  In the spring of 1692, a group of girls in Salem Village (modern-day Danvers, Massachusetts) were stricken with a psychosis that caused them to hallucinate, scream incoherently, and convulse.  A local physician, at a loss for a diagnosis, suggested that the girls (including the local reverend’s daughter) might have been bewitched.  By the time the Trials had run their course, a little under two hundred citizens of Salem had been accused and nineteen hanged.  One old man was pressed to death.[2]

It’s a historian’s cliché to suggest that the outbreak of hysteria that struck Salem Village in 1692 was influenced and exacerbated by the experience of its Puritan residents as a solitary, superstitious people in a frightening wilderness, a new Canaan,[3] but it’s also hard not to see in the Witch Trials the birth of a richly American Gothicism, filled with evocative images of cone-hatted magistrates presiding over the gallows and Devil’s Sabbaths in the woods.  Nathaniel Hawthorne (himself descended from one of the justices who presided over the Witch Trials) mined this homegrown tradition in his story Young Goodman Brown, which has a Puritan businessman encountering the Devil and his extensive coven of witches in the Massachusetts wilderness.[4]  Lovecraft’s The Dreams in the Witch-House combines Salem lore with Cthulhu by way of the jaw-dropping proposition that witches weren’t actually using magic at all, but hyper-advanced mathematics taught by Nyarlathotep.[5]  The folklore from which these stories (and many others) were drawn is vivid, but belief is central to witch-based horror in an even darker way.

Decades before Arthur Miller used the Trials as a critique of McCarthyism in his 1953 play, The Crucible, the term “witch-hunt” was already a byword for panicked scapegoating.  Here’s the scariest part: American hysteria about witches preying on children didn’t end in the 1690s.  In a book entitled Michelle Remembers, author Michelle Smith recounted—from recovered memories—a childhood full of gruesome Satanic rituals, including frequent molestation at the hands of a demonic cult which included her parents. [6]  Despite being patent bullshit, Michelle Remembers was a bestseller for its day—and when I say “its day,” I mean 1980.

Smith’s book touched off a decade and a half-long scare over “Satanic Ritual Abuse.”  Michelle Remembers was followed by Laurel Rose Willson’s Satan’s Underground, an equally bullshit but even more sensational account of Willson’s adolescence in a Satanic cult, in which she was repeatedly raped into bearing children for sacrifice.  Accusations of Satanic Ritual Abuse spread to daycare centers and preschools, their respective staffs charged en masse with ritual pedophilia based on the testimonies of preschool children.  These testimonies, obviously coached by the cadre of psychiatrists who swooped down wherever the accusations sprung up, included details almost as unlikely as those featured in Salem three hundred years before: flying, being raped by clowns, watching a lone Satanist kill and drink the blood of an elephant, and the revelation that Chuck Norris was a pederastic warlock.[7]  Some of these allegations were corroborated by Laurel Rose Willson.[8]

The accused “Satanists” were ultimately cleared, but I’m struck by the fact that this occurred in my lifetime, in the rational, scientific, late-twentieth century United States in which I grew up.  Even in 2004, while I was visiting a real witch in a small village in Mexico, the last ripples of the Abuse scare still hadn’t dissipated completely.  In fact, Google “Satanic Ritual Abuse” when you finish this article and I bet it won’t take you long to find somebody (a “victim,” maybe or, scarier still, a therapist) who adamantly insists that a worldwide network of devil-worshippers is raping children and sacrificing babies right now, in your very town.  The therapists shouldn’t surprise us, I suppose; John Hawthorne never expressed remorse for his part in the Salem Witch Trials either.  But while you and I may argue about what aesthetic of witchcraft we prefer, it’s hard to deny that the real horror isn’t what we believe about witches, but what we do with that belief.

[1] Also, I would argue that people like the brujo are part of centuries-old, organic traditions with rich folkloric pedigrees, whereas Wicca got started in the 1950s by a bored civil servant.  One man’s opinion, you understand.

[2] Used as a means to elicit confession, this was a nasty way to die. The subject lay under a wooden platform upon which one heavy rock at a time would be piled until either a) the subject confessed or b) he or she got crushed. When Giles Corey bravely refused to dignify his accusers with a plea, the Salem Village court subjected him to pressing. It took two days for him to die.

[3] I’m sure the Algonquins felt differently.

[4] Hawthorne’s story is a powerful indictment of religious hypocrisy.  It’s also an awesome horror story you can slot between Poe and Lovecraft in your timeline of American horror.

[5] It’s not one of Lovecraft’s absolute best, but I’m very fond of this story of an increasingly unhinged college student persecuted by a space-time traveling witch and her rat-like familiar.

[6]Who was actually Canadian, but you know these things catch on. Insert Justin Bieber joke here, savage readers.

[8] Willson went on to cement her status as a heinous bitch by pretending to be a survivor of Auschwitz and defrauding Holocaust charities of thousands of dollars when being a Satanist-turned-Evangelical Christian no longer paid.