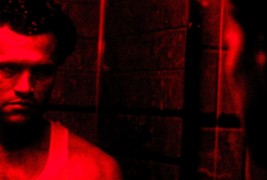 I recently saw, for the first time, Henry: Portrait of a Serial Killer, a film based partially on the life of real world serial killer Henry Lee Lucas. Directed by Jon McNaughton, the film portrays Henry as an itinerant ex-con, rooming with an old prison buddy named Otis and his sister Becky.  We know from the beginning that Henry (masterfully played by Michael Rooker) is a compulsive murderer. The slow zooms on female corpses in the first five minutes testify to that.  Henry is softly-spoken, shy, even likable.  He acts chivalrously towards Becky, protecting her from the advances of her perverse brother.  We’re almost lulled into seeing him as an anti-hero–the sort of basically decent guy Flannery O’Connor portrayed in “A Good Man is Hard to Find.”  And like O’Connor’s story, Henry springs a brutal trap on us.

I’ve heard people talk–almost invariably women–about how serial killers are admirable. “They’re just independent thinkers, freed from society’s constraints,” said one.  In many, many horror movies, serial killers are approached one of two ways.  First, either as heroes of a sort, killing people who in a fictional sense we don’t regard as worthy of life–jocks, assholes, sluts, obnoxious businessmen.  Sometimes this approach can be done well–I loved Dexter, for reasons I’ll get into in a moment.  Hannibal Lector, though in some ways a very likable character, still works for me as a sort of ultimate monster.  Usually, it falls flat.

The second approach is to show serial killers as the builders of complicated killing machines (a la Saw), the sort of things Rube Goldberg would have built if he’d been a sociopath instead of a cartoonist.  The killings are usually performed in service to some abstract ideal that’s basically noble but has become twisted. The only way to beat the killer is to break out of his machine and confront him. Maybe this has some sort of symbolic freight for people in our society, but for me, this too falls short.

The reason both these tactics usually fail, I think, is because they both ignore the fundamental horror of serial killers: they are people who have no empathy for other human beings. Totally self-centered creatures, serial killers feed off the idea that they’re misunderstood. I guess a disturbing attraction to serial killers among some women who see them as rebel bad boys freed from social strictures shouldn’t surprise me; Ted Bundy got tons of letters from adoring female admirers.  While sitting on death row. For raping and killing women.  It’s the basic fantasy of “I can change him.”

(And don’t get me wrong, guys have fantasies that are as stupid, but there just aren’t as many female serial killers and Aileen Wuornos wasn’t exactly a hottie.)

Serial killers aren’t scary because of how they kill their victims; it’s why that’s so chilling.  A serial killer is scary because, rather than being a bold rebel willing to step beyond the constraints of society’s most basic rules, he is in fact bound more tightly than we can imagine to a compulsion and a limitation: the inability to feel guilt.  In Henry, the main character is utterly baffled and awkward at Becky’s romantic interest in him.  He isn’t a suave Hannibal Lector-type, but a half-made, hollow caricature of a human being.  He can be down-home and friendly, but it’s all in service to a deeper need.  Most serial killers can’t claim insanity in court because, quite simply, most of them aren’t insane.  Rather than being colorful madmen with unique philosophies, they’re mundane, limited and frequently enough (despite claims to the contrary), not especially bright.  Spending an afternoon talking to a serial killer would probably be about as interesting as a lunch date with a low-IQ compulsive masturbator.

A dumpy, quiet guy who spends his time loitering around watching women he regards as attractive before shooting them and sexually mutilating the bodies with a kitchen knife is far more scary than Jigsaw, or the guy in Law-Abiding Citizen, or any of a thousand other films about grandiose psychopaths with political manifestos writ in blood.  I think, actually, that the Jigsaws of the world are kind of tamed and dumbed down.  It’s easier to identify with a guy, say, who wants revenge on all policemen for the fact that his father was beaten and killed by a police officer than our hypothetical dumpy, quiet guy who wants to cut the genitalia off women’s corpses for his personal use.  It softens the blow, leading to this spate of “serial killer as hero for butchering Paris Hilton” films.  That said, I’m not immune: Paris Hilton getting speared through the eye was the highlight of the otherwise completely inferior remake of House of Wax.  But it’s not reality, and it wasn’t scary.

Earlier I said I made an exception for Dexter, a show that is at least honest about what its main character is.  He feels a need to kill–an almost sexual compulsion that he can’t really control.  He reminds us frequently that he doesn’t understand the emotions other people feel.  He’s a hero only because he had something most serial killers don’t: a stable home life with a father who recognized what he was.  We’re always reminded, though, that he could have been another Dahmer, Manson or Gacy.

One thought on “Ghoulies and Ghosties and Long-Leggedy Beasties II: Serial Killer Chic”