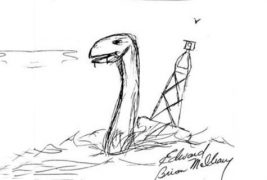 There’s a vital distinction between sea monsters and every other kind of monster: Sea monsters scare the living shit out of me, and I’m not ashamed to say it. What’s scarier than looking into the murky water below you and seeing the barnacle-encrusted back of a massive, silhouetted shape cruising within kicking distance of your feet? Zombies? Admit it–you would love to be caught up in a zombie apocalypse. Werewolves? Superhero cool, but not frightening. Vampires? Grow the fuck up.

But my guess is that there’s something under the rubric of “sea monster” that makes you shudder no matter how far inland you live. Saltwater crocodiles are the world’s largest reptile, reaching twenty feet in length. They potentially devoured up to 400 Japanese troops trapped in a swamp during the World War II Battle of Ramree Island. The colossal squid (yes, bigger than its merely “giant” co-squid), has rotating hooks on its tentacles that it uses to fight against sperm whales.  And as long as we’re on squids, let’s touch on the Humboldt squid, five feet of frighteningly intelligent hydrostatic skeleton with a propensity to travel in shoals and attack divers. Some consider them more threatening than sharks.

Oh, there I did it; I said the “s” word.  The rarity of shark attacks (pigs kill more people on a yearly basis) is cold comfort, given that the result is absolute horror, rendering the human body into a chummy mess bagged like badly chopped meat inside a ragged wetsuit.  Nor is it a relief that only a few species attack human beings: great white, tiger, bull, oceanic whitetip. . .Haven’t heard of the last one?  They were responsible for the largest shark attack in history, the U.S.S. Indianapolis tragedy, in which the survivors of a sunken American cruiser (again, World War II) were whittled from 880 down to 321 due in no small part to opportunistic sharks that smelled the blood of wounded sailors.

But there’s something to sea monsters beyond shark and crocodile attacks: good old Lovecraftian fear of the unknown.  Take the McCleary case, from 1962.  A teenager, Edward McCleary, and a few friends were out diving on a foggy night, swimming for a wreck off the coast of Pensacola, Florida.  At once, they smelled something foul and heard a strange noise, and a long-necked reptilian monster with a turtle-shaped head (with green eyes, no less) attacked, killing each of Edward McCleary’s companions before he made it to the relative safety of the wreck, swimming back (most likely in abject terror) at daylight.

There is every reason to believe that this “sighting” is a pile of steaming bullshit that flowed smoothly from the rectum of human credulity without a single undigested bit of truth aside from the fact that there is a town called Pensacola, Florida and it was in existence as far back as 1962.  The “but, coelocanths!” protestations of cryptozoologists make it no more convincing. Nor do evangelical Christians, who see the case as proof that prehistoric reptiles survived the Flood.  Evidently, some folks tried to track down McCleary a few years back, and there’s some question as to whether he ever existed outside of this story, which appeared in reliable, peer-edited Fate magazine.  There is no logical reason to lend it a second’s credence.

It’s haunted me for years.

To the part of my brain that feared the shadows in the deep end of the pool at ten, that saw plesiosaurs when I opened my eyes in the turbid water at Ocean City, that felt a rising fear floating in a lake in upstate New York, watching my legs hang down in the deep, brown water, the McCleary case is a perfect crystallization of everything that’s frightening about the sea and its monsters: We just don’t know.  Every year, people win the lottery and get struck by lightning.  Even if the odds are a billion to one that anything like McCleary’s monster has ever coexisted with human beings, there’s always that slight chance that my next trip to Pensacola could end with being dragged out to sea and torn apart in a cloud of my own blood by a (hungry? Territorial? Malevolent? Does it even fucking matter?) plesiosaur.

Shit floats. But so do bodies.