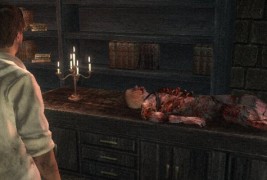 I recently got my hands on a subscription to GameFly.  It’s usually a bad idea to enable my addictions, but I’m weak-willed, and it’s easy to rationalize this sort of purchase.  After all, if you buy a new game more than every few months, the subscription basically pays for itself.  And more importantly, it gives you the chance to play things that you wouldn’t have put down the cash to own.

Which is, of course, how I ended up playing Rise of Nightmares.

The game isn’t exactly new.  I remember its release in September of 2011.  At the time, I considered buying a copy, if only to justify my irrational, deep-seated love for my Kinect.  After reading a few reviews, I decided against it for practical reasons:  Paying $60 for a game with just 10 hours of story hardly seemed like a worthwhile investment.  But, given the opportunity to try it out for essentially nothing, you can bet I was on it like flies on a corpse.

Now, before we get to Rise of Nightmares and what it can or can’t do for horror gaming, let’s take a moment to talk about survival horror as a genre.  Officially, it got its name in 1996 with the release of the original Resident Evil, but survival horror was really born in 1992 with Alone in the Dark.  This game spawned a popular franchise with several sequels and a major film, but it also laid down the framework for future horror games.

Plenty of games have scary components without being survival horror.  The definitive quality of a survival horror game is a sense of desperation and anxiety.  You have limited resources and an overwhelming number of foes.  You can’t just hack and slash your way through the enemy; you have to use strategy, solve puzzles, sneak past monsters and budget your resources.

In this way, video games provide the most authentic horror experience of any medium.  Part of the appeal of horror for many fans is the sense of empowerment and catharsis.  Horror allows us to face our fears and overcome them without ever being in real danger.  But unlike haunted houses and scary movies, horror games put you completely in the driver’s seat.  By placing you inside of the situation and allowing your actions to directly impact what happens, games come as close to putting you in real danger as possible while keeping you safely confined to your living room.

With that in mind, you would think that immersing you completely in a game would add to that horror.  In theory, a motion-capture game that requires you to really move around as you interact with the scary world should be twice as terrifying.  It should, in theory, provide the perfect horror experience.

Which is exactly the hypothesis I wanted to test by playing Rise of Nightmares.

The game itself is nothing particularly spectacular.  You play as Josh, an alcoholic with relationship issues.  You and your wife, Kate, are on a train ride through Eastern Europe, possibly in an attempt to rekindle your romance – which would probably work better if you were sober for any part of it.  But that doesn’t matter, because soon your wife is kidnapped by a monster, the train derails, and you have to navigate a graveyard/mansion/torture dungeon full of mechanized zombies made by a mad scientist, occasionally aided by obscure tape recordings left by a poncy English P.I. 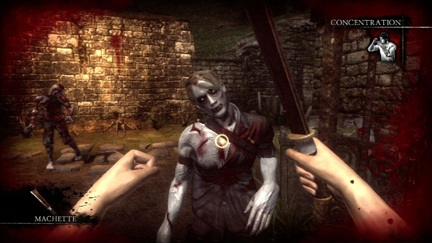 If you’re thinking, “This game doesn’t make any sense,” that’s because it doesn’t.  And that is, in a strange way, part of its charm.  If you’ve ever wondered exactly what it would feel like to be thrust in the middle of a really terrible made-for-TV horror movie, Sega will give you that experience.

What makes Rise of Nightmares noteworthy is, of course, its game mechanics.  It’s the first – and, as far as I know, only – Kinect-based survival horror game, and it inspires the same feeling of, “Oh, that’s clever!” as most other early motion gaming attempts.  If you throw yourself head-first into the game, ignoring or embracing all of its cheesy and derivative characteristics, it can be genuinely fun.

When you have to swim out of a pool, you dog-paddle or breast-stroke your way out.  When you’re attacked by a swarm of bugs, you really flail around swatting them.  And when you hack and slash your way through zombie hordes, your arms really do end up exhausted.  Sure, the controls occasionally misfire, causing you to drunkenly stumble into spiked walls, and the camera is maddeningly fixed in place, making it impossible for you to see the zombie that’s gnawing on your shoulder until you turn around to face it.  But as far as early attempts go, it shows some potential.  It certainly has the possibility to draw you in and immerse you into a horror story the way no other game can.  Surely someone will take the technology, streamline it, and make a genuinely terrifying immersive horror gaming experience?

At the end of the day, everything that makes Rise of Nightmares effective as a game also undermines the horror genre.  You have to play it in a well-lit room so the Kinect’s camera can recognize you, so there’s no opportunity to dim the lights and enjoy the spooky ambiance.  You can only play for a few hours at a time before you start getting exhausted from the standing, jumping, hacking and slashing, so you can’t get fully drawn into the story.

Perhaps worst of all, you become all too familiar with your personal limitations and weaknesses.  Instead of pulling on the skin of a grade-A badass, you become painfully aware of just how out of shape you are.  If your heart’s pounding while playing Rise of Nightmares, it’s probably because running across those floating rail cars is the most exercise you’ve gotten all week – not because the game is scary.

In a strange way, pulling you into the game has the ironically inverse effect of keeping you outside of it.  Not a moment passes where you can forget that you’re playing a game and get absorbed into the story.  This is the ultimate failing of motion games, and it’s probably the reason why nobody’s rushed out to make another Kinect horror game.  I’m not saying I wouldn’t give motion gaming another try for the right game, but right now, it’s looking pretty clear that the future of survival horror isn’t down that path. 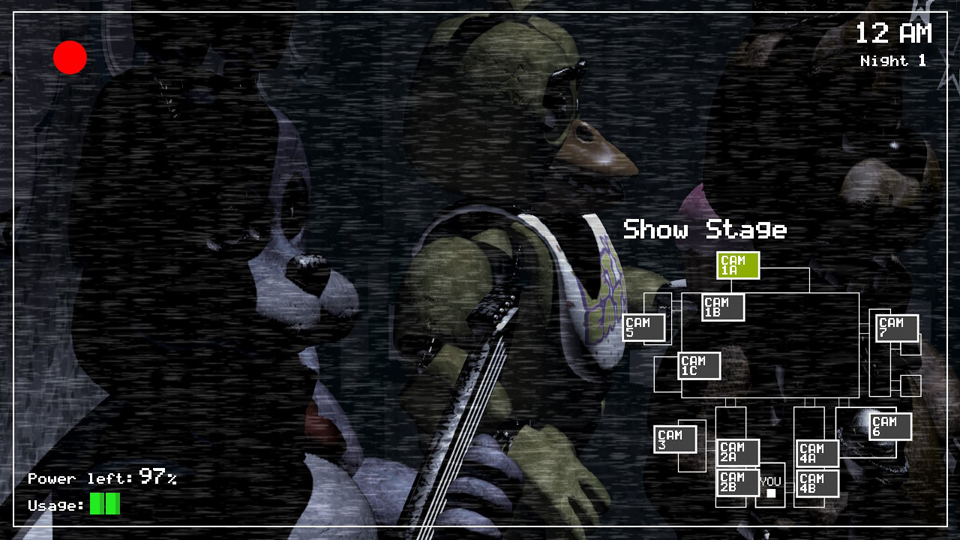