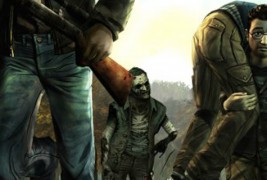 Although I live in a household of dedicated PC gamers, I’ve always had a special place in my heart for console games.  There’s something about their finite nature that’s a comforting break in pace from the usual open-ended social gaming experience, and they’re cozy – you curl up on the couch with a controller and it’s just you and the game until the story’s finished.  It’s a bit like sitting down with a good book and seeing it through to the end.

I’ve never had that experience quite as thoroughly as while playing Telltale Games’ The Walking Dead: Season One.  It’s the kind of game you sit down to try out, then look up to realize it’s suddenly 2 AM and you have no idea where the time’s gone.

Of course, I’m hardly the first person to have discovered its charms.  It’s picked up a fair share of “Game of the Year” awards by the likes of USA Today, Wired and Spike Video Game Awards.  Even though it’s been out in various platforms since early 2012, I’d somehow never bothered to pick it up.  Probably because I’m experiencing a bit of disenchantment with the whole Walking Dead franchise and the last thing I wanted to spend time and money on was another derivative TV tie-in game.  If you’ve been avoiding the title for the same reason then let me put your mind at ease, this game is anything but a cheap spin-off.  If anything, it’s a breath of fresh air in a franchise that feels pretty exhausted at times.

The game itself is a third-person graphic adventure with visual styling more reminiscent of a graphic novel than the usual photorealism CGI used in most modern games.  Because a lot of the game is built on a foundation of interactive cut scenes, the art directors have the ability to use a lot of creativity in the visuals.  This leads to interesting choices in camera angles and other visual cues that make the whole experience a lot more cinematic and atmospheric than you’ll find in a standard zombie game.  Coupled with superb writing, gut-wrenching action and fantastic voice acting, you’re looking at a real gem of a game. 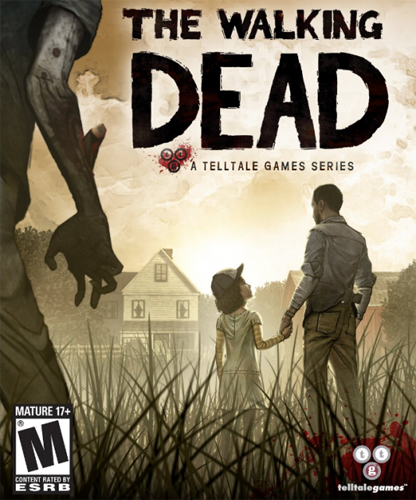 You play through the adventure as Lee Everett, a history professor and convicted murderer.  The game begins with you in the back of a police car, being transported to prison.  Before the opening credits are even done rolling you have to start making choices about what to say to the police officer.  You’d better be careful though, every choice you make affects what happens in the game and you have a limited amount of time to make each call.

Before too long all hell breaks loose.  The cop car collides with a Walker and sails off a bridge, and after that you’re literally thrown head first into a battle for survival.

Along the way you pick up several companions, of whom the most important is Clementine, a little girl you take under your wing.  A good chunk of the game is spent trying to protect her and make the right choices to keep her safe and in one piece.  Lucky for you, this isn’t the usual kind of tedious “hostage protection” game you might be accustomed to; keeping Clem safe has a lot more to do with the choices you make than slavish following of game mechanics.

In fact, there’s few mechanics to worry about in this game.  Although the graphic adventure style isn’t for everyone, there’s a certain appeal to it and even more so for the casual gamer.  If you often find yourself missing out on the usual survival horror fare because FPS mechanics frustrate you, this game offers the ideal compromise.

The interface is straight forward; you move with the left analog stick and navigate the screen with the right stick.  When you find something that can be used or examined you can click it with the appropriate action bar.  During conversations you’ll have several responses to choose from.  These choices affect the flow of the narrative and the outcome of your story.  When you do come into combat the majority of the fighting is accomplished through the speedy tapping of reaction buttons.

If all of this sounds boring it’s only because you haven’t started playing it yet.  Think of it less as a video game and more of the most interactive and engrossing film you’ve ever watched.  You’re calling the shots and – in true Walking Dead fashion – nobody is guaranteed to be safe.  Sometimes you have to choose between saving two companions, sparing the life of a villain, or sacrificing someone for the greater good.  Every choice carries weight and the characters are so well-drawn and perfectly acted that every loss is like a punch to the gut.

The game is divided up into five separate “episodes” each with its own dramatic arc.  However, events from one episode carry over into the next and you bring your choices with you.  Sometimes a decision you make early on can come back to haunt you much later and the full ramifications of your choices might not catch up to you for a long while.  After the fifth episode you can also play a DLC called “400 Days,” which is not directly connected to the main story but ties into things obliquely.

And good news-if you’re aching for more walker-killing action and intense plotting after the last episode is over, you can continue the story, even importing all of your choices from the first game, in the sequel, Season Two.  Like the first game, it’s being sold in increments but you can pick up a “season pass” to save money on each installment as it comes out.  The whole game should be finished by fall of this year.  You can keep up with game news here.