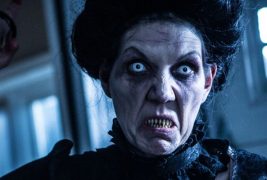 Lizzie Borden meet Lilith Ratchet. She stole your modus operandi if not your mojo. Liz preferred an axe, Lil a hatchet. But the biggest difference here is that one is a real-life original, the other a cheap imitation stuffed into a cheap film with cheap effects.

Oops, I just gave away the thrust of this review: American Poltergeist: The Curse of Lilith Ratchet is a whole lot duller than the sharp implements of torture employed by our chop-chop chicks. (Mea culpa alert: Yes, sadly I opted for alliteration over political correctness in choosing that synonym for women.)

Anyway, nothing like getting to the point. If that’s enough for you, see ya later. If you want details, read on.

Lilith Ratchet, in fairness to director and writer Eddie Lengyel, gets off to a decent start. Friends Lauren (Brianna Burke) and Alice (KateLynn Newberry) stumble across an ornately carved wooden box while shopping in a trendy store. Inside, so we’re told, is the shrunken head of one Ms. Ratchet, whose backstory is juuuuuuuust a little evil. You know: Lilith Ratchet took a hatchet yada yada yada.

Anyway, the clerk says the box, which includes a poem meant to initiate a game, isn’t for sale. But when he disappears for a bit, the girls steal it.

They track down Hunter Perry (Rob Jaeger), host of a popular paranormal radio show, who checks out the Lilith story and buys the box and head for $200. So far so good.

But about 30 minutes in, the plot inconsistencies start. Lauren and Alice just met Hunter, but suddenly it’s as if they’re all longtime best buds. So, too, the girls’ boyfriends, Nate (George Tutie) and Dylan (Roger Conners).

Hunter and girlfriend/assistant Bree (Angela Cole) decide the Lilith game is good fodder for a live broadcast from a heavily advertised “blowout” party at a local club. Now I don’t know about your definition of a big bash, but the couple of dozen people in attendance would seem to me something more along the lines of a small gathering.

Anyway, Hunter, Bree and our aforementioned couples begin the game by tossing Lilith’s head-around in hot-potato fashion. Little do they know — but of course WE do, this being the cliché-ridden knock-off it is) — all hell is about to break loose.

There isn’t much originality or, for that matter, genuine scares in the mayhem. The gore is restrained, and what little of it you see isn’t particularly realistic. When Lauren is killed in her bathtub, there’s minimal blood even though her mother is told her daughter slashed her wrists. Dylan takes a couple of good whacks in the head with ol’ Lil’s hatchet, but the splatter is mostly left to the imagination.

I could go on, but if after this review you’re still of a mind to see it, why spoil the goods?

But believe me, this is a carbon copy of a hundred other flicks you’ve seen before, albeit with worse acting, dialogue and plot than the bulk of them.

Now this was made for about what it takes to max out your typical credit card. So the pedestrian sets, the lighting, the music and, yes, the acting reflects the result. Of particular note is Jaeger’s horrid inability to show real emotion when Bree buys the farm. I’d call it a wooden performance, but that would be an insult to pine trees everywhere.

All that said, there is a redeeming quality, and that’s our pal Lilith, played silently by Crissy Kolarik. Her makeup is appropriately creepy, and the first few glimpses of her with that funereal dress and those long, black fingernails is unnerving. But creepy turns to cartoony by film’s end, and that lessens what otherwise might have been a quasi-interesting climax.

The Curse of Lilith Ratchet is part of a series under the American Poltergeist umbrella. It’s available through ITN distribution.

Oh, and a final note. I’m a music lover, so it pains me to have taken a poke at the score, particularly knowing it was written and performed by Timothy Smith, keyboardist in the goth band Lestat. But honestly, even though there are a couple of spooky synth sounds here and there, most of this spartan score is woefully inadequate. I’ve heard kazoos with more nuance and tone than what Smith delivers here.