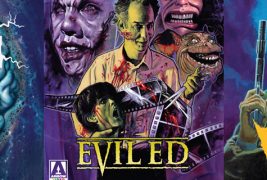 Arrow Video’s offerings to the shlock gods for the month of May run the gamut, but the one thing all these movie releases have in common is a membership to the Cult of Weird.

Read on to get all the juicy giblets, Horror Fans….

May sees the release of a fantastic slate of cult cinema from Arrow Video, with a healthy mix of giallo, cult crime and gore to keep fans happy.

First comes The Climber, starring cult actor Joe Dallesandro (Flesh for Frankenstein, Blood for Dracula). The Climber is a prime example of Italian crime cinema and follows the rise and fall of Dallesandro’s small-time drug dealer, Aldo. Filled with brawls, fistfights, shootouts and explosions, this is an excellent action-thriller. The other big crime release of May is Cops vs Thugs, Kinji Fukasaku‘s masterpiece and one of the greatest films to come out of 1970s Japan. Echoing other great crime films, Cops vs Thugs is set in a world where there is no honor among thieves – or cops for that matter – and personal honor and duty among friends means everything. Wolf Guy, meanwhile, sees Shinichi “Sonny” Chiba star as a lycanthropic detective who uses his wolfish powers to solve crimes. One of the rarest and most sought after films from Japan’s Toei Studio, Wolf Guy is pure 1970s with violence, action, nudity, and a psychedelic score.

For gorehounds, May also sees the arrival of two grisly Limited Edition classics. Brain Damage is Frank Henenlotter‘s bad taste head trip that follows parasitic Elmer (voiced by late night TV horror host, John Zacherley) and his ability to induce euphoric hallucinations in the people he comes across. However, his trips come with a nasty side effect and leave the victims scouring the streets for Elmer’s favourite food – brains! – resulting in some of the best bad taste gags in cinematic history. Later in the month, Evil Ed gets a Dual Format Special EDition release. This ode to the splatter flicks of the 1980s unfolds gore scene after gore scene as a mild-mannered film tech loses his grip on reality after being forced to watch hours of grisly film footage. The result is a smorgasbord of flying limbs, exploding heads, busty babes and creepy creatures! A must for splatter fans everywhere. 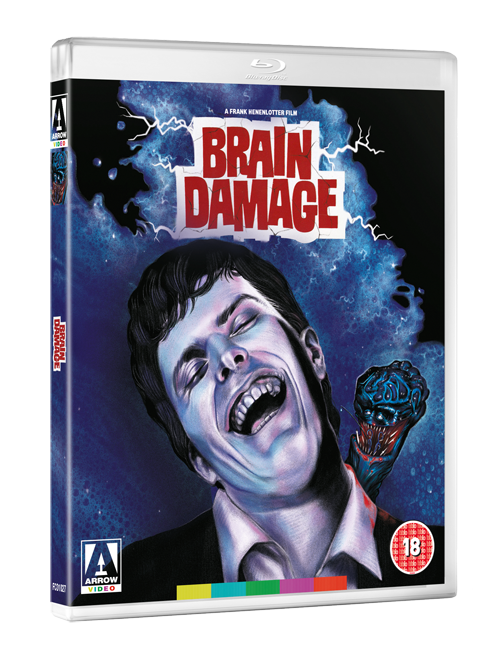 IT’S A HEADACHE FROM HELL!

From Frank Henenlotter, the man behind such cult horror favourites as Basket Case and Frankenhooker, comes Brain Damage – the ultimate head-trip, now finally on Blu-ray!

Meet Elmer. He’s your local, friendly parasite with the ability to induce euphoric hallucinations in his hosts. But these LSD-like trips come with a hefty price tag. When young Brian comes under Elmer’s addictive spell, it’s not long before he finds himself scouring the city streets in search of his parasite’s preferred food source – brains!

Featuring late TV horror host John Zacherley as the voice of Elmer, Brain Damage boasts some of the most astonishing bad taste gore-gags ever realized, including the notorious “brain-pulling sequence” and a blow-job that ends with a distinctly unconventional climax.

– Collector’s Booklet with new writing on the film by Michael Gingold, illustrated with original archive stills and posters 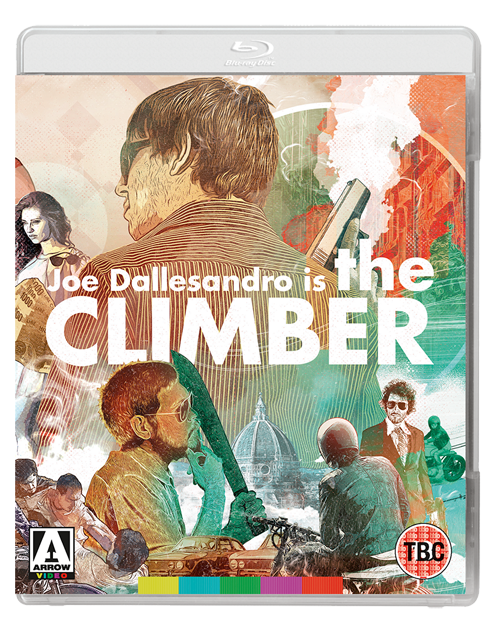 After shooting cult favorites Flesh for Frankenstein and Blood for Dracula in Europe, Joe Dallesandro spent much of the seventies making movies on the continent. In France, he worked with auteurs like Louis Malle and Walerian Borowczyk, and in Italy he starred in all manner of genre fare from poliziotteschi (Savage Three, Season for Assassins) to nunsploitation (Killer Nun).

The Climber follows in the tradition of gangster classics such as The Public Enemy and Scarface as it charts the rise and inevitable fall of small-time smuggler Aldo (Dallesandro). Beaten and abandoned by the local gang boss after he tries to skim off some profits for himself, Aldo forms his own group of misfits in order to exact revenge…

Written and directed by Pasquale Squitieri (Gang War in Naples, I Am the Law), The Climber is a prime example of Italian crime cinema – a high-octane action-thriller full of brawls, fistfights, shootouts and explosions!

– Brand new 4K restoration of the film from the original negative

– Little Joe’s Adventures in Europe, a brand-new interview with Joe Dallesandro on his numerous European film appearances during the 1970s and early 1980s 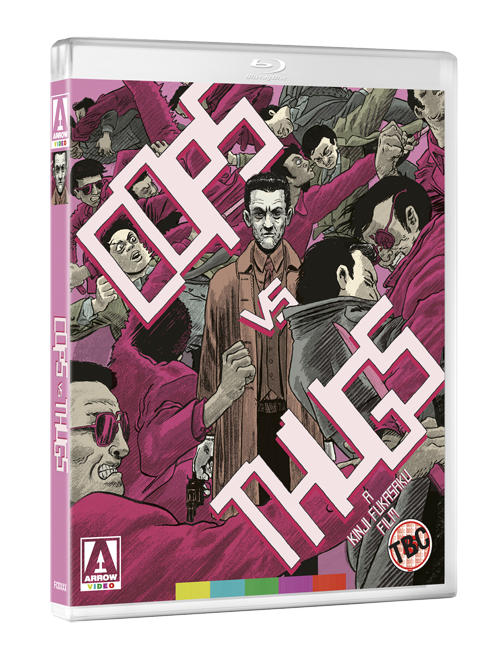 Considered by many to be director Kinji Fukasaku’s greatest single-film achievement in the yakuza genre, Cops vs Thugs was made at the height of popularity of Toei Studios’ jitsuroku boom: realistic, modern crime movies based on true stories taken from contemporary headlines. Returning to the screen after completing their Battles Without Honor and Humanity series together, Fukasaku joined forces once again with screenwriter Kazuo Kasahara, composer Toshiaki Tsushima and star Bunta Sugawara to create one of the crowning achievements of his career, and a hard-boiled classic which is still ranked as one of the best Japanese films of the 1970s.

It’s 1963 in the southern Japanese city of Kurashima, and tough-as-nails detective Kuno (Sugawara) oversees a detente between the warring Kawade and Ohara gangs. Best friends with Ohara lieutenant Hirotani (Hiroki Matsukata), he understands that there are no clear lines in the underworld, and that everything is colored a different shade of gray. But when random violence interrupts the peace and an ambitious, by-the-books lieutenant (Tatsuo Umemiya) comes to town, Kuno’s fragile alliance begins to crumble. Greedy bosses and politicians alike seize the opportunity to wipe out their enemies, and Kuno faces the painful choice of pledging allegiance to his badge and keeping a promise to his brother. Echoing the great crime films of Sidney Lumet and Jean-Pierre Melville, in Fukasaku’s world, there’s no honor among thieves or lawmen alike, and the only thing that matters is personal honor and duty among friends.

Kasahara’s shattering screenplay and Fukasaku’s dynamic direction support an all-star, ensemble cast to create one of the most exciting, and deeply moving films about cops and criminals ever made.

– Beyond the Film: Cops vs Thugs, a new video appreciation by Fukasaku biographer Sadao Yamane 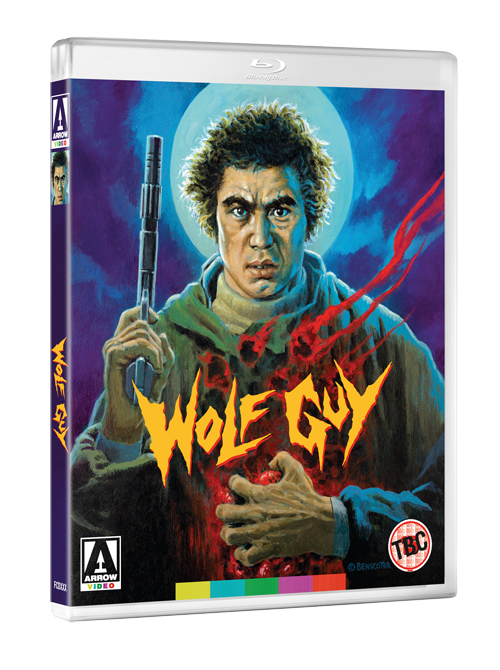 Shinichi “Sonny” Chiba is a martial arts “manimal” in the ultra-70’s, 100% bizarre mixture of horror, action and sci-fi that is Wolf Guy, one of the rarest and most sought-after cult films produced by Japan’s Toei Studio. Based on a manga by Kazumasa Hirai (creator of 8 Man), and never before released outside of Japan, it’s a genre film classic waiting to be discovered and a completely unclassifiable trip into phantasmagoric funk.

Chiba stars as Akira Inugami, the only survivor of a clan of ancient werewolves who relies on his supernatural powers to solve mysterious crimes. After a series of bloody killings perpetrated by an unseen force, Inugami uncovers a conspiracy involving a murdered cabaret singer, corrupt politicians, and a plot by the J-CIA to harvest his blood in order to steal his lycanthropic powers! At the same time, Inugami also discovers the truth behind his family heritage, and that he may not be the last of his kind.

FIRST PRESSING ONLY: Illustrated collector’s booklet featuring new writing on the film by Patrick Macias and a history of Japanese monster movie mashups by Jasper Sharp 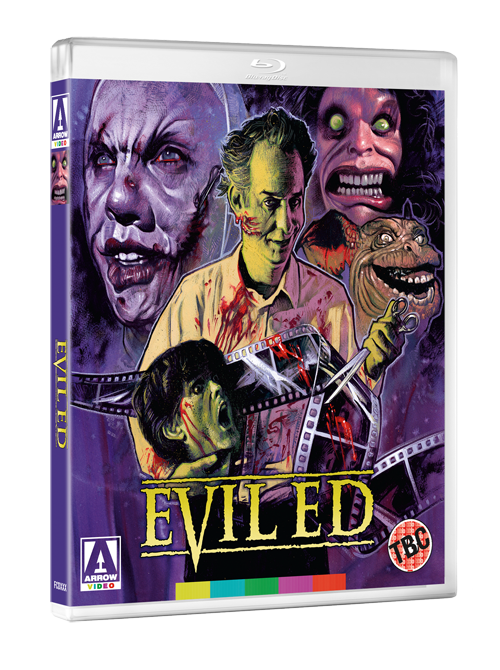 WHEN HIS MIND BLOWS, ANYTHING GOES!

A blood-soaked love letter to the splatter films of the ’80s, video rental favorite Evil Ed returns in a brand-new Special EDition featuring an extended cut of the feature and hours of stomach-churning bonus features!

Mild-mannered film technician Edward enjoys his job. That is, until he finds himself transferred from his regular post to the “Splatter and Gore department”, where he’s forced to edit hours upon hours of grisly video nasty footage. Traumatized by the onscreen violence, Ed starts to lose his grip on reality – with ghastly (and bloody) consequences…

Owing a debt to films such as The Evil Dead, Re-animator and the early splatter classics of Peter Jackson, Evil Ed is a veritable smorgasbord of flying limbs, exploding heads, busty babes and creepy creatures!

– Two versions of the film!

– Collector’s booklet with new writing on the film

– Reconstructing Edward – featurette on the creation of the Special EDition cut