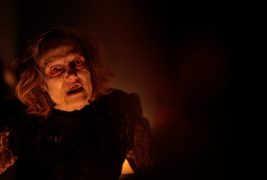 Most of us have a creepy relative or black sheep tucked somewhere into the recesses of our family. They’re whispered about, often avoided and, on occasion, laughed at … NOT in the best sense of comic relief.

Enter Aunt Marion, the strange object of disaffection in Barry Jay’s directorial debut, Ashes. Auntie M’s weirdness is on full display at the get-go, from her reaction to her husband’s death to her eerie nighttime meanderings to her self-inflicted dentistry. Yeah, she’s earned the black sheep label sister Caroline pins on her.

So, when Marion bites the dust and is cremated, it’s no surprise her ashes are unwanted in the home of Caroline’s daughter, Ellyn. What to do, what to do?

The setup for all of this is an unexplained documentary (rather, mockumentary), which has Caroline (Elaine Partnow) and Ellyn (Elizabeth Keener, sister of Catherine) addressing the cameras with hilarious banter, talking over one another with zeal. Ellyn’s brother Jay (Brandon Lamberty) pops up to offer his own anecdote about Marion, the time years back when he donned a clown mask and scared the pee out of her — literally — on Halloween eve.

So, you’re learning the frivolity at Marion’s expense could be borderline cruel. Marion didn’t like all that mean-spirited laughter. But she’s a pile of ashes now. What could go wrong?

Just about everything, of course. Ellyn’s family — husband Duane (Jeremy Isaiah Earl) and daughters Camille and Melanie (Angelique Maurnae and Yumarie Morales) — are perplexed as to why they have the ashes, not to mention what to do with them. They reside briefly in a closet, a drawer, the attic — all while strange things begin to occur, including a dream in which Ellyn is certain her father was telling her to get them out of the house.

But maybe Marion is exactly where she wants to be, with payback in the cards for all that vicious laughter. 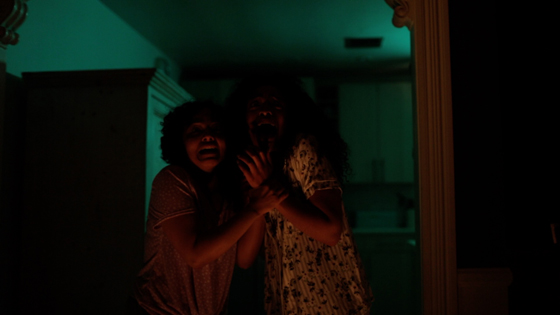 When Caroline suffers a stroke, the latest of several misfortunes to befall the family, the decision is made to cough up some dough and bury Marion’s ashes at a cemetery. But in a scene both absurdly funny and horrific, Ellyn and Duane drop the container, sending the ashes hither and yon — on the living room floor, the furniture and up Ellyn’s nostrils. Instead of coughing up dough, she coughs up a mess of tangled gray hair.

Soon Ellyn’s appearance begins to change, aging her in the most unflattering way. Her daughters opt into Ellyn’s paranormal theories, including the use of a homemade Ouija board, with an ill-chosen egg slicer as the planchette.

Things really turn nasty when Marion’s “friend” Gail (Maria Olsen) arrives, only to turn a bathtub into her crypt. Even the paranormal investigators comically known as The Polter-Guys strike out as the family searches for help.

I don’t want to give too much away, because Ashes has some real jolts, particularly when Marion — wonderfully played by the fortuitously named Melinda DeKay — is on screen. But I will tell you the film is less than the sum of its parts. The dialogue is often hokey, and the plot and casting strains credulity at times. Apart from offering no explanation for the cameras (this is not a found footage premise), there are times when you’re left scratching your head. Why, for example, would the father, Duane, desert his family at the hour of their greatest need? Why does the oldest daughter Camille look nearly as old as her mother (pre-aging)?

And what are we to make of such a disjointed script, written by director Jay? This is perhaps as much a comedy as an exercise in horror. Truth be told, at times it’s laugh-out-loud funny, and those were my favorite scenes. But instead of delving into camp, Jay tries to serve two audiences and the end-product suffers. It turns Ashes to ashes, you might say.

Still, there’s enough here to like that you won’t feel cheated. As Marion would tell you, she who laughs last laughs best. 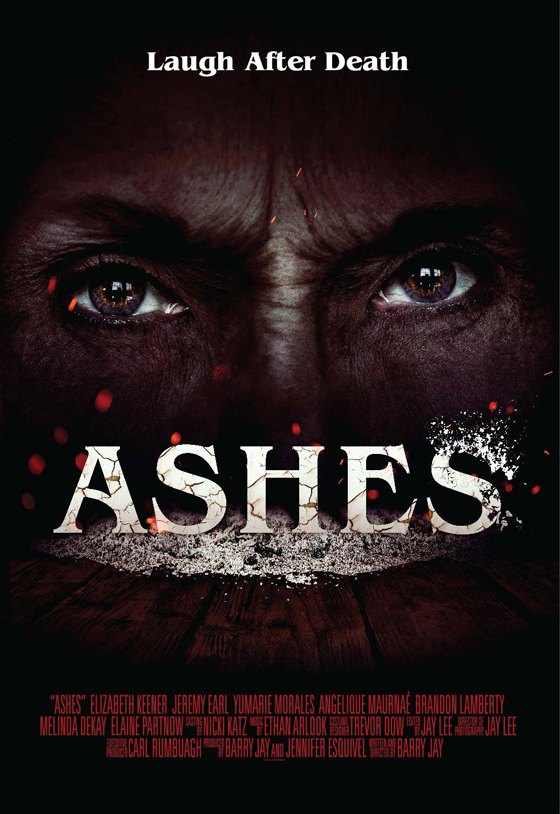