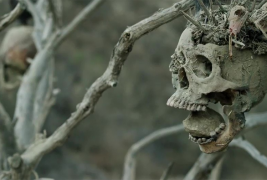 Bone Tomahawk fittingly begins with someone’s throat being cut. Even more fittingly, it leads to an argument ABOUT throats being cut. This gives you an idea of both the merciless violence and pitch-black humor that drives Bone Tomahawk, a bloody tale of the Old West.

The dirty swine doing the mayhem is one Mr. Purvis, an uncouth robber and killer. Purvis and his even scruffier partner Buddy have just stumbled upon some unfortunate souls sleeping in the rough West Texas scrubland. Seeing as how Buddy and Purvis make their living, they cut the throats of the sleeping men in casually brutal fashion. Purvis has a little trouble with the last victim leading to a tongue lashing from Buddy who tells Purvis there are 16 major arteries in a man’s neck area, any one of which can be cut with silent efficiency. Purvis protests, saying there is no way a man has that many arteries in his neck.

The gruesome debate, delivered with bone dry solemnity, establishes the tone of Bone Tomahawk, a 2015 independent film done for the princely sum of $1.8 million dollars and which has emerged as one of the most praised films of that year. It has since acquired a cult reputation for its mixture of Western grittiness and gory cannibal horror. It is my intention to look further into this peculiar movie.

The star power is remarkable for such a low-budget feature. For example, Purvis is played by former comic superstar David Arquette (Scream, Ravenous), virtually unrecognizable under a thick coat of grime and beard stubble. Buddy is portrayed by none other than the venerable Sid Haig (The Devil’s Rejects, Spider Baby), who any fan of grindhouse or underground cinema should recognize immediately.

The central figure of Bone Tomahawk, Sherriff Franklin Hunt, is played by none other than Mr. Kurt Russell (The Thing, Escape from New York), who in his later years is well cast as the grizzled, tougher than shoe leather Sherriff Hunt. The word is that Russell was so impressed by S. Craig Zahler’s script that he signed on to the movie for just scale pay. Other major stars here include Patrick Wilson, Matthew Fox and Richard Jenkins, with some delightful cameos by Sean Young, Michael Pare and James Tolkan.

A friend of the Good Doctor (yes, there is such a thing) remarked that Bone Tomahawk was the perfect combination of the classic American Western and the gore of Italian horror. That’s remarkably accurate, but I’d say the movie leans more towards the former than the latter. But when that gore comes, you better have a strong stomach, because it is every bit as gut-churning as any Italian cannibal film. As for the Western feel of the movie, it is sparse and hard, reminiscent of movies like Unforgiven and Pale Rider.  Given the tight budget, this makes sense, so don’t expect a lush and epic vision of the Old West here. 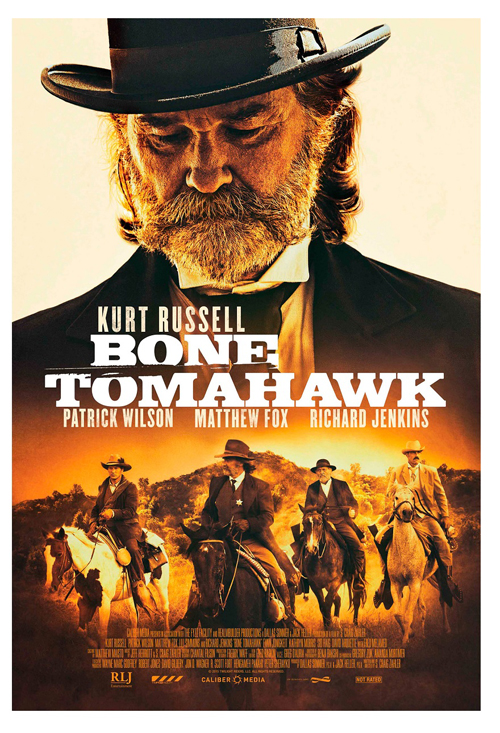 I was actually familiar with writer/director S. Craig Zahler’s name before Bone Tomahawk came out. At one time, he was a prolific journalist in the world of heavy metal and even performed in some underground bands like the black metal Charnel Valley and the classic/power metal Realmbuilder. Those bands were known for their direct but articulate lyrics and that carries over into the dialogue of Bone Tomahawk, which is one of its chief pleasures. Every character in the film (with the exception of the man-eating troglodytes) talks like a well-educated academic, even in the most earthy situations. The debate between Buddy and Purvis in the opening minutes is a good example of Zahler’s droll dialogue.

Let’s look further at the plot of Bone Tomahawk…

Eleven days after the scene that opens the movie, Purvis arrives in the barely-there town of Bright Hope, which is basically a wide spot in the road. But despite its smallness, the town boasts the two necessary elements of frontier life…a saloon and a sheriff. The saloon is called the Learned Goat and the sheriff is Franklin Hunt. When Hunt’s eccentric “back up deputy” Chicory tells him that a scruffy stranger is in town and has buried some kind of loot, Hunt investigates and confronts Purvis at the bar. Wasting no time when Purvis evades questions, Hunt simply shoots him in the leg and has Chicory take him to jail where they can interrogate him later.

Hunt wants Purvis’ leg patched up but the town doctor is on a raging drunk. He dispatches the cold-blooded gunman and town resident John Brooder to bring Samantha O’Dwyer, who has nurse’s training to help. Samantha is a right pretty filly who is busy tending to her husband Arthur, who is bed-ridden with a badly broken leg. The leg doesn’t prevent the couple from having a healthy round of sex where the attractive Samantha begs Arthur to “please continue.”  They finish just in time for Brooder to bring Samantha to the jail to tend to Purvis. She remains there along with Hunt’s deputy Nick.

Later that night, an eerie howling is heard in Bright Hope and a stable boy is horribly murdered in a barn. The killing is especially savage as the boy is ripped open as if by an animal. Then it is discovered that the jail has been raided…Samantha, Nick and Purvis are all missing.

A meeting of locals is held at the Learned Goat to discuss the incident. Despite his injured leg, Arthur O’Dwyer is dead-set on riding out to recover his beloved wife. Sheriff Hunt consults a Native American authority called The Professor to see if the missing have been abducted by Indians.  He is told that the captives may have been taken by a mysterious group of cannibal troglodytes who inhabit a godforsaken area called “The Valley of Starving Men.” Other Indians shun the valley out of superstitious fear and do not consider the troglodytes to be true men. It is likely that the drifter Purvis stole some trinket from their sacred burial ground and they came to retrieve it and him.

A party of four men is assembled to go into the valley and rescue the captives if they can. But they must move quickly because the troglodytes will almost certainly devour them in time. The posse will be led by Sheriff Hunt and accompanied by Brooder, Chicory and O’Dwyer. Brooder proclaims that he has had great experience in killing Indians. “That is an ugly boast,” says The Professor, to which Brooder replies, “That is no boast, but honest fact.”

The four set out across rugged, outlaw-haunted country in search of the Valley of the Starving Men. Almost immediately they are at odds with each other. Chicory is quite the eccentric character, with some very unique thought processes on the borderline of lunacy. This is a good place to mention that Richard Jenkins, who plays the aging Chicory, pretty much walks off with the whole movie. His delivery of bizarre dialogue is faultless and the source of a lot of black humor. In one memorable scene, as he and Hunt face almost certain death, he begins rambling about whether a flea circus that visited Bright Hope was real or a sham. Despite the gore and grimness of the situation, Chicory provides a lot of laugh out loud moments in the movie.

Arthur is played by Patrick Wilson with a dogged determination to go on that borders on the suicidal. His broken leg becomes a huge issue during the movie, as it continues to get worse and worse. Eventually, Hunt and the others must go ahead and O’Dwyer has to play catch up in the dangerous territory. Some of these scenes of Arthur virtually crawling through the desert are pretty grueling to watch.

Brooder is played with cold blooded precision by Matthew Fox. Brooder admits at one point that he has killed 116 Indians during his career, after his mother and sister were murdered by them. Yet there are a couple of scenes where his façade cracks and we see a vulnerable man underneath. He reminded me a bit of Robert Vaughn’s character in The Magnificent Seven.

That leaves the veteran Kurt Russell as Sheriff Hunt. Hunt is a man in the twilight of his career but he’s not going down without a fight. He has a stiff and stubborn streak that stands tall even when confronted with the horror of the cannibals. He shows his grit in spectacular fashion during the final confrontation with the troglodytes. This is a great part for Russell in the twilight of his own career.

After enduring outlaws and harsh terrain, the posse finally enters the Valley of the Starving Men and now the movie swerves from dusty Western to bloody horror. I won’t spoil what happens, but one character is slaughtered in the most revoltingly gruesome fashion I’ve seen in a movie. The violence of this particular demise is right up there with the most explicit moments of The Walking Dead, Cannibal Holocaust, Zombie, you name it. It will also leave you wondering how they did it…if you have the strength to watch the whole scene.

In the best spaghetti-Western tradition, the movie ends in a confrontation that brings out the best in our main characters even as they are exposed to the grisliest fates imaginable. I won’t spoil that for you, but you might just have a lump in your throat at the end.

Bone Tomahawk winds up as an old-fashioned lesson in how to create time, place and character with a minimum of budget. If you’re a horror fan who hasn’t seen many Westerns, this might be an eye opener for you. If you’re a Western fan with a strong stomach, you’ll enjoy the sparse authenticity of the setting. And if you’re just a movie fan period, I can still recommend it.