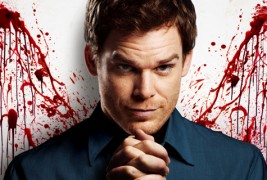 DEXTER SEASON 6 is in the books and I feel like I should be in mourning.  No, not because the hit Showtime series is built on a foundation of death, homicide in particular, but rather it seems as though last year’s fear that the show had jumped the shark has in fact been proven true.  It turns out that a Rita-less DEXTER is a rudderless ship.

This year, Dexter (Michael C. Hall) is looking for the Doomsday Killer(s).  The pressure mounts on Miami Metro Homicide to catch a killer as Book-of-Revelations-inspired serial murders mount up around the city.  The murderous entity, dubbed DDK, is comprised of Professor James Gellar (Edward James Olmos) and his former student Travis Marshall (Colin Hanks).  However, Dexter first suspects an inner city mechanic named Brother Sam (Mos Def), a born-again ex-con who ends up befriending Dexter and piquing his spiritual curiosity.  When Brother Sam is killed by one of his “flock”, Dexter tracks down the assailant and murders him; defying Sam’s dying wishes and throwing off any hopes of finding God.  Dexter inevitably continues hunting DDK setting up a revealing cat and mouse game culminating in a few surprises, some of them good, some of them bad.

In Subplotland, Dexter’s sister Deb (Jennifer Carpenter) is promoted to Lieutenant at Homicide while her relationship to a downward-spiraling Quinn (Desmond Harrington) implodes after she turns down his marriage proposal.  The promotion puts her directly under the antagonistic thumb of her nemesis, María LaGuerta (Lauren Vélez) which compounds her mounting stress.

After being ordered to attend mandatory therapy sessions for her involvement in a shooting, Deb takes full advantage of her access to Miami Metro’s psychologist.  It’s during these sessions when Deb reveals that she may have romantic feelings toward her adopted brother.  Trust me when I write that this is far more frightening than any of the murder shenanigans this season, but I digress.

Dexter’s hunt for DDK, Deb’s burgeoning taboo crush, and their convergent paths toward the truth provide for the biggest cliffhanger in the history of the series.  It will leave you dying for the start of Season Seven, pun intended.

So why do I feel like mourning?  Because when Trinity murdered Dexter’s wife Rita at the end of Season 4, he inadvertently killed the series’ engine of narration.  Without an intelligent, benevolent foil such as Rita, Dexter no longer has to risk all that he holds dear, including their relationship, to pursue his needs.  He still faces conflict and he’s still up against antagonists with homicidal intent, but without clearly defined risks (other than the obvious ones), those conflicts only provide muddled, unmotivated tension.  And Dexter’s relationship with his two-year-old son doesn’t suffice.  This is drama and toddlers don’t make for dynamic characters.  Michael C Hall might as well be in front of a green screen, playing to a tennis ball attached to a stick.  Meanwhile, the show’s left spinning its wheels without a true protagonist.

While Season 6 isn’t quite as bad as Season 5 was, in some ways it’s worse.  For example, this season’s major twist – the true nature of Professor Gellar – reveals the show’s reliance on an unreliable narrator, an unforgivable sin in storytelling circles.  Also, Debra’s romantic feelings toward Dexter provide a salacious, naughty angle to explore, however, the series’ writers had never planted any hints in seasons past to leave that door unlocked for potential exploration.  As such, Deb’s sudden hots for her brother are unmotivated, unbelievable, and gratuitous.

There are bright spots to be sure, but none of them get fully developed or resolved.  For example, Mos Def’s breakout performance of the season as Brother Sam is outstanding.  His presence on screen is that of an A-list heavyweight and his scenes crackle with compelling dialogue and subtle tension.  In fact, Brother Sam fills the dramatic void left by Rita’s death in that he provides the benevolent and intelligent foil to Dexter, one that both influences and challenges him.  Unfortunately, his character is killed off midway through the season, an event that has inexplicably little impact on the remainder of the season.

There are other intriguing subplots that follow similar fates.  Dexter’s forensics partner, Vince Masuka (C. S. Lee) invites a computer-wiz lab intern named Louis (Josh Cooke) to assist him in examining the evidence from the DDK murders.  By the end of the season it seems Louis has developed an obsession with Dexter while also possessing stolen evidence from the Ice Truck Murders.  Even Deb’s promotion and Quinn’s downward spiral are left flapping in the breeze.  Hopefully some of these threads will be resolved next season.

Finally, no analysis of DEXTER is complete without taking a good look at the bad guys.  On paper, the names Edward James Olmos and Colin Hanks should elicit genuine excitement.  Character actors of this caliber have the potential to ascend to the upper ranks of DEXTER antagonists, right next to Jimmy Smits’s Miguel Prado and John Lithgow’s Trinity Killer.  However, as is the case with several elements of Season 6, the characters of Professor Gellar and Travis Marshall don’t quite meet expectations.

This problem resides on the page more than within the performances.  Edward James Olmos plays one note.  Olmos is an incredible actor and watching him have to play a character conceived and written as flatly and one-dimensionally as Professor Gellar is almost criminal.  Colin Hanks gives a worthy performance as Travis Marshall, but he doesn’t cut the most chilling arch nemesis figure in television history, let alone in the history of this shows’ pantheon of fantastic baddies.

Overall, the DDK concept works, but the execution is a little over the top and hard to buy.  At certain points throughout the season the murders get into SAW territory with Rube Goldberg-level complexity muddling up the characters’ realistic and disturbing psychopathic compulsion to kill.  Anytime fiction mixes homicidal maniac with super villain, a little bit of scary gets lost in the concoction and I get annoyed.

While DEXTER SEASON 6 is a marked improvement over last year’s gag-worthy portrayal of Dexter and Lumen tag-teaming their petulant, annoying nemeses, the show’s still got problems resulting from the same issues.  In order for DEXTER to regain its footing, the show’s creators need to pair Dexter with an adult character who will serve as a counterpoint to Dexter’s “dark passenger”.  The series thrived on portraying Dexter’s attempt to reconcile his dark side with his attempt to function in a family unit with Rita and her children, and later their own child.  That inherently tense and dramatic dynamic is the successful thrust of the first four seasons and it’s what’s been sorely missing ever since.

Sadly, DEXTER SEASON 6 is just one dramatic element shy of greatness and so just like last year, I’m left hoping for a return to form next season. 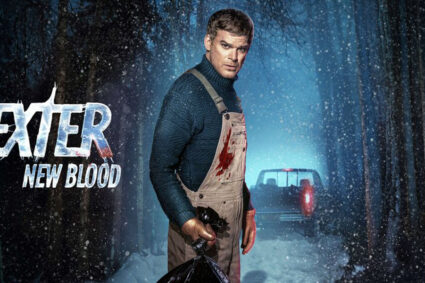