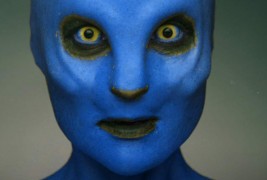 Face Off, the new reality series on the Syfy television network, has been a long time coming.

Sometime around 1984, a couple video rental places sprung up in my hometown.  My mother, always trying to keep her head above water with regard to technology, had a VCR and immediately got memberships to these video rental places.  I was eight years old and already enthusiastically giddy about Jaws, werewolves, Jason Voorhees, the Wicked Witch of the West and a myriad of other monsters I’d been exposed to through the omnipotent idol of children everywhere – the television.  But those new fangled video tapes contained the most disgusting, depraved, and delicious terror imaginable.  It was the stuff an eight-year-old’s dreams are made of.

After my first trip to rent movies with my mother, my life had changed forever.  I’d go along as often as the opportunity presented itself and I’d search the shelves high and low, scanning those empty display boxes for pictures containing masked maniacs, bladed weaponry, vicious creatures, aliens, blood, and boogiemen.  And believe me when I say that I rented anything that met my depraved criteria.

Throughout the subsequent years, I learned “horror movies” inside and out.  And during these formative years, my horror rock stars weren’t the John Carpenters and George Romeros of the world.  I was all about the FX artists.  I grew obsessed with names such as Tom Savini, Rick Baker, Rob Bottin, and Dick Smith.  These incredible artists along with many others were responsible for a new wave of unprecedented movie imagery, featuring graphic gore and shocking creatures.   Movies like The Thing, The Howling, American Werewolf in London, The Exorcist, and Day of the Dead, blew my preteen mind and, collectively, that gore and those creatures served as my umbilical cord to the genre.

In the early 1990’s, movies like The Abyss, T2, and Jurassic Park ushered in the era of CGI, using computers and powerful software to create literally anything the imagination could conjure, relatively cheaply and free of logistic impossibilities.  Suddenly, the FX Aces of my youth were considered obsolete and were deemed an endangered species.

Scrounging for gigs, some FX artists took jobs on genre television shows, while others switched gears all together and went after acting and directing gigs.  But as the state of physical special FX went so went the state of the horror genre which atrophied throughout the 90’s.  Fortunately, there was a backlash as fans weren’t receptive GCI-heavy horror’s ineffective disconnectedness.  By the time the 2000’s arrived, horror movies sporting physical FX were a hot commodity again among true horror enthusiasts.  FX houses such as KNB EFX Group and artists such as Wayne Toth were back to scoring high profile horror gigs.

Now, Syfy is bringing the next generation of fleshing ripping monster makers to the masses with Face Off, airing Wednesday nights at 10/9 Central.  Face Off is a competition in which prospective special-effects make-up artists are asked to complete weekly challenges, showcasing a wide range of skills including sculpting, painting, and prosthetics.  The contestants’ creations are judged by a panel that includes Academy Award winner, Ve Neill (Beetle Juice, Edward Scissorhands, Pirates of the Caribbean), Glenn Hetrick (Buffy the Vampire Slayer, Heroes, The X-Files), Patrick Tatopoulos (Underworld, Independence Day, Resident Evil: Extinction), and a weekly guest panelist.  The panel determines a weekly winner who then consults with the panel to decide which contestant gets eliminated and goes home.

There are two schools of thought when it comes to approaching reality TV.  There’s the voyeuristic approach, popular on MTV-style reality shows in which we essentially watch people of various backgrounds and personalities forced to cohabitate as drama is manufactured by producers to exploit the tensions inherent to the group.  The other approach is the one popularized by Food Network in which contestants who possess a similar skill set are asked to compete against one another in a match of those skills.  In other words, talented chefs cook food, and talented bakers bake treats, and expert judges pick a winner.  So far, Face Off has opted to employ the latter approach, although after 4 episodes, there have been a few unfortunate instances of unnecessary drama, more appropriate for tripe such as Jersey Shore.  Even so, the show’s future looks bright.

The existence of Face Off is good for the horror genre on many levels.  For one thing, it signifies that there’s enough demand by fans to justify a television series.  And on the other side of that coin is the fact that this show will bring the FX element of horror films to a much wider audience – an element that grabbed me and many other horror enthusiasts as kids and never let go.  This will create even more demand for genre material.  And at a practical level, Face Off’s exposure of up and coming talent will help the industry discover and cultivate the next generation of FX artists.

As a fan and a writer, there’s something very exciting about being privy to the innards of the almighty horror flick.  My connection to horror movies has advanced and grown much more complex over the years, but that initial visceral connection to the blood and the monsters is still primary and absolutely thrilling.  Syfy’s continued delivery of quality, dynamic genre fare, on standard cable television no less, is a dream come true.  And just as I do now, the eight-year-old version of me would have been tuning in and watching Face Off in rapt attention.