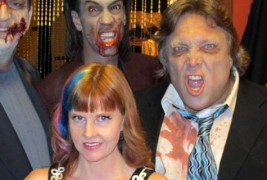 Stop me if you’ve heard this one before: A California kid with creative parents grows up to make a living in the entertainment industry. The end.

This cliché does and most emphatically does not describe filmmaker Staci Layne Wilson—dad’s a Rock & Roll Hall of Famer as a member of The Ventures and mom’s a prolific gossip columnist and novelist. It’s true that Wilson seems fated to have found her calling in and around hometown Hollywood. But that’s way too simple.

Wilson, a journalist who cut her teeth covering the horror genre for the likes of Fangoria and Rue Morgue among others, has begun establishing herself as a budding genre auteur in her own right, having written and directed two recent features and having several short films and other credits already under her belt. She has, in fact, become a prolific writer and now a filmmaker, only the topics are gloriously gonzo and the movies are grotesque and bizarre.

And that’s what separates Wilson from the rest—she’s taken the path less travelled, or at least the one filled with the most ruts and roving bands of marauders, and she’s made one hell of a ride of it, thus far. To paraphrase another famous musician, Staci Layne Wilson did it her way. Ravenous Monster caught up with Wilson to talk about her two horror features, what makes her geek out, and what’s coming next. Read on, Horror Fans….

RavMon: You’ve recently wrapped Good Family Times, a feature that you’ve described as a supernatural thriller. How did production go and what can we look forward to?

Staci Layne Wilson: The production went great! Blanc-Biehn’s shoot model for features is five 12-hour days, and we pulled it off. Thanks in part to the fact it is a home-invasion thriller and so we had one main location, and also due to the wonderful crew and a game cast who knows how to pull together and make it work. The story follows a reclusive young woman, Beatrice (Arielle Brachfeld), whose tranquil life is shattered when her home is broken into and she’s taken hostage while they search for a treasure she’s hiding. Little do they know, she’s also hiding a secret weapon: her sentient mannequins.

SLW: While Good Family Times is dark and intense, Fetish Factory is a wild, good-natured, fun romp. Fetish Factory is a throwback to the silly exploitation genre flicks of the early 1970s. Horror on Snape Island (1972) is a favorite and while the story is nothing like mine, the live-action “Scooby Doo” vibe was very much a touchstone. Fetish Factory is about a troupe of burlesque girls (Carrie Keagan, Jennifer Blanc, Tristan Risk) who find their audience has turned into bloodthirsty zombies and they must use all their feminine wiles to fight them off and survive the night.

RavMon: Fetish Factory is clearly a very different beast than Good Family Times. Were there any issues transitioning between the two productions?

SLW: No, we shot them almost a year apart. Besides, I’m a fulltime freelance writer so I’m used to switching between everything from home décor blogs, to art-house movie reviews, to fiction on any given day. I’m a master multitasker!

RavMon: You’re also crossing over from covering the horror genre, both online and in print, to being a creator whose work inevitably gets covered by people like me. Did your background writing about other people’s projects affect your approach to your own work? I can imagine there being some unique insights…of course, I can also imagine starting out your filmmaking career sort of pre-disillusioned.

SLW: I wouldn’t say disillusioned; I grew up in the entertainment world so I already knew a lot about it going in. I think having a lot of knowledge from the aspect of an observer and reporter actually enhances my experience as a creator. Having said that, there is always an aspect of “movie magic” to the whole thing. It’s such a thrill to hear the words that I wrote, spoken and interpreted by actors; and to see my vision brought to life by the talented DPs I’ve had the pleasure of working with, and seeing what they have to contribute to the art. Watching a project from script to screen is a true joy.

RavMon: Who are the filmmakers that inspire and inform your own work?

SLW: Even though I am most comfortable writing and directing horror, sci-fi, and high-concept thrillers, the filmmakers I truly revere and envy are Gaspar Noe, Jim Jarmush, Lars Von Trier and Sally Potter (to name a few). I’m also a huge fan of 1960s European New Wave; as far as I’m concerned, Godard’s last name should be shorted to just the first three letters.

RavMon: Actor Michael Biehn (The Terminator, Aliens) is involved with some of your projects as a producer. How did that relationship come to be?

SLW: Yes, I am so grateful! It’s actually his wife, Jennifer Blanc, who took notice of me. I met them through my profession as a film journalist. I’d only directed a couple of short films at the time, but Jen asked to see them. I figured she was just curious, and I sent her the links. I didn’t hear anything back for a while… completely forgot about it until one day, she and her producing partner Lony Ruhmann got in touch with me with their idea for Fetish Factory. The rest is history! I wrote and directed that, then Good Family Times, and I also wrote a script specifically for Michael Biehn, called Fembot. And one more, a thriller called The Lincoln, which begins production in September.

SLW: It’s not just horror for me, but the thing I do love about the genre is all the wiggle-room within it. The Exorcist is every bit as much a horror movie as Friday the 13th. Frankenstein is a horror movie, and so is The Silence of the Lambs. I love that!

RavMon: Are there rewards that a project like 3AM in Hollywood provides you artistically that genre projects don’t?

SLW: Actually, having to set one’s story-telling in the “real world” is a lot harder. Even though I am one to try and make sense of things (I’m very interested in psychology and true crime, so I always take into account why the characters do what they do, and how they get away with it), when you’re writing a zombie comedy it’s much easier to just blame inconsistencies on the supernatural! 3AM in Hollywood is the first feature I wrote that a) was not for Blanc-Biehn, and b) no one got murdered, there were no zombies, ghosts, slashers, or aliens! It’s a really cool script, based on the director Miles Kelley’s idea – it’s a romantic dramedy that takes place in the course of one wild night in Hollywood, and stars Paige Herschell and Giovanni Watson. It’s the first of many films for June Street Productions.

RavMon: What were the stories that inspired a young Staci Layne Wilson to travel down the perilous path toward becoming a storyteller yourself?

SLW: Well, as I mentioned – my mom is a writer. In addition to editing Confidential and other gossip mags, she also wrote several novels when I was growing up. She was (and is) a voracious reader, so I’d raid her bookshelves regularly. When I was (probably too) young, I read the works of William Peter Blatty, Erica Jong, William Goldman, John Jakes, Tom Wolfe, Toni Morrison, Thomas Harris, and the like.

RavMon: As a director, what do you consider your strengths to be? On the spectrum of directorial approaches, do you lean more toward coaxing the desired performances from your cast or do you focus on composing aesthetically and visually interesting cinema?

SLW: I feel that my strength is casting actors who I already know are right for the roles and therefore won’t need a lot of direction. They already ‘are’ these characters. Having said that, since I’ve only (to date) directed features based on scripts I have written, sometimes I will have suggestions on where the inflection on certain words should be. As far as visuals go, I like to be as arty as possible given the constraints of low-budget filmmaking.

RavMon: What’s your least favorite part of the process?

SLW: Post-production! I love getting in there with the editor and that part of crafting it – but unlike the short films I did and had total control over the schedule, I now have to wait at the producers’ pace on the features. I’m so eager to show everyone the movies, but the production companies I’m working for have several movies in the queue, not just mine.

RavMon: Are there any movies that truly frightened you and if so, why?

SLW: I would not say frightened as I don’t scare easily, but definitely affected or disturbed. Kubrick’s The Shining is one that sticks with me. So is Zulawski’s Possession. Many of Argento’s earlier films.

RavMon: As a predominately horror filmmaker, what do you want your legacy to be in this genre?

SLW: I just want people to enjoy my movies. I have no lofty aspirations of legacy.

RavMon: Fetish Factory will be hitting the festival circuit soon. What’s the postproduction itinerary looking like for Good Family Times?

SLW: I’m just a hired hand! And my bit of writing and directing is done. I wish I had a concrete answer, but we will be cutting a trailer for Good Family Times together very soon.

RavMon: What’s next for you and where can Ravenous Monster readers find you?

SLW: I’m working on a variety of film and TV projects, which are in their infancy. The next movie you will see for sure, and soon, is one I produced called The Fiancé – it’s a very unique Bigfoot meets crime-thriller-adventure, directed by Mark Michaels. I’m also very excited to be collaborating with one of my favorite human beings on earth, Darren Gordon Smith (Repo! The Genetic Opera) on a book. It’s an anthology with a “sex, death, and rock ‘n roll” theme, and it should be on Kindle within the next month or so. I’m very proud of it, and can’t wait for everyone to read it.