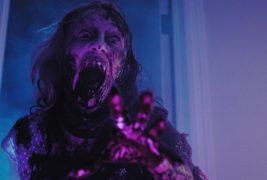 Low-budget horror films are kind of a category unto themselves. When it comes to a critique, you’re somewhat honor bound to review them on their terms, taking into account the penny-pinching science that goes into special effects, scoring and, of course, casting.

That’s why when I saw the crew lined up for The Good Things Devils Do, my hopes skyrocketed. Bill Oberst Jr. (Circus of the Dead, 3 From Hell), Kane Hodder (you know him best as Jason) and Linnea Quigley (horror’s magnificent scream queen) comprise the A-list stars of B-movies.

And as the opening credits unfurled — a slick montage of animated faces smiling and grimacing through flames — my hopes stayed right up there in the stratosphere.

Ahhh, had only we soared ever higher (cue Carry on My Wayward Sun; royalties to Kansas).

We get off to a decent enough start. Oberst plays Richard, a second-rate crook who wants to retire but is told he must carry out one more assignment, retrieving money owed a mobster. Richard’s daughter, Mouse (Mary Katherine O’Donnell), will be along for the ride, but so too — much to Richard’s chagrin — will be Percy (Hodder), a sick, sadistic, psychopath who’s in the game for blood, not bucks.

In fact, we’re treated to a Percy vignette in which he uses a shotgun to obliterate one poor woman’s head and then, coldly and callously, her whimpering young daughter. Percy and personality do NOT go hand in hand.

So, here we are: Papa, daughter and Percy head off to retrieve some money from a suburban family on Halloween, amidst scads of costumed young’uns. Not to be undone, our criminal trio also dons costumes, Percy the most handsomely, swathed in skull and bones attire.

Now about that family. The head of the household is Melvin (David Rucker III), who lords over wife Louise (Quigley) and stepdaughter Caroline (Kelley Wilson Robinson). Caroline is a stay-at-home would-be hipster tease, though she’s nearly 40. Neither mom nor daughter care much for Melvin’s hobby, which is collecting specimens for his Museum of the Macabre, most of which collect dust in his basement. But his latest acquisition is a box containing the remains of Masquerade, an ancient vampire said to have hell as a birthplace.

When Louise takes a gander at Masquerade, she unwittingly pulls out a stake. In one of the movie’s funnier scenes, she yells upstairs to Melvin, telling him he bought a “chair leg.” But as we soon see, Masquerade is about to visit, and Louise is her first victim.

Things get hairy from this point forward. Melvin’s home, of course, is where the crooks are supposed to get their money, but they’re soon working hand in hand with Melvin in battling Masquerade. Sadly, seeing as how he’s the best and creepiest figure in the movie, Percy is the first to go. But we’re also treated to the demise of a young female trick-or-treater, whose brother then, rather comically, asks to borrow a phone so “I can call my mom and tell her my sister’s dead.”

It’s this blend of camp, crime and carnage that is the movie’s undoing. I’m not quite sure what novice director/writer Jess Norvisgaard had in mind, but I doubt “hodgepodge” was at the top of his list. Perhaps in the hands of a more experienced helmsman we’d have had a more unified script. As it is, we’re left with a film that doesn’t quite know what it wants to be, not to mention one filled with enough plot holes to fill the Albert Hall (cue A Day in the Life; royalties to The Beatles).

You’re also left with several head-scratching moments that simply defy reality, even in a flick like this. I mean, Richard is accosted by Masquerade, then takes a knife deep in the gut followed later by another knife plunged so far into one eye it had to curdle his cerebellum. Does he die? No. Is he incapacitated? Barely.

In an earlier scene, after Masquerade takes a chomp on Louise, Melvin gets her into bed where she’s spurting more blood than a Saudi oil derrick spurts oil. Does anyone think to call 911? Again, no.

We do get some decent performances here, particularly O’Donnell’s take as Mouse. Oberst is solid and, as mentioned, Hodder’s menacing portrayal of Percy couldn’t have been better. Quigley gets too little screen time for my money. And it would be a crime to overlook Veronika Stoykova as Masquerade. The makeup crew did excellent work with her, and though her lines are limited, Stoykova makes the most of her horrific scenes.

It’s a shame then that The Good Things Devils Do doesn’t live up to its potential. In effect, it’s a case of Norvisgaard saying, “Die by my hand” (cue Creeping Death; royalties to Metallica). He had the means here to construct a classic, but what he got was an ultimately disappointing mishmash. Hopefully, he’ll learn soon that the real devil is in the details. 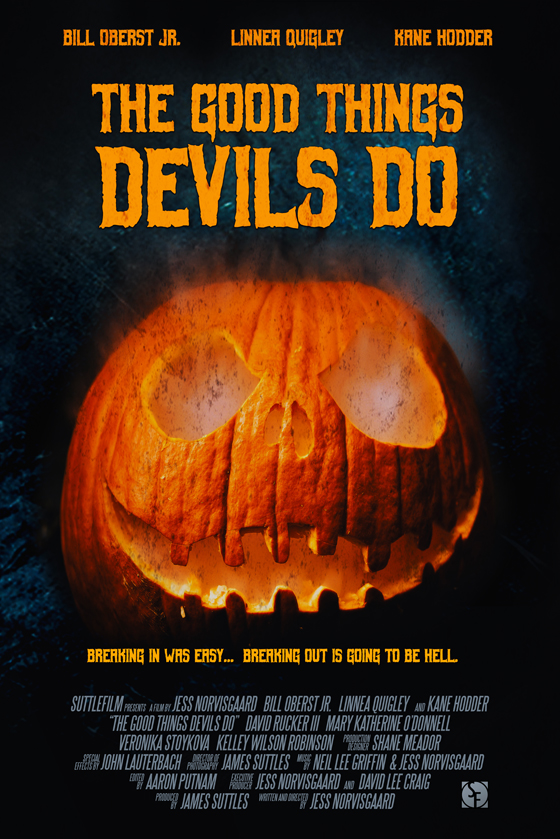