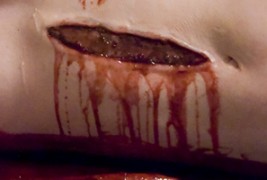 Gut is a 2012 release from director/writer Elias, available for download off iTunes, Amazon and several other download networks.  This low-budget indie film takes a quiet, character-driven approach to a tired storyline, and despite some flaws in execution, it manages to raise some unsettling questions.

Officially, the plot is quite simple:  A man, unhappy and detached from his boring adult life, is invited by his friend to watch something he’ll have to see to believe.  Unsurprisingly, the film in question is a snuff film – apparently obtained online through some sort of underground file sharing service – and it begins to haunt both viewers, who find the lines between voyeurism, fantasy and reality start to blur together.

Where the film becomes truly interesting, however, is not in its plot – which is admittedly well-worn – but in its characterization and the depth of theme that shines through from careful filmmaking.

After a disorienting violent opening scene, we meet Tom, the would-be hero of the film.  A husband, father and office-working drone, Tom is a quiet, disaffected everyman whose life has been slowly reduced to tedium.  By way of contrast, we’re introduced to his office mate and long-time friend Dan, a late-blooming bachelor who is both goofy and awkward, a horror movie nerd who seems caught in the infantile web of perma-adolescence.

And, rather than introduce these archetypes as incidentals to the plot, Gut then takes its time to explore these characters, their relationship and the way they fit into their respective worlds.  Although the events of the ensuing plot are simultaneously predictable and maddeningly vague, the questions raised by the tale remain intriguing.

In terms of the film itself, a few things bear mentioning.  Gut feels like the effort of a low-budget indie director.  This isn’t a bad thing, but simply a fact: At no time watching this movie will you confuse it for a high-gloss Hollywood production.  Rather than struggle against it, though, Elias smartly uses it to his advantage.

The actors feel like real people; they’re not stunningly beautiful or achingly witty, and their troubles are more realistic and familiar precisely because they’re exactly like us.  The special effects are used sparsely but effectively, and the soundtrack serves to anchor the viewer in scenes of interiority and subtle emotional impact.

A critique of Gut also cannot avoid mentioning the sex.  If, for some reason, sex offends you, this is not the movie to watch.  Eroticism pervades every aspect of the film, as if taunting the viewer:  “Don’t be too critical of the men watching the snuff film,” the movie seems to say.  “You’re doing it, too.”

I wrote not long ago about the video game Catherine, and Gut touches on the same – to pardon the pun – visceral material.  It’s a story about masculinity and manhood, about whether it’s possible to grow up without losing yourself entirely.  For today’s horror fans, this question certainly deserves to be asked, even if the answers are troubling, complicated and unclear – very much like the final moments of this film. 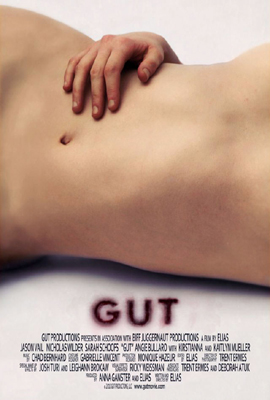