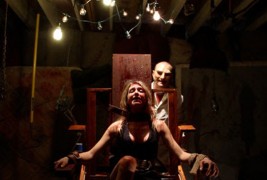 Some films merely gross you out. Others call “Playback!” every time the lights go out. Then there are those films that make you rethink your agnosticism. Namely, there are a select few flicks that are so twisted, so damned diabolical that they make you seriously consider going back to confession for the first time in decades. The House With 100 Eyes is one such film.

Well, if you must insist on seeing The House With 100 Eyes, consider this: the Karla Homolka/ Paul Bernardo tapes were probably cheerier. And that’s no coincidence either, for directors Jay Lee (sick bastard) and Jim Roof (an even sicker bastard for writing the whole thing) set out to make a found footage snuff film, and by golly they did it. See kids; nightmares can come true!

In sum, The House With 100 Eyes details the exploits of Ed (played by Roof himself) and Susan (played by Shannon Malone), the owners of Studio Red and a home so wired for sound and images that it’s an obvious digital age fable about modern humanity’s need to constantly hear its own voice. (One quick aside: the film’s opening titles suggest that the action takes place around 2000, which is impossible given the fashion and the amount of cell phones shown.) Given Ed’s Chicagoland accent and Susan’s blonde and milquetoast exterior, one would expect that Studio Red would specialize in family friendly comedies or the occasional crime drama. Nope—these two Los Angeles transplants are “artists” running after the historic. Therefore, their latest Studio Red production is slated to be the world’s first triple homicide captured on film. As Ed himself explains, it’s all about “taking snuff to a whole new level.” Besides body count, this means DVD bonus features, director commentary, and other goodies. Ed and Susan are out to make snuff slick and sicker at the same time.

This is where things go into hyper-drive. While Jamie and Clutch bone in the shower, Ed takes Crystal to the “romper room” and begins filming her evisceration. It starts with a hammer, a nail, and a shot to the bone before ending with autosarcophagy. Or, in layman’s terms, Ed cuts open Crystal’s belly, pulls out a string of fat, and feeds it to the victim he affectionately calls “Piggy.”

As if this weren’t enough, Ed and Susan torture Crystal in front of a live audience member—a brain-dead multiple amputee gimp named Maddie (played by Lauren Lakis). If she could clap, I’m sure Maddie would’ve appreciated all of the comedy. 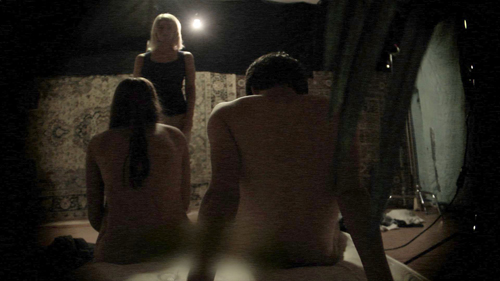 After Crystal’s mutilation, the excrement starts to really touch the windmill as Clutch goes looking for some more beer and some pot. Susan catches him in the act, and before long, she’s sticking needles in his stomach and crotch. Clutch doesn’t like this type of treatment, so he convulses and spews blood from his mouth to show his displeasure. Ed’s not happy either, for now his film is ruined. He solves this problem by finally admitting to Susan, his wife, that he’s been making solo snuff films with various women for years.

Ed now has two pissed off women under his soundproof roof. The first one, Jamie, fights back by beating the pornographer senseless with a camera’s tripod. Then, Susan shoots up her favorite philanderer with a paralyzing agent, which in turn makes Ed unable to stop Jamie from shooting him in the leg, the balls, and, finally, the noggin. Exit Ed.

Now we’ve come to the final showdown: Susan versus the Final Girl. Who wins? Who knows? The House With 100 Eyes ends with a question mark that I won’t (and can’t) answer. Suffice it to say that, like John Carpenter’s Halloween, The House With 100 Eyes taps into unattached breathing in order to make the audience even more uncomfortable.

The House With 100 Eyes is not only a hard film to watch, but it’s an even harder film to digest. After all, it’s so obviously clear that the filmmakers have turned the metaphorical camera back on us, as we, the voyeurs chasing after the grisly misfortunes of others for entertainment, watch as another pair of filmmakers do the exact same thing. Furthermore, The House of 100 Eyes really drives home the link between filmed sex acts and filmed and simulated murder acts, especially when we catch Ed spanking it to one of his films. It’s an Ouroboros of depravity, you might say, even for nominally stern stomachs. 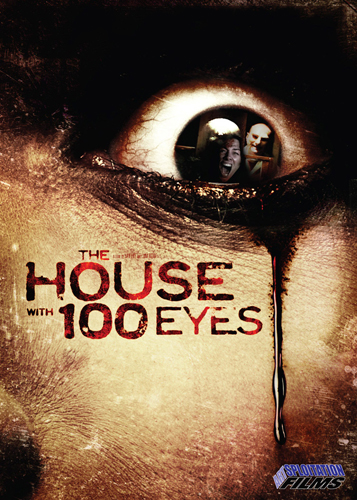 The House With 100 Eyes will be available on DVD starting on June 16th.

One thought on “The House With 100 Eyes Movie Review”