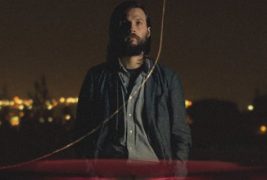 Take the pill and the drink the Kool-Aid. Don’t worry about the ATF agents on the other side of the compound. We have to leave this earth if we want to meet the mothership. But, before we go, let’s creepy crawl some pigs.

This is cultspeak—a second language for most with-it Americans. For the sane majority, it’s a criminal argot imbued with the deadly fanaticism of true belief. Fear of cults has gone down a bit, thanks in part to the sheer ridiculousness of the Satanic panic of the 1980s. However, memories remain. More importantly, for horror filmmakers, cults now have reserved seating at the genre dinner table next to vampires, werewolves, ghosts, and demons.

After originally premiering at the SXSW festival in 2015, The Invitation is now currently enjoying a very limited run throughout the United States. Like its debut showing, Karyn Kusama’s film is pretty much consigned to the craft beer and gastropub circuit that crisscrosses a select few American metropolises. I personally saw the film in a tiny, artsy-fartsy theatre in Cambridge, Massachusetts. The crowd around me were squads recently demobilized from the selvedge denim army. Surprisingly, halfway through the film, I recognized that they were all bored stiff.

Sure, The Invitation is a slow burn. Maybe even slower. The film is also incredibly claustrophobic, with scenes making concentric circles out of a single house in the hills above Los Angeles. The plot is likewise tight and the dialogue is often repetitive. (The film should be subtitled “I’m sorry” based purely upon how many times that phrase is repeated.) The Invitation concerns Will (played by Logan Marshall-Green), a bearded and broody type who has yet to come to terms with the death of his son. Knowing that her ex-husband is still struggling to cope with his grief after several years, ex-wife Eden (played by Tammy Blanchard) and her new husband David (played by Michiel Huisman) invite Will and his girlfriend Kira (played by Emayatzy Corinealdi) to a party. Eden and David have recently returned to L.A. from a prolonged stay in Mexico. As it so happens, the house Eden and David live in is the same house that once belonged to Will, Eden, and their deceased child. This house is also the location of the impromptu party.

Since get-over-your-death-troubles parties are never fun, The Invitation has a built-in tension that never breaks. In fact, from the opening sequence (which sees Will putting a coyote out of its misery with a tire iron) to the film’s predictable reveal, The Invitation forces the audience to experience the same hyper sensitivity that afflicts the trauma-haunted Will. This makes for tough movie-going, especially since the film’s plot moves at a glacial pace. 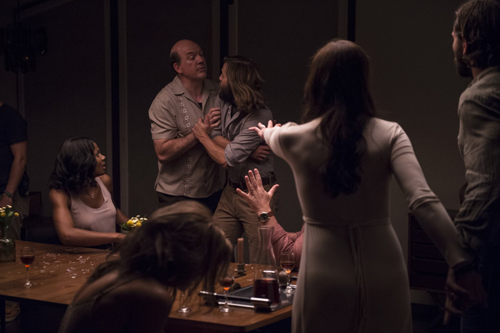 For the majority of its runtime, The Invitation presents a dinner party populated by Hollywood weirdos. Although none of the characters are actors, they all conform to typecasting. They are as follows: the fun-loving party gal with the slacker boyfriend (played by Michelle Krusiec), the fat goofball (played by Jay Larson), the pixie dream girl who happens to be a nympho (played by Lindsay Burge), the happy gay couple (Mike Doyle and Jordi Vilasuso), the scholastic “normie” (played by Marieh Delfino) and the aforementioned slacker himself (played by Karl Yune). In order to bring out their quirks, the guests play various parlor games, get into squabbles about this and that, and generally blather on and on about the usual crud. So far, so bourgeoise. However, since Kusama attaches the viewer so closely to Will, the party seems off from the start. The entire house has a menacing vibe, and not just because a dead boy used to live there. When Will finds phenobarbital in David’s nightstand, things start to feel icky. When Pruitt (played by the constant heavy John Carroll Lynch), a former jailbird who cops to accidentally killing his wife during a drunken rage, shows up and stands around like a sociopathic sentinel, things really start to feel gloomy.

The whole dam breaks when Eden and David decide to show the group a pitch video from The Invitation, a New Age cult based in Sonora, Mexico. The cult’s leader (played by Toby Huss) is the latest version of Marshall Applewhite, the bug-eyed ghoul who led the Heaven’s Gate cult to mass suicide in 1997. Indeed, The Invitation are big fans of self-inflicted death and their propaganda proves it. In what has to be the biggest downer in partydom, Eden and David’s quick video presentation ends with an assisted suicide caught on tape.

This horrifies most of the guests, but within no time they’re back to their frivolity. Only Pruitt and Will maintain hard edges, but they do so for different reasons. Pruitt is at the party to make sure everything goes according to plan, while Will plays the suspicious detective who hits upon an unspeakable truth. After seeing David hang a red lantern in the backyard, Will decides to act by smashing wine glasses that had been raised in a toast. The wine is poisoned of course, for The Invitation have decided that tonight is a good night to die.

What follows is a brief, but effective game of cat-and-mouse played between killers and potential victims. There is some blood, but not much. The Invitation is a psychological spook show and the film’s final minutes only serve to underscore this fact. That said, the film’s last image is excessive and reminds its audience that it is watching a horror film and not playing a fly-on-the-wall peeper. Other moments of clarity, such as the film’s obvious debt to the Manson family murders, likewise dampen the intended shock value. Still, this quiet horror film succeeds as a chamber drama gone to hell. While not a nail-biter, The Invitation is the type of movie that makes people sweaty with anticipation. It’s horror thrown on top of social awkwardness, which ultimately makes the entire experience of watching The Invitation an exhausting, but rewarding trial. 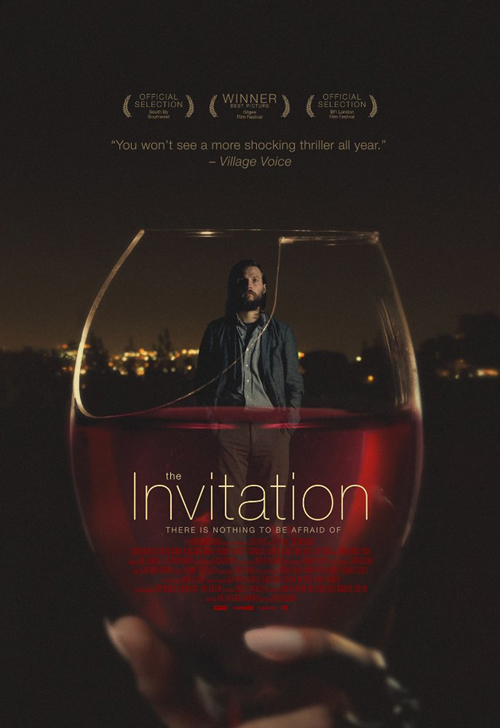 One thought on “The Invitation Movie Review”