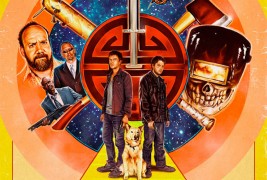 A decade after Bubba Ho-Tep Don Coscarelli is back with another feature based on a cult author’s work that masterfully blends humor and horror.

John Dies at the End follows our hero Dave Wong and his buddy John as they are forced to fight off an inter-dimensional invasion.  The invaders are using a new drug known as soy sauce to take over the physical beings of those who take it, allowing them to be controlled by the invaders.  The soy sauce affects everyone differently, so that no encounter with a possessed person is ever the same.

Coscarelli’s film captures the spirit of David Wong’s book incredibly well, and he has great success mixing the horror and comedy elements of the story.  There are moments in the film that are both genuinely creepy and laugh-out-loud funny.  Coscarelli infuses the film with a trippy visual flair that adds energy to even some simpler scenes of dialogue.  It also creates a sense that at no point is anyone truly safe.

The cast is incredibly strong overall with relative new comers Chase Williamson and Rob Mayes giving great grounded performances to balance the absolute chaos that moves around them.  Paul Giamatti plays a newspaper reporter who interviews Dave, and this is the narrative device used to move the story forward.  While this creates a choppy sense of pace at times, it also allows Coscarelli (who also wrote the screenplay) to stream line Wong’s novel.  For diehard fans of the book this means great chunks of the novel are just missing.  There is some voice over work by Chase Williamson as Dave, however most of the humorous elements have been cut, and the voice over is used almost exclusively to move the plot forward.

In my review of the book, originally published here, I stated that at times the book comes to a grinding halt, and at 100 minutes these slower elements are nowhere to be found in the movie.  But many action set pieces are also absent, including my favorite one.  However, in keeping with the spirit of the book, Coscarelli still includes the existential humor that helped to define Wong’s book.

John Dies at the End is a trippy, creepy existential comedy.  Some fans of the book, will probably be let down by some of the alterations made to make the story more filmable, especially for a smaller budget feature.  Despite this, the movie is wholly enjoyable to those of us with odder sensibilities and I can say I enjoyed every frame of Don Coscarelli’s newest film with a stupid grin on my face.  As with most truly original works John Dies at the End is in limited theatrical release, but available from most streaming services.

Imagine Scooby Doo with large amounts of profanity, blatant drug use, violence and a little bit of nookie.  This is the best way I can surmise David Wong’s John Dies at the End.  Despite a few areas where the momentum comes to a grinding halt, I cannot recommend this book enough to anyone looking for either original horror or humor.

The plot revolves around David and his best friend John as reluctant investigators of the paranormal.  The story is told in conversational form as John explains his story to Arnie a reporter in, ‘They China Food!’ a restaurant owned by Czech brothers who have not remodeled since the Mexican restaurant that had inhabited the building closed.

John Dies at the End is strongest in trippy action sequences with David and John fighting all sorts of unholy hell.  They are joined early on by a dog named Mollie with many humanistic characters.  My favorite sequence is an action movie parody depicting John bashing demonic creatures with a chair and shouting chair-related puns as each creature goes down.

If you are intrigued by this, I am sure you will be very amused with this tale.  If your reaction to this is, ‘Really?  What the fuck?!’ then John Dies at the End is not for you.