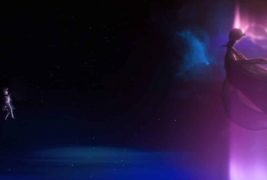 Hot in pursuit of the Book of Names, Tic realizes he may have a family connection to it and goes to St. Louis to track it down. Meanwhile, Aunt Hippolyta begins investigating what happened to Uncle George. Both come together at an enigmatic observatory, laying the groundwork for the trippiest episode of the series thus far.

“I Am,” directed by Charlotte Sieling, is a frustrating episode. It’s not that it’s bad per se. Indeed, some of the imagery is very striking, and the interdimensional journey taken by Aunt Hippolyta is very artfully done—and totally lacking in horror. Are we being set up for a dark reveal? If so, Sieling gives us no indication of it, part of Lovecraft Country’s frustrating tendency to detour from its storyline in favor of pursuing other, more tangential subplots.

Lovecraft’s work doesn’t entirely lack a sense of wonder, but Lovecraftian wonder is always couched in alienness, like a coral reef at night. For all its art and high production values, “I Am” fails to provide the mixture of Lovecraftian horror and meditation on race that has thus far made the series stand out. With only three episodes left in the season, let’s hope Misha Green and her team get the story back on track.