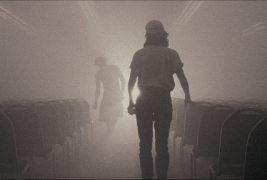 The receptionist in a police precinct lobby blindly goes about his work when an obviously injured woman enters. She stares at him for several minutes; he does not look up. She haltingly, agonizingly walks toward a vending machine, buys a can of soda, drinks it.

She eases her way back toward the door, looks again at the receptionist.

“Is this how you want to live your life? Is this what you want?” she asks.

The receptionist, without looking up, dismissively raises a hand, pauses, finally looks at the woman and says, “Yes.”

She repeats herself, this time more forcefully as the sound echoes and intensifies.

Boom, cut to the title sequence.

So goes the opening scene in Luz, the feature-length (barely) directorial debut of Tilman Singer, a German filmmaker/writer whose work here earned considerable buzz on the festival circuit.

That opening is so tedious, so threadbare as to make one wonder if this is about to be a giant waste of time. Yet, the grainy footage (16mm) is so moody it’s almost hypnotic. That, viewers soon discover, is Singer’s magic.

Luz is the title character, a cab driver who wears a baseball cap backwards and whose personality seems as subdued as that of a snail. But her backstory, we’ll soon learn, is anything but mundane.

After that opening scene, Tilman shifts his focus to a bar where an attractive, flirtatious woman named Nora strikes up a conversation with an intense man — Dr. Rossini, a psychologist — who slowly warms to a story that makes little sense initially. She talks of meeting Luz in school in Chile and of a ritual performed that summoned a demon. That demon, she says, wants Luz back.

Nora (Julia Riedler) then lures the doctor to a restroom where after what appears to be a sex act, she gives him a kiss, imparting a glowing menace into his horrified, gaping mouth.

Later, we’re taken back to the police station, where Dr. Rossini (Jan Bluthardt) is about to place Luz under hypnosis. Also present are a couple of detectives, one of whom is in a sound booth recording the interrogation. It’s now clear Luz wrecked her cab, injuring herself and evidently killing Nora. The two had met again by chance in Germany.

Under hypnosis, Luz begins to relive those events, miming her driving and encounters with others. The miming soon becomes a reality that threatens all of those in the room.

Luz is an amazing if at times confusing bit of work from Tilman, who eschews convention at every turn. The movie, just 70 minutes in length and subtitled, plays out in parallel scenes, with mismatched time sequences and dialogue — spoken at times in English, German and Spanish —  that requires work to follow.  The title character, magnificently played by Luana Velis, builds from misunderstood to misanthrope. She occasionally utters a profane version of the Lord’s Prayer for reasons unknown … until known.

As good as Velis and her castmates are, this is all about Tilman, who appears to be one part Cronenburg, one part Argento, one part Lynch but who is wholly an original. His spartan sets, hazy footage and, most especially, atmospheric synth sounds give this a feel unlike any other.

This won’t be everyone’s cup of tea. As horror movies go, this isn’t scary or easily understood. Perhaps the best word to describe it is unnerving. Luz is a bit like watching paint peel, but it’s mesmerizing as those falling flakes give way to something unexpected. 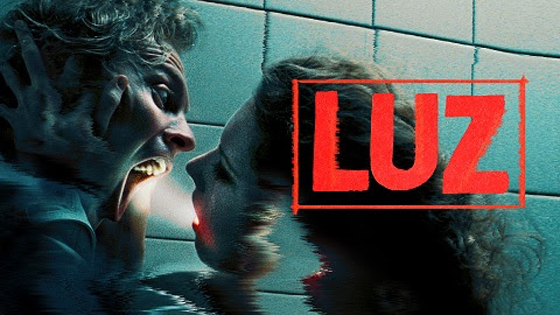