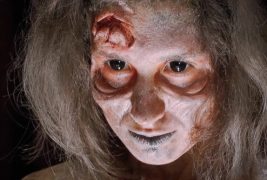 Why on Earth would anybody mess around with a Ouija board? Judging from the awful results of using one seen in dozens of movies and TV shows over the years, you’d have to be a few McNuggets shy of a Happy Meal to try contacting the spirits by means of Ouija. Seriously, can you name me one example of a happy result from using a witchboard?

Now we can add one more movie to the long list of Ouija-oriented horror flicks. Directed by John R. Walker, Ouijageist is an extremely low budget film from Britain detailing the latest wretched result of playing around with undead forces. No doubt this one is heavily influenced by 2014’s Ouija, the last well-known film on this subject. Does it offer anything new in this highly specialized subgenre?

Not even for a minute. This is by all standards a predictable and unoriginal film that virtually embodies the word “average.” Now there are a few things this little escapade has going for it, but these little touches aren’t enough to elevate it to the “must see” category. Putting together a film from scratch is far from easy and the difficulties are not to be lightly dismissed, but there’s really an avalanche of these direct-to-streaming horrors and you’ve got to do something different or off the wall to break through. Ouijageist simply does not do this.

The basic plot of almost all “Ouija” movies can be summed up simply in one sentence: people (almost always young people) find an old Ouija board, use it and suffer from terrible things. So it is here. Of all the movies with this plot, 1986’s Witchboard did the best job of running with the concept.

Ouijageist does have an intriguing beginning sequence, with a man running through a remote forest. He’s running from something or someone, but what, we can’t clearly see. We find out that he is in the Swiss Alps. He stumbles into a lonely farmhouse and sees a dead body that he recognizes. He also finds an old wooden case, which is making some appalling mumbles and whispers that sound rather like the intro to SLAYER’s “Hell Awaits.” We’ll be hearing a lot more of that before this is over. While this is going on, the soundtrack is going full blast with some really cool analog synth music, like something John Carpenter or Fabio Frizzi might cook up. To tell the truth, this retro synth soundtrack is one of the movie’s strongest assets.

The man picks up the case and heads off into the forest. Finally, he buries the case beneath branches and debris and then lays back and laughs maniacally as we see the shadow of a pursuing figure….

This is one hell of a way to kick off the movie, but it may also be the strongest part of the film. Well, Ouijageist is certainly not the only movie to start with a bang and then peter out…

The scene switches to contemporary Britain.  Young single mother India Harper (Lois Wilkinson) has just moved into a beautiful new flat with her young baby Emily in tow. It’s established right away that India is struggling to make ends meet, so how she is able to afford the spacious two-level apartment with a large garden is unknown…maybe another mystery of the supernatural? I have to say that Lois Wilkinson makes for a slightly different horror heroine. Although not ugly, she is by no means the typical knockout starlet and this is one of the aspects of Ouijageist that I like. The role is somewhat cliched, but she gives it her best and helps to make the movie watchable.

While exploring the lush garden around the apartment, India, her mum Karen and girlfriend Becca find a wooden box buried in the debris. It’s an old Ouija board, also known as a witchboard. And it’s also the very same board that the man in the early scenes was burying in Switzerland. The apartment landlord Laurie (Roger Shepherd) doesn’t know what to make of it but says it’s a great antique.

It doesn’t take long for India and Becca to start playing around with the Ouija board. And true to all other Ouija-oriented films, horrible things start to happen. Becca takes a tumble down the stairs, baby Emily almost drowns in the bathtub while the door to the bathroom mysteriously locks itself, and finally the handyman hired to clean the roof gutters falls and suffers a bloody death. This last scene, involving an evil garden hose and a ladder of very modest height, comes across as being pretty ridiculous.

Under questioning, Laurie reveals that the apartment’s previous tenants have also suffered from terrible experiences. The flat has a reputation as being “cursed.” India is slow to believe it, but when she has a lunch with her drug-dealing ex-boyfriend and Emily’s father Paul, there’s no longer any doubt. In another goofy scene, Paul drinks scalding hot coffee, screams and then roars at India while becoming a kind of zombie before running out the door. All this in the middle of a cafe, where the other patrons are somewhat put off, to say the least.

The accumulation of weird happenings leads India and her friends to seek the advice of the local bishop, who turns out to be a garrulous old chap who spends quite a bit of his time talking about the Poltergeist movies. The whole scene with this rather fatuous man of the cloth results in very little concrete strategy, although he does definitely seem to endorse the idea of demons.

Laurie and India try to get answers from the witchboard itself in a séance, but nothing happens. “The spirits aren’t going to give any answers tonight,” sighs Laurie. Which of course means that action is about to pick up, which it does the minute India is left alone. She suddenly gets assaulted and chased by a series of zombies, who are all previous victims of the Ouija board. The zombie makeup is quite acceptable for a low budget film, but there is something lacking about the flat way the zombie attacks are filmed.

The last ten or 15 minutes bring us a delirious rush of action as India is literally chased across town by the spirits of the dead. I know it’s a quiet suburban neighborhood, but you’d think at some point she would run across a cop, a passerby or a drunk. Everything culminates in a final confrontation at the graveyard, where India gets to summon up her inner “Ash” and go all Bruce Campbell on the ghouls.

Ouijageist emerges as a pretty insignificant film, almost hardly worthy of notice. It doesn’t reach the heights of badness where it crosses the threshold to being really entertaining, although the scene in the coffee shop and the one with the garden hose come close. There are small victories like Lois Wilkinson’s performance as India, the appealing synth soundtrack and the decent zombie make-up. But the whole affair is so predictable, including the “wicked” finish, that you have the feeling that the entire movie was written and directed by an algorithm.

I’m guessing the folks that got together and shot this had an absolute blast. It’s unfortunate that viewers won’t share that feeling. You don’t need the help of spirits to figure out Ouijageist is just another horror movie among many in the digital age. 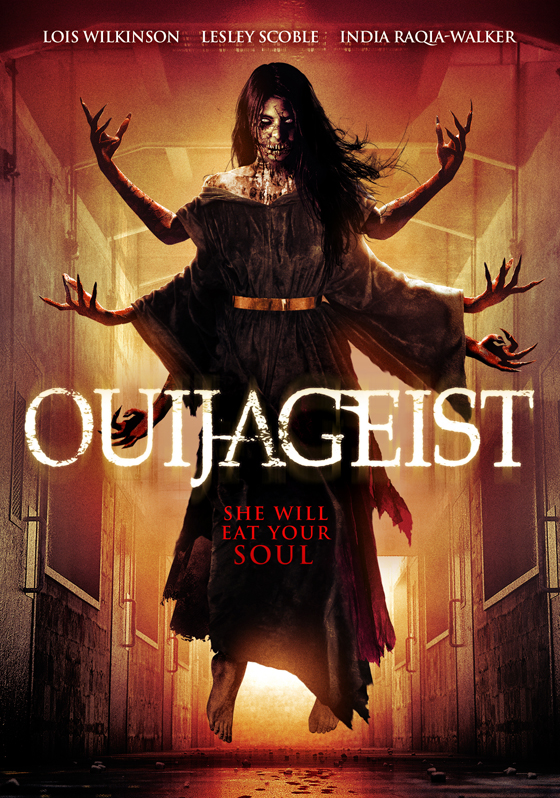