I’m just going to cut to the chase and state that The Retaliators is yet another film where the trailer for it is pretty awesome, but the movie winds up being just average. Despite being marketed as the big “rock n’ roll movie” of the year, The Retaliators really winds up being a mixed bag of confusion and frustration set to an okay soundtrack for the hour and thirty-seven-minute runtime. Cameos from members of bands such as Papa Roach and Five Finger Death Punch might be fun for fans of these bands to see, but they don’t really help make the movie any better or worse. Oh yeah, there’s also a cameo by Tommy Lee of Motley Crue, but blink and you’ll miss it.

The opening scene is pretty routine. Two girls in a van decide to take a drive on a route that’s unmarked and unknown. Naturally, they get a popped tire, and all hell breaks loose. OH NO!!

Now, let me stop here and tell you that The Retaliators is basically three plots wrapped up into one, which kind of works as the film moves forward, but it also makes the story go all over the place and become annoyingly sloppy.

Moving along from the popped tire and the two girls in dire trouble—something happens to them at which point we flashback to a couple of years ago when we meet our main character/protagonist, mild-mannered Bishop (Michael Lombardi). He happens to be a man of the cloth and a father of two daughters, Sarah (Katie Kelley) and Rebecca (Abbie Hafer). They all live an easy-going lifestyle, free from violence, confrontation or any other such ugliness that exists in real life. That is until the older daughter asks her dad if she can go to a party and unfortunately, he makes the bad decision to let her go. So, there’s set up number one.

Next, we witness the next setup/plot which has to do with a drug deal gone wrong between some bad guys in a motorcycle club. The main bad guy is an intimidating-looking guy named Ram (Joseph Gatt) and he’s not one you’d want to come across in a dark alley.

So, these two plots mesh together when Bishop’s daughter and Ram wind up at the same gas station at the same time. As luck would have it, Sarah accidentally sees something she shouldn’t have, and Ram decides that he’s got to take her out of the picture. He does so in a pretty brutal way and once Bishop finds out that his daughter is dead, the passive preacher has to figure out what his plan of action is going to be. Is he going to retaliate against the man who’s murdered his daughter or is he going to let the Lord take care of him?

In the third subplot of The Retaliators Bishop meets with a cop named Jed (Marc Menchaca) who’s investigating the murder of Sarah. We get a flashback with Jed and learn that he has a secret of his own, which involves a cameo from Papa Roach’s Jacoby Shaddix as a cold-blooded killer. Long explanation short: once everything is revealed to Bishop by Jed, Bishop is given the opportunity to get his shot at revenge on the man who killed his daughter. Jed makes it super easy for him, but once again, Bishop finds exacting the pain and suffering that he’s been carrying inside of himself on another living person hard to do.

And THAT’S when The Retaliators becomes annoying.  The emotional struggle that Bishop deals with is frustrating to watch as he’s given several opportunities to take out the sick son of a bitch throughout several scenes and he doesn’t. He’s made to look like Ash from The Evil Dead and he’s just as bumbling in a few scenes, but without the campy fun. Towards the end of the film there’s a holiday theme that’s just kind of hokey, and it’s at this point that the movie just needs to end quicker than it does. Once the film does end, you can’t help but breathe a huge sigh of relief.

The Retaliators isn’t the worst film I’ve seen, but it’s not the greatest. It has its moments, but it left me wanting. The acting and effects work well enough. The gore is plentiful, and the score is enjoyable.  I think the writing team of Darren Geare and Jeff Allen Geare, along with directors Samuel Gonzalez, Jr. and Bridget Smith did a fine job. However, I also think they were a bit too ambitious for their own good. As a result, the story never truly comes together. 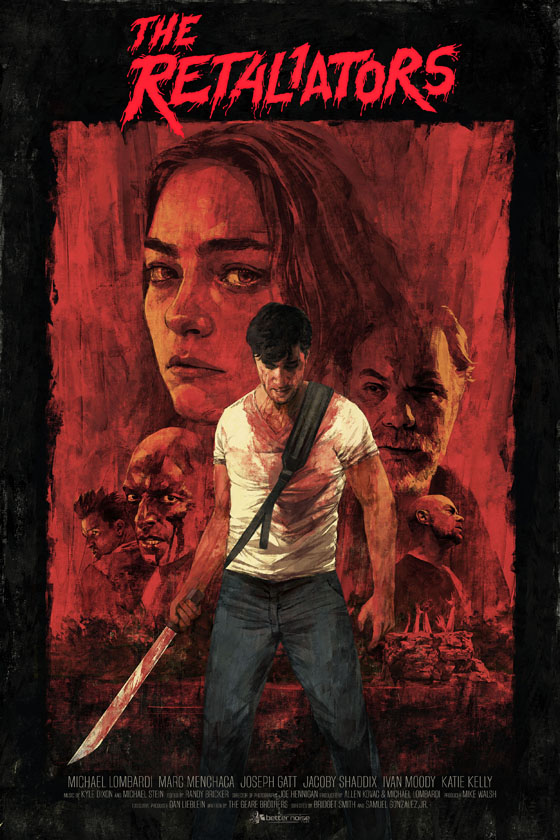