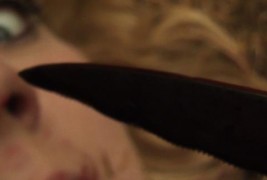 The best horror films are made by horror fans because we, as a genre community, are snobs. We like our deaths to be creative, our storylines to be thorough and our blood to be the right shade of red. We get it where other filmmakers and fans don’t.

Gav Chuckie Steel gets it, and he proves it in a big way with his directorial debut, a glorious little gem of an indie horror flick called THE SHADOW OF DEATH.

THE SHADOW OF DEATH is a non-budget British slasher picture that pays homage to the classics in just about every way possible. From wonderful kills to gritty camera work, the execution (no pun intended) of the film works on a variety of levels. Plus, it has a kick ass tagline: “Today’s the day the worms have their picnic.” Brilliant.

Steel is a self-described horror fanatic and his affinity for the genre really shines brightly throughout the eighty-one minute running time of SHADOW. The movie tells the story of four friends who venture out into the woods of Southern England to meet up with a drug dealer when their supply runs low. Of course, it’s never safe when young women wander through the woods in the world of horror and we all know that drugs are simply bad, mmmkay?

Debra (Corinna Jane), Jamie (Jamie West) and Nancy (Sophia Disgrace) team up with Nancy’s ex-boyfriend Dan (Daniel Carter-Hope) on their pot journey, not knowing that there is a maniacal murderer lurking in the foliage. Soon, the friends find themselves in an abandoned cabin with their fate resting in the hands of a “super special officer cop” by the name of Officer Craven (Dan Bone). You see, Craven isn’t really a cop. He’s just a doofus who wants to follow in his father’s footsteps. Pops was a police sergeant while ol’ sonny boy is just using an illegal police radio to pick up the left overs of the local police. Officer Craven is straight out of a Troma film, talking to himself and doing some sweet ass ninja moves while on his way to find the missing ladies in the woods.

Steel fleshes out his script nicely, from attaching an urban legend to his killer to beefing up the characters enough to allow them to withstand a full-length film and keep the audience engaged, THE SHADOW OF DEATH is one helluva fun flick! Seedy in the best way possible, the film achieves levels of success with a shoe string budget and plain old camcorders that most other indie flicks can only dream of. We have the archetypical cabin in the woods, as well! That LAST HOUSE ON THE LEFT meets FRIDAY THE 13TH feel really strikes a raw horror-loving nerve deep down and makes the viewing experience that much more enjoyable.

The death scenes and gore in SHADOW are glorious. The DIY special effects are aces in my book. I have never seen someone killed with a bong before. Double bonus points for that, Mr. Steel. As if that weren’t enough, there’s a fellow with a sickly penis and a bicyclist who loses an arm in a gruesome way and can’t seem to ride without both hands on the handle bars.  Mixing comedy with horror, it’s just another reason Steel has a bright future in the low-budget horror scene.

Another aspect of the film that shines brightly where most other indie flicks falter is the acting.  Whether by sheer luck or by being one hell of a talent scout, Steel found himself quite an ensemble to bring this picture together. Each character has their moment in the spotlight and none disappoint. The character development is enough to keep you hooked throughout the entire film; although no one person is really anything we haven’t seen a million-and-a-half times in a horror film before. Stoners, nerds, and bad asses, oh my!

Steel is in full command throughout this film, using the camera to tell his story, while employing just about every trick in the book, including a nice use of subtitles when background noise gets a tad too loud to hear the actors completely. Steel has thought of everything, folks! Any negatives against the film can be attributed to budget restraints and the understandably rough around the edges style of Steel as a director. This is his first film and yet he achieves more with this film, on this shoe string budget, than most B movie directors do in their best film on their resume.

All in all, THE SHADOW OF DEATH is a film made for horror fans by horror fans and it’s one of the best independent horror films I have seen in a long time. 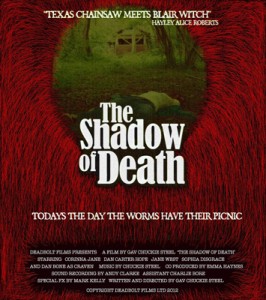