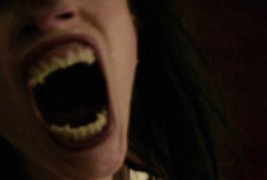 V/H/S is a twist of the much hated and tired “Found Footage” genre of Horror films. Even worse, is that parts of the footage are grainy, shaky, and all over the place — identical to my father filming my sister’s ballet recitals in the eighties, or like Michael J. Fox eating Grape Nuts. Getting that tripe out of the way, and if you can stomach the Parkin-cam, you’re in for a nice little nugget of a film.

The movie stars some creative types that are by no way seasoned in the genre, but definitely have their feet wet. I hope they continue down this dark path because I definitely see promise in their past films, as well as V/H/S.

For instance, Lane Hughes and Adam Wingard both from Pop Skull and A Horrible Way To Die both of were directed by Wingard. Some of you may remember Wingard cutting his directorial teeth on the slasher flick Home Sick at the raw age of only nineteen. There are also more contributing writers on this film than Paris Hilton’s had bouts of syphilis.

The movie starts out with a group of dip-shits filming in first person and briefly vandalizing properties and mildly sexually assaulting women in public and in broad daylight. Next we cut to them in what seems like a squat-house as they argue over how much money they can get for their “nudie-vids”, one dip-shit confesses he knows how to make some real cash — by going to a certain house and stealing a mysterious videotape, and off they go.

At the house, the movie’s continued to be shot by the gang in first-person as they methodically search the house. The movie takes an interesting turn when they find something morbidly unexpected in one of the rooms of the noticeably vacant house — a dead man sitting in a chair in front of a bunch of snowy TVs with dozens of VHS tapes scattered about.

The gang decides to leave one of their own alone in the dead man’s room to check through the videotapes for the coveted “mystery tape”, while the others do the same in the rest of the house.

This is where the movie takes a unique twist. A kid puts in a tape and we’re thrust into another story, on tape, already in progress. It seems like a normal bunch of kids going on a quest to the club to get laid, with one of them wearing glasses wired to a video camera, but it soon starts to take a turn for the worst, then it gets just plain fucked-up, and the tape ends. Now, we’re briefly back to the main storyline before another tape is jammed into the clickity-clackity VCR and we’re forced into a whole new story on tape.

The movie does this several times, each time alternating between “real time” footage and footage from the tapes.

I really liked the different stories on tape better than the main plot. Each one features a different kind of evil than the last, not concentrating on just the paranormal, or just evil people.  There’s a whole mess of bedlam. Each instance starts out tame and progressively gets worse and worse.  I was eventually forced to let out a solid, “What the fuck!?!” The dead man has some straight-up bizarre taste in entertainment — my kind of dude, for sure. And the tapes are not the only place you get to see the horror. Remember there is a main plot happening while “we” are watching the tapes.

I’ll leave you there. I have outlined the movie to a “T” but I assure you there is plenty to watch in those tapes. All together, this jaunt through these terrifying tapes was fun and freaky. You’ll see some sickening shaky-cam action, but you cannot turn away because there are some crazy good moves in this movie. It’s available via Video On Demand and it hits theaters on October 5th.  I can’t wait and I can’t recommend it enough. It’s always much better to share a movie like this with true Horror fans and I hope you die, er, I mean, to see you there.

One thought on “V/H/S Movie Review”