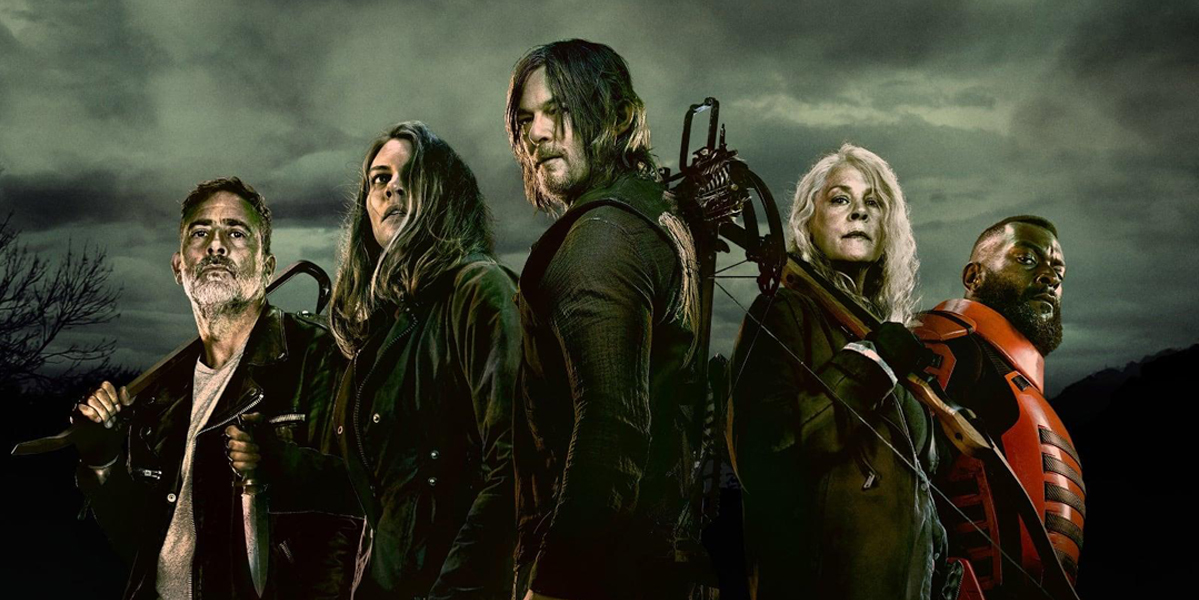 It’s finally here! The very last season of AMC’s hit horror opus The Walking Dead is coming in for a landing and we’re already neck-deep in rank offal. It’s mind-blowing to think about how this ultra-gory television show about zombies of all things began relatively unassumingly all the way back in 2010. So much has changed since then. I bought a house. I had a kid. Hell, I survived a pandemic (knock on wood) which felt kind of like a zombie plague. And all the while, Rick and Carl, Daryl and Carol, Maggie and Michonne, and so many other characters slogged on for better and for worse, braining walkers and arguing with each other over how best to survive the apocalypse, themselves. And while I’ve bemoaned the quality of the series over the course of its later years—and rightfully so—I’m not too proud to admit that I’ll be a little sad and a bit lost after it’s over….

The show’s currently bloated footprint on AMC includes four separate series and multiple movies. That, combined with Covid-induced production delays, means that this season, like the last one, is going to roll out a bit differently than most seasons past. Instead of 16 episodes broken into two eight-episode chunks and separated by a hiatus, this season will deliver 24 episodes in three eight-episode chunks ending in late 2022. So, if you were wondering why we’ve abandoned our “Midterm Report Card” titling conceit, that’s why. And now that the first eight episodes of The Walking Dead’s final season are in the books and the end is nigh, we can jump in.

When we left off, Maggie (Lauren Cohan) had returned to Alexandria from Meridian – a settlement she’d started and had led until it was taken by a hostile group of survivors known as the Reapers. Alexandria’s resources were badly depleted after its de facto sister settlement Hilltop was raised by fires started by The Whisperers. Meanwhile, Eugene (Josh McDermitt), Ezekiel (Khary Payton), Yumiko (Eleanor Matsuura) and Princess (Paola Lázaro) were being held captive inside boxcars at a mysterious settlement that seems to have many of the creature comforts and technology from the “Before times.”

As season 11 begins, food is in even shorter supply at Alexandria. As a result, Maggie leads a team back to Meridian to commandeer the food stores left behind there. Her group includes Daryl (Norman Reedus), Gabriel (Seth Gilliam), Alden (Callan McAuliffe), and of course Negan (Jeffrey Dean Morgan) – the man who brutally and needlessly murdered Maggie’s late husband Glenn in front of her so many years ago. 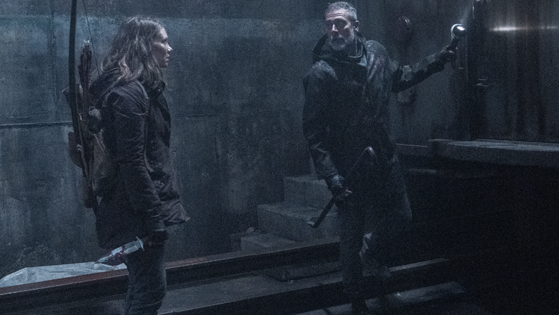 It’s not long before they’re ambushed by the Reapers, killing Cole and Duncan who had travelled with Maggie from Meridian, wounding Alden, and separating Daryl and Dog from the others. Inevitably, Maggie’s left to complete the next leg of the mission alongside only her hated nemesis Negan. Eventually the pair are rejoined by Gabriel and Elijah (Okea Eme-Akwari), and Negan teaches Maggie the way of the Whisperers so that together they can dress up in gross zombie-skin outfits and lead a herd of Walkers into Meridian.

After Daryl gets captured by the Reapers, he learns that his former lover Leah (Lynn Collins)—from last season’s filler episode explaining how Daryl ended up with Dog—is one of them. She convinces Daryl to ingratiate himself to their leader, Pope (Ritchie Coster)—a veteran of the war in Afghanistan and a cruel, angry man. Daryl agrees, while also secretly using the opportunity to be a mole for Maggie and the others.

Elsewhere, as Eugene, Ezekiel, Yumiko and Princess are being processed and debriefed by a combination of soldiers and bureaucrats, we learn that the Commonwealth is a large network of settlements containing tens of thousands of survivors and led by some form of new government. Here we meet Stephanie (Chelle Ramos), Eugene’s radio fling from last season, and the inspiration for his and his group’s trek to West Virginia.

As our heroes navigate through processing at the Commonwealth settlement, they vacillate between being in their captors’ good graces and being punished for violations that they—and we—don’t really understand yet. And this comprises the other major track of the season: Just what the hell is the Commonwealth, exactly?

The Commonwealth and Meridian stories culminate separately in this eight-episode segment’s penultimate episode and finale, respectively (episodes seven and eight). We leave our pals in the Commonwealth right after a Rube Goldberg Machine of coincidences has Eugene punching the Governor’s son in the face. What governor, you ask? Stay tuned. While Eugene is imprisoned, he’s offered his freedom in exchange for giving up the location of Alexandria. Uh-oh. 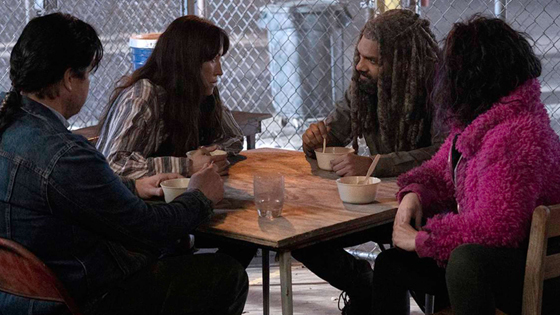 And what of Alexandria this whole time?

The rest of the series regulars including Carol (Melissa McBride), Jerry (Cooper Andrews), Rosita (Christian Serratos), and Aaron (Ross Marquand) have spent these first eight episodes largely holding down the fort at Alexandria in the face of starvation, fatigue, and paranoia, doing their best to cobble together what little food there is and to keep the walls standing. The most consequential thing this group does is find Connie (Lauren Ridloff), who’s been missing since the second-half premiere of season ten.

But as far as the finale goes, the Meridian story is the main event. Daryl and Leah ostensibly help Pope defend Meridian from the walker herd led by Maggie and the others in Whisperer masks. However, after Daryl secretly helps Maggie and Gabriel infiltrate the settlement, he confesses to Leah where his true allegiances lie and invites her to join him, Maggie, and the others. As Pope prepares to fire a hwacha—a Korean weapon from the 16th century that shoots hundreds of rocket-propelled arrows—at Walkers and Reapers alike, everything comes to a head. As it turns out, Pope’s wonton disregard for his Reapers is a bridge too far for Leah who’s more loyal to the Reapers than she is to Pope, so she kills him.

Rather than joining Daryl and escaping, Leah jumps on her walkie-talkie and outs him to the Reapers as a member of Team Maggie and blames him for killing Pope. The hwacha fires away as we fade to black.

One of the more interesting things about this final season so far is that at long last characters are proactively taking measures to protect themselves and their people again. It’s like a cool drink of water after being stranded in the desert for half a decade. Of course, there’s nothing to indicate that this return to basic storytelling best practices isn’t just because there’s an inevitable conclusion ahead—an actual end date forcing the writers’ room to complete our heroes’ arcs. But I’ll take it how ever I can get it, even if it is way too little and way too late.

Let’s remember, for five seasons we watched an ensemble of complex protagonists develop from average people—men and women, parents and children, couples and loners, young and old, cops and cons, and everyone in between, instinctively trying to retain the social framework and rules from the “Before Times”—into a collective of moral but ruthless survivors as they slowly realize there are no rules or framework left to speak of. Compelling stuff. Plus, again, ZOMBIES!

Then, halfway through season six, we met Negan which forced our characters to abandon all that well-conceived, impressively executed characterization, all of it subjugated in service to the “Negan and the Saviors” plotline. What we got next was about five seasons worth of passivity, our heroes refusing to act. In fact, during that stretch the main source of tension wasn’t some new outside threat or some walker evolution. No, it was merely one protagonist after another deciding at the most inopportune times to arbitrarily follow a path of pacifism—again, merely refusing to act—and thereby sabotaging the efforts of the other protagonists to save themselves. This happened over and over again as if on a loop, rotating characters in and out of the pacifist role. It put the show’s entire narrative apparatus on a treadmill, slogging away but going nowhere.

It’s early yet in this curtain call season, but Pope is far and away the series’ most effective villain going all the way back to the Governor from seasons three and four. He is a viable menace onscreen and that’s been missing for a long time. That’s why killing him off now is so surprising. It surely must indicate that something worse is coming to fill the void. Will it remain Leah? Or will she inevitably end up a place holder for a more nefarious character? That’s one of the major threads of interest going forward this season. 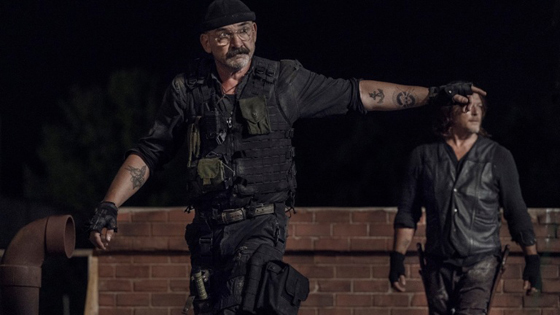 Much of that remaining narrative path forward is marred by the writers having painted themselves in years ago. Some of these problems can’t be avoided. For example, by making everything that had come before season six subordinate to “Negan Fan Service” for a few seasons in a row, Maggie and Negan’s current working relationship will never ring true because it can’t be justified. It’s a classic case of chasing short term success to the detriment of the big picture. It’s been written about at length here many times. It is what it is.

So, here we find ourselves one-third of the way through the final season of The Walking Dead. It feels strange to even type that. There’s a latent, yet palpable sense of relief in the offering here, Horror Fans. We just have to get to the finish line. Not a lot has happened over the course of these past eight episodes, but when something has happened, it’s been with purpose. It’s moved us toward the end and that’s the very essence of storytelling. And perhaps most importantly, our heroes are acting like it again, at least in fits and starts.

If these eight beginning-of-the end episodes are any indication, it looks like the dedicated crew responsible for The Walking Dead is going to be able to land this plane after all. Finally. Mercifully. And I intend to be at the end of the runway with a popcorn.

See you after the next eight episodes, Horror Fans.