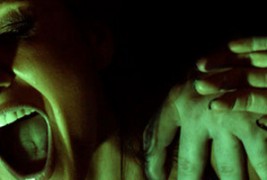 Todd Jason Falcon Cook’s latest movie, ZOMBIEFIED (Screamtime Films DVD) is a mash up of two beloved horror subgenres – the slasher flick and the zombie flick.  Add a liberal dose of metal tunes and you have Cook’s latest horror opus.  So, does it work?  Well, you should know that mere obstacles such as an incoherent script, no money, and very little conventional know-how are no match for Cook’s enthusiasm.  He seems to have attacked this film’s production the way his zombies attack their victims, mindlessly yet viciously, and miraculously, yes, the resultant movie somehow works.

ZOMBIEFIED begins at a packed Houston-area metal show.  The fans press the stage in a full-throated frenzy for the live musical massacre before them, but when someone plays a taped death metal song over the P.A. (marked DO NOT PLAY) everyone within ear shot turns into zombies.  The concert quickly turns into a full-stomached frenzy after an honest to goodness massacre.  As the arterial spray and ripped flesh kaleidoscope spins away, Alana (Rebecca Torrellas), the vocalist for the band Kill Order escapes the concert venue and goes on the lam from the ravenous horde.

Soon we learn that the zombies are controlled by a psychopath wearing a Richard Nixon mask who sics them on people just sort of randomly, it would appear.  Alana literally runs for her life, all the while picking up clues and slowly (despite all the running) putting together what’s happening.  It just so happens that two of her cohorts, Angel (Kathryn Rene’ Ginzel) and Tommy (Mike Gebbie) survived a similar ordeal thirteen years earlier, when the band, Living Corpse, first released their zombie-making hit single.  The zombie antidote is out there, in song form (natch), but can Alana get a hold of it and use it to save the day, or will Richard Nixon kill everybody with his zombies?

So again, it bears mentioning that ZOMBIEFIED is completely incoherent, something you critical readers may have gleaned from the synopsis above.  By and large, the acting isn’t fantastic (to be fair, it’s also not terrible).  The cinematography and lighting are amateurish.  And the movie’s overly long.  Yet, somehow, some way ZOMBIEFIED quickly propels itself forward, gaining momentum and sustaining it, however improbably, though out.

Normally, a movie that’s this rough around the edges creates a difficult slog through which viewers are expected to suspend disbelief nonetheless.  And in fact, at no time does it NOT feel like you’re watching a goofy no-budget ode to ‘80s horror flicks made by ambitious fans, yet Cook approaches his film as if these rough qualities are inconsequential.  By doing so, well, these qualities really are inconsequential.  As a result, ZOMBIEFIED is bestowed with an inexplicable, vice-like grip on viewers from start to finish.

So what does all this mean?  In the long term it means Todd Jason Falcon Cook possesses certain intangibles that all filmmakers, great and small, covet unconditionally.  Given a moderate budget and a semi-experienced crew, Cook could make tsunami-sized waves in the horror pool.  Of this I have no doubt.  But for now if you’re an aspiring filmmaker, ZOMBIEFIED is an incredible lesson in “cinematic paradox”.  And for the rank and file horror aficionados, it’s also a gross, funny, and completely weird thrill ride.  If you’re a fan of movies like Lucio Fulci’s CITY OF THE DEAD and THE BEYOND, or even if you enjoy a good fever dream every now and again, then ZOMBIEFIED is well worth your time. 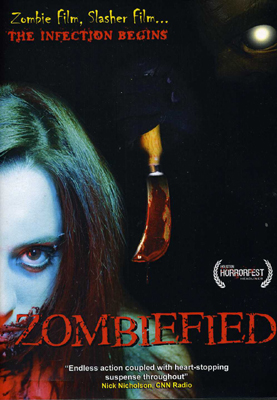