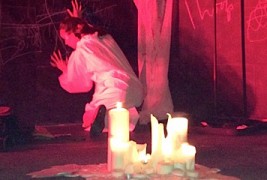 I may be a history geek, but that doesn’t mean I want to hang out with Calvin Coolidge.  I found this out the hard way, when a Coolidge impersonator dropped by our ninth grade auditorium.  Admittedly, the bar had been set pretty high after a visit from a Frederick Douglass impersonator a few years before.  Not only is two hours with Frederick Douglass an innately more appealing prospect than two hours with Silent Cal, but this guy was the Samuel L. Jackson of Frederick Douglass impersonators, filled with a vivid combination of unsullied dignity and smoldering rage.[1]  Some Sunday Coolidge just wasn’t going to top that.  Portraying a historical figure has an inherent double challenge: not only do you have to pick somebody we actually give a damn about meeting—you have to make us believe we’re actually meeting them.  Rhea Amos’s one-woman play, Blood Bath, is a jaw-dropping little piece of Horror Theater that succeeds brilliantly at both requirements.

Blood Bath tells the story of Erzebet Bathory, the sixteenth century “Blood Countess” of Hungary.  While her husband led campaigns against the Ottoman Turks, Bathory was alleged to have tortured and killed up to 650 young women, bathing in their blood to preserve her youth.  Tried in 1610, the accused Blood Countess was found guilty and condemned to spend the rest of her life in solitary confinement.  She died only four years later.  Featured in movies, video games, heavy metal songs, and even action figures, Bathory’s guilt remains the subject of debate among historians.

Amos’s play ran for four days at Denver’s downtown Bakery art collective.  I caught up with her after the play’s final night to learn what it takes to slip into the bloodstained shoes of one of history’s most terrifying serial killers.

Ravenous Monster: How did you get into acting?

Rhea Amos: I got into acting when I was very young. When I was five or so, I would put on elaborate productions on my grandmother’s fireplace mantle, these hour-long rambling productions where I would force my family to watch me make up words and dance. My grandmother was a drama teacher, so I grew up seeing her really changing lives with theatre, and I think it was then that I decided I wanted to do that, too.

RavMon: What initially drew you to the story of the Blood Countess?

RA: I read a book a while ago called The Blood Countess by Andrei Codrescu. The book is very fictional and contrived, very Anne Rice.  It portrays Erzebet Bathory as this sexual deviant who was definitely guilty of killing children and bathing in their blood. After I was finished reading this book, I was pretty disappointed but still very intrigued by the character, so I found a historical biography of Bathory and also a book of some of her letters. The biography painted her as guilty as well, but after reading the story and thinking of the time period, I was really haunted by the idea that there was a whole other side to her story that no one explored, which was her potential innocence. In the course of her life, she did so many remarkable things and she was such a smart and powerful woman, it interested me that she was never allowed to speak at her own trial, and that the whole trial occurred about six years after her husband’s death. It also intrigued me that her body has yet to be found, to this day. All of these things seemed to me to be very dramatically captivating, like a show that should be written, something that would not only be entertaining but also a more well-rounded portrayal of what really could have happened to Erzebet Bathory.

RavMon: You both starred in and wrote the script for Blood Bath. Can you give us a sense of your writing process?

RA: I started by taking bits and pieces of letters that Erzebet Bathory wrote that I liked, and then I decided to build on that with my own fictionalization based on the historical context of her story, but also the missing part of the story usually told about Erzebet Bathory, which is her very feasible innocence. I began writing this play last winter, and then I got very busy so I had to put it aside, but this summer I rediscovered it and decided that I would finish it, so I plunked most of it out within two weeks and then began asking some of my favorite local playwrights to read over it and give me criticism.

RavMon: What kind of research did you put into Bathory’s life and the historical events happening around her?

RA: I read every book that I could on her life. The awful one called The Blood Countess; also I discovered Kimberly Craft, who actually travelled to Hungary and found letters and court documents about Erzebet Bathory and translated them to English. Her take on the Countess also heavily leans to her guilt, but the information that she presents strongly speaks for itself, especially Bathory’s letters. After Erzebet Bathory was found guilty, any proof that she existed (like letters and historical documentation) was burned and destroyed, which becomes difficult for a writer but also very exciting. There’s a lot of freedom to take the little factual information that we can find about her, and from there make your own conclusion about her guilt or innocence.

RavMon: You give Bathory very distinctive posturing and verbal delivery, at once halting and mesmerizing, awkward and menacing.  What inspired you to portray her this way?

RA: I was very intrigued by the Countess’s punishment, that she was locked in her chamber in solitary confinement for four years until her death in 1614. This four year span of her life fascinates me; to me, this punishment seems worse than execution, and some of the records of her life that were not destroyed were accounts of people in the castle that walked by her chamber during her confinement and heard her talking to herself. A week in solitary confinement would be maddening, but the thought of four years being isolated from all other people is very dramatically interesting. She was nobility, so I was inspired by the grace of someone with power paired with the awkward breakdown of a person left to die to portray her character as a woman who survives for four years and begins to torture herself in her confinement.

RavMon: One of the most fascinating aspects of Blood Bath is that you keep Bathory’s guilt ambiguous. Do you think she was innocent?

RA: This is most likely very bad to say as a writer and as a performer, but I personally haven’t been able to make up my mind yet! In performance, I portrayed her as I think she would want to be portrayed, which is sympathetically. She was a human being with a family, and she was a very compassionate leader. But she was also tortured, and the nature of her accusation and punishment was very barbaric. So as a performer, my angle was to go with the concept that she was innocent, but she eventually is consumed by the darkness and claims to be guilty to make her death a little easier to swallow for herself. As a writer, my ultimate goal was to make the audience the jury that Erzebet never got the chance to testify in front of, so the verdict becomes your choice, given the information that you have about her.

RavMon: Who are your biggest acting influences?

RA: My acting influences are a little strange! I draw a great deal of inspiration in my movement during performance from Martha Graham, an American modern dancer and choreographer. Her movement work is both terrifying and captivating, her use of the human body as an instrument is so interesting and I draw from that as a performer. I am also very captivated by the life and influence of Sarah Bernhardt, a French actress that became an icon in the late 1800’s. Her larger-than-life stage presence was world-renowned, and her dedication is really inspiring.

RavMon: What’s your relationship to horror as a genre? Do you consider yourself a fan?

RA: I am a horror buff! I am so fascinated that the horror genre has really gained momentum as of late. I’m really intrigued by the popularity of mainstream TV shows like “The Walking Dead” and “American Horror Story.” I’m a huge fan of both of these TV series. I love Guillermo del Toro and his horror film work, some of the most well-made horror media I’ve ever had the pleasure of experiencing. I love haunted houses, especially around Halloween, because they are so all-consuming. We know it’s not real, but it becomes real—it becomes more horrifying than we can expect, because it’s reality. I think this is what draws me to the power of horror theatre, I think we can conjure up the same feelings, feelings that you can’t get as intensely from film, because the horror becomes a reality.

RavMon: Blood Bath ran for only four nights. Any plans to reprise the role?

RA: I am really surprised that it was so well received! There have been talks of making it a yearly event, maybe doing Blood Bath every Halloween weekend. There have also been talks about touring the production, all very exciting!

RavMon: What’s next for Rhea Amos?

RA: My dream is to create my own horror theatre company. This first piece was definitely a large step in the right direction, and I was really taken aback by the positive response that this play received! Right now I am working on writing another horror play, a piece that will focus on creating a very chilling environment, more along the lines of the way a haunted house can make you feel, but in a theatrical setting.