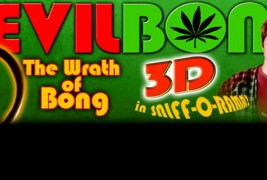 On April 23rd, the Charles Band Road Show raped and pillaged its way to the Orpheum Theater, located on the infamous State Street Pedestrian Mall in downtown Madison, WI. This evening’s gathering was a stop along the World Premier Tour for Full Moon Pictures’ latest freaky film, Evil Bong 3-D: The Wrath of Bong, presented in three dimensions and with the added wonder of Sniff-o-Rama! Alcohol was consumed in the name of cinema appreciation, breasts were bared in the name of audience participation, and the great Sid Haig was made paranoid by a certain webzine photographer’s Camera of Doom – more on that later.

Amid booze, boobs, bongs, and the bizarre, Ravenous Monster showed up to devour the entire spectacle.

Upon entering the theatre lobby, fans were presented a pair of cardboard 3-D glasses and a card containing eight numbered scratch-n’-sniffs – a harbinger of the gross olfactory assault to come. Once we’d been given our implements of sensorial suffering, the Full Moon Pictures merchandise machine forcibly removed the money from our wallets and crammed our arms full of Puppet Master Box Sets, and Evil Bong T-shirts and the like with near-lethal efficiency. Well, not exactly, but with Incest Death Squad’s Cory Udler and the exploitation flick super-capitalist, Charles Band himself manning the merch tables, my description isn’t too much of a stretch.

The truly great Sid Haig sat just beyond the merchandise, hocking his own stuff and amiably signing autographs and posing for pictures. Sid was a cool cat – well, between barking out Captain Spaulding one-liners anyway. Everything on his table cost twenty bucks and so I plopped down a pretty, green picture of President Andrew Jackson in exchange for an 8×10 of Bill Mosely, Sid Haig, and Sheri Moon Zombie on the set of The Devil’s Rejects. Sid signed the picture to me with the inspiring quote, “We’re here to fuck up your day”.

Then it was time for Ravenous Monster photographer and scribe, Billy Boyce to shoot some pictures of Sid and me. Billy’s camera snaps more shots in a minute than a M134 Minigun spits out rounds. Amid the lightening storm of flashes, Sid threw his hands up and asked if he was being arrested, which prompted Billy to ask him to calmly put his hands down and begin reciting a bullshit version of Miranda Rights. Ravenous Monster doesn’t just cover horror stars, we scare them too. It’s only fair.

Next we moved into the theater proper. Since the main event was the Evil Bong 3-D screening, the festivities began with a stripped down and condensed version of the Charles Band Road Show. Charles took the stage to talk about his career path – the circumstances that led him to the moment we were all experiencing. It was reminiscent of my college days if my professor had been a horror and exploitation filmmaker and the curriculum revolved around how the promo poster for Ghoulies undid centuries of potty training over the course of a single weekend.

Soon it was audience participation time. Charles set up a faux movie scene involving revenge, a botched execution, deadly lasers and BOOBIES – a staple of the Road Show. And I must note here that my research for this piece uncovered several facts, not the least of which is that BOOBIES must always be spelled in CAPS. There were a few male roles and one female role. Audience members were asked to come to the stage to audition for each role by explaining why they were the best choice to play their respective parts. The rest of us were asked to vote by applause, with the winner of each role remaining on stage. The majority of the aspiring actors were far weirder and a good deal more frightening than anything we would witness onscreen later.

When it was time to cast the female role, Charles explained that the character may have to bare her breasts, but for purely artistic purposes, of course. Three of the four potential actresses had no reservations about this particular element of the performance – in fact one of them, when asked why she should get the part, explained that “a set of 36-D’s and no gag reflex” made her the most qualified. And with that, the one female role quickly became three female roles. As the scene unfolded, it was cringe-inducing and more than a little awkward, ending with three exposed sets of the aforementioned BOOBIES. Did I mention that Charles Band makes exploitation movies?

Finally, it was time for the main event – Evil Bong 3-D! The lights dimmed and after a rousing trailer featuring clips from the Full Moon canon set to Guns n’ Roses’ November Rain, it was time for the feature. Evil Bong 3-D is not about a sled named Rosebud. It’s a horror comedy about an extraterrestrial bong that transports its smokers, our heroes, to a world inhabited by mostly-nude weed aliens who are harvesting human semen for nefarious, world-dominating purposes. Can our heroes figure out a way to get home? It will come as no shock that the film is silly, disgusting, and ridiculous, but endearingly so. In short, it’s a blast. The large cast includes stars John Patrick Jordan, Mitch Eakins, Brian Lloyd, and the lovely Robin Sydney.

Evil Bong 3-D doesn’t need any help being an over-the-top spectacle, but apparently 3-D just wasn’t enough for Charles Band. No, in order to truly get the audience into the palm of his hand, he needed us to smell the movie. This where our card of 8 scratch-n’-sniffs came into play. During the course of the movie numbers appear in the lower right corner of the screen, each corresponding to a scratch-n’-sniff with the same number. The majority of the scents were of various strains of space-weed, and some others were run-of-the-mill such as perfume and pizza. In fact, I recall the filmmakers taking full advantage of this potentially malicious device only once with a well timed fart sequence, a smell that was alarmingly similar to that of the pizza and a joke that would later come back to bite me in the ass, appropriately enough.

Upon exiting the theater and making my way back into the lobby, I spotted Charles Band behind one of the merchandise tables. He was standing with an attractive young lady whom I failed to recognize as Robin Sydney, mainly because her hair color was slightly different than it was in the movie I’d just finished watching. That’s right, hair color threw off my keen powers of recognition and this led to my attempted conversation with her about the inherent value of fart jokes – a conversation that is as horrifying in retrospect as anything ever committed to film.

It’s fortunate that I’m not a species because those aforementioned “keen powers of recognition” combined with the law of natural selection most certainly would have rendered me extinct. At best, I could expect to live on as a Flintstones character alongside their pet saber-toothed tiger. However, as an individual I’m lucky enough to have my friends and my wife around to keep me safe from myself. Although, apparently they’re unable to keep me from talking flatulence with Robin Sydney, but I digress. Both she and Charles were very friendly and it was a nice way to end my coverage of the event.

If you’re a fan of the absurd, the hilarious, the tasteless, or any combination thereof, don’t miss the Charles Band Road Show when it rolls into a city near you. And don’t forget to check out Evil Bong 3-D: The Wrath of Bong! For more information, check out http://www.fullmoondirect.com/.