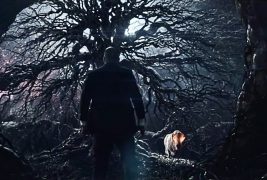 Ladies and gentlemen, your new favorite television series has arrived.

Based on the beloved novel by Neil Gaiman and developed for the small screen by powerhouse duo Bryan Fuller and Michael Green, American Gods just finished its first season and if this season is supposed to be the slow and cautious installment of the series, holy hell are we in for a treat.

Simply put, the first season of American Gods pulled out all the stops and absolutely crushed it.  What’s so fascinating about this first season is that Fuller and Co. fully admit to “slow pacing” at times and promise even more excitement and energy for season two.  And that’s hard to believe, considering I felt season one ran at a breakneck pace from beginning to end and did a marvelous job of fleshing out an incredible ensemble of characters.

Brian Reitzell is the composer on the series and I can’t tell you how many times the theme song gets stuck in my head on an average day.  The music is a small but very important cog in the machine that allows this series to work so beautifully and Reitzell deserves kudos for that.

American Gods is the story of Shadow Moon (Ricky Whittle), a man who is planning the rest of his life that is set to begin within a week once he’s released from prison.  He’s got a wife and a job waiting for him back home.  There’s nothing that could bring him down…

…Except for his wife and best friend (played soundly enough by Dane Cook!) dying in a terrible car accident.  Suddenly, there’s nothing to go home to – no one to share a bed with and his best buddy was the one providing him the job.  Shadow is released from prison a few days early to attend the funeral.  It doesn’t take long for Shadow to catch wind of the fact that his beloved wife, Laura (Emily Browning), may have actually died with his best pal’s penis in her mouth.  Oof, that’s a rough week.

With no prospects to speak of, it seems perfect timing that a mysterious older man who prefers to go by ‘Mr. Wednesday’ introduces himself to Shadow on the plane ride back home.  Mr. Wednesday (Ian McShane) has a job offer for Shadow and while it may involve getting a little messy from time to time, it certainly offers Shadow the financial stability he suddenly was without.

As Shadow and Mr. Wednesday traverse this great country of ours, we learn that something isn’t quite right with Mr. Wednesday.  The man’s got powers and he just so happens to be roping Shadow into some less than ideal situations, including fighting with the world’s tallest leprechaun, questioning his sanity when his dead wife shows up in his motel room and getting hanged from a tree by a group of vicious and faceless bullies. 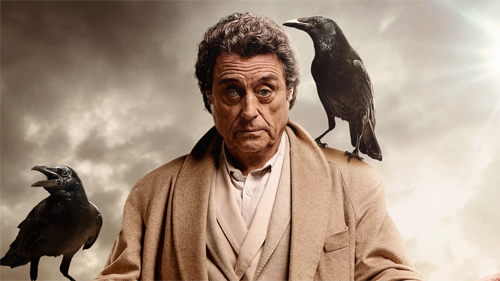 A show this good does not deserve many spoilers and while I already told you Laura is undead and Dane Cook’s penis gets removed, there’s so much to this show that you simply must watch for yourself.  Take it in.  Read the novel.  Lose yourself in a day of Netflix-and-chilling, with an emphasis on truly chilling while watching this remarkable show.

What makes the show tick so spectacularly well is the writing, of course, and the acting.  Good gravy, is there some amazing performances in this show.

Ian McShane can do no wrong, and I’m convinced that’s a scientific fact as proven as Newton’s laws.  The man commands the screen like few others and he simply oozes charisma.

Gillian Anderson slays as the god Media, a role that allows Anderson to spread her wings and show her acting chops big time as she portrays Lucy Ricardo, David Bowie, Marilyn Monroe and Judy Garland.  Things could have gotten even more insane had Anderson portrayed Prince towards the end of the series, as was initially considered!  Anderson is a show-stopper through and through and her skills are used fantastically in season one.

Pablo Schreiber steals the show whenever he is on camera as everyone’s favorite leprechaun, Mad Sweeney.  The foul-mouthed, physically imposing god of luck is a wonderful enough character to practically lead a series by himself, and the showrunners clearly knew that as “A Prayer for Mad Sweeney” gets my vote for Episode of the Series so far.

Orlando Jones and Crispin Glover offer up top-shelf performances as Mr. Nancy and Mr. World, respectively.  I can’t even put into words how much I love Peter Stormare as Czernobog, a god of death, in this series, either.

Probably the most talked about and suddenly popular god (or goddess, in this instance) in the show is Bilquis, played by Yetide Badaki.  She’s a definite man- (and woman) eater and Fuller has promised that she will be a major player in season two.

Emily Browning is Laura Moon, the wife of the star of the show.  Laura isn’t your cookie-cutter sort of wife, nor does she necessarily dredge up a lot of sympathy for how she treats her husband for most of this season, but Browning nails the role.  If characters are meant to be onions, complete with layers and layers to tear away, Laura Moon is certainly one of the most onion-est I’ve ever seen in a television series. 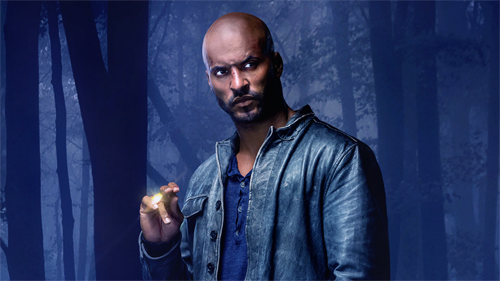 Of course, it all starts and ends with our leading man.  Ricky Whittle is Shadow Moon and you can fully expect his career to blossom gloriously after his fantastic take on the lead role here. He’s an accomplished actor, model, and dancer who hails from the UK and brings Shadow to life in the most wonderful way.  The pain Shadow endures, both physically and emotionally, in this first season is portrayed with such fierce passion for the role, you can’t help but simply figure that Gaiman wrote this character with Whittle in mind.  Bryan Fuller has already promised a “much more exciting arc in season two,” which, again, just blows my mind.  I didn’t think it could get any better than it already is!

Simply put, AMERICAN GODS is absolutely stunning.  Complete with gorgeous visuals, silver-tongued dialogue, visceral deaths and sex scenes as barrier-bending and intimate as any on television, the show has served this novel justly up to this point.  Directors David Slade (three episodes), Adam Kane (two episodes) and Vincenzo Natali, Floria Sigismondi and Craig Zobel (one episode each) stitch this first season together seamlessly.

I’m going to spoil a few more things for you right now, but it’s truly the little things in this series that make it so wonderful, so don’t skip this season on account of the next paragraph:

The season wraps up with so many questions and excitement for the next installment that I’m already counting down until the first teaser trailer is released for season two.  We finally fully understand that Mr. Wednesday is actually the great Norse god Odin.  This isn’t much of a surprise to those who’ve already read the novel or have studied Norse mythology even a little bit, but it’s still a heck of a reveal for the show’s sake.  Shadow has finally seen enough of Mr. Wednesday’s powers to go all-in and profess that he is a true believer now after fighting it for the entire season up to this point.

It’s already been confirmed that season two of American Gods will be ten episodes long, three more than season one.  This season only covers roughly one-third of the novel so you can expect a ton of action-packed fantasy and terror to be cooked up in the near future.

This series didn’t take long to ascend to the pinnacle of television juggernauts, in this writer’s eyes.  There is literally no weak link whatsoever within the inaugural seven episodes of the series.  I await with the utmost excitement for season two as American Gods promises to continue to seamlessly transform a timeless novel into an all-world television series.

Season two of American Gods will premiere early next year on Starz. 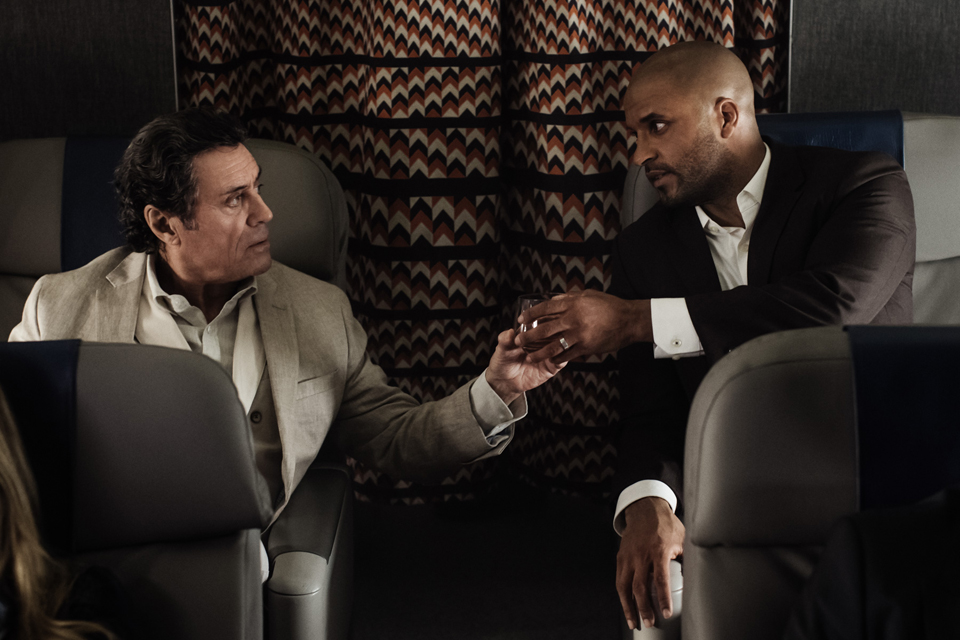