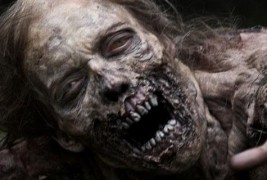 The television horror genre has its arm twisted behind its back and up against the lockers by a big bully named “The Walking Dead” (TWD) on AMC.  It’s a horror hit with hardcore genre fans, and also to your median human.  Why?   People who wouldn’t normally go see a horror flick gave it a chance at home, boosting its popularity.  And most people who have a deep attachment to the comic book series are religiously faithful to all that is dead.  Or did some ‘familiar’ scenes turn them on in the beginning, like they did me?

I could ask those questions all day long, as well as raise questions on why people don’t dig it, but I don’t care.  The questions I want answered are these:  How does TWD stack up to similar shows in the genre? What’s different about it that makes it LIKE or very much UNLIKE others, and what makes a palatable horror show?

What makes “The Walking Dead” different from the others?  Let’s stop there.  What are the genre-shows I can compare TWD to?  Certainly not those cited by the general public, or we would have to throw in “Buffy”, “Fringe”, and “Charmed”.   Just because a show has an element of horror, doesn’t necessarily mean it’s going to make it to the table.  I don’t get any staples of horror such as disgust, fear, and shock from those shows, at least not the way they are meant.  For example, I feel disgust when eying up shows like “Charmed”, and I’m shocked that “Buffy” gets fed into the horror category, and I fear they will make more shoddy shows like “Fringe”.

There are shows that do infuse me with fear and disgust.  “The Twilight Zone”, birthed by genius Rod Serling, is among the shows that hit the spot for me.  The ending of each episode leaves me with my mind twirling, frightened and alone – the latter being somewhat of an anchor to the series.  The ‘Zone’ was a half-hour format, so no sub-plot, and typically a calm set-up to the final mind-altering end.

“Autopsy” was an HBO documentary series narrated by Marlene Sanders, who is a perfect accompaniment to the macabre look into real world horror.  What real humans have done to others is the ultimate terror.  This was no “Forensic Files”.

“Tales from the Crypt” was a fantastic show that was disturbing to children and teens, but followed the same formula as the ‘Zone.’  It was only a half-hour, with a short set-up and the kicker at the end, no cliffhangers and no significant plot.  Like me in the sack, it was just a quick one shot pop and you’re done.

All the horror television shows that I dig don’t have much in common with “The Walking Dead”, except one very important thing: They were “Fresh Meat”, approaching the genre from a unique angle.  This show packs a punch and a pickax, with so much going on in each episode.  The writers are cramming two hours of show into one, which is reminiscent of a comic book, where you only have a limited space to tell the story.  This seems like a negative, but it’s not. You’d just better keep your eyes open or you’ll miss something, or maybe worse.  Besides the fact that the show is fresh, there are other great aspects of this hour-long horror television show.  Like what?  Like GORE, that’s what!  I haven’t seen that much flying brain matter since I killed my parents at the age of fourteen.  KIDDING!  I was sixteen.  Also, it’s an hour show about zombies.  Says it right there in the title and to my knowledge this has never been done before.  It’s pure apocalyptic zombie madness, and I don’t even have to leave my couch to get it.

Does it follow the formula of the “dramatic arc” of exposition, rising action, climax, falling action, and resolution, like most movies, plays and other one hour dramas, in which maybe just one phase is horror? Hell no!  Maybe once or twice over the course of the series from debut to finale, but not per episode. Rather, there is a certain chaos to the show which is on par with what happens in real life.  At the end of every show you’re left hanging, just like the characters.  What do we do next?  How do we do it?  Will it work?  Who knows?  This uncertainty, along with the other attributes I have mentioned is what makes this show unique among all others.

I have to admit, it is not the “Greatest Show on Earth”, but no show can boast that after only six episodes in the bank.  The question is: Does it have potential for the long haul?  I believe “The Walking Dead” is similar to totally dissimilar, but successful shows such as “Seinfeld” and the “Simpsons”, the first seasons of which were rough to put it mildly, but eventually the writers and actors settled into place until those shows were unstoppable.  TWD has this same potential.  The ‘suits’ at the network certainly think so and so do I.  So many shows don’t make it past the pilot episode, but breaking cable records only after two episodes, says a ton.

“The Walking Dead” was green-lighted for a full second season, which speaks volumes. Once the small bugs are worked out, it’s going to be a great series unlike anything we have seen before.  And like the zombies, I want episodes to keep coming and coming and coming and…

One thought on “The Walking Dead and TV Horror”