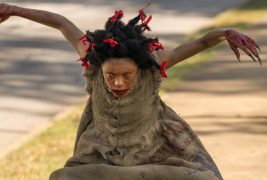 “Jig-a-Bobo” begins shortly after the lynching of Emmett Till, a horrific murder with deep echoes for the Freeman family, since Till was a friend of Diana Freeman (Jada Harris). Trying to escape and be alone with her grief, Diana runs afoul of the Chicago police while Tic, Montrose, and Leti race to find a way to prevent Christina Braithwaite from realizing an evil plan.

Something about “Jig-a-Bobo” doesn’t quite work, and it’s difficult to pinpoint precisely what. Directed by series creator Misha Green, it’s a technically well-done episode, with some appropriately horrifying imagery, but the main thread of the story feels more and more tenuous. The unexpected reappearance of a major character is little more than an aside, and the magical mechanics of the world remain hazy. What exactly is the ultimate aim of Christina Braithwaite’s plot, which now has a deadline? It all feels murky, like a particularly interesting conversation the adults are having while the viewer is stuck at the kids’ table. I won’t say Lovecraft Country has jumped the shoggoth, but it feels like it’s lost its way. With two episodes left to go, I hope Green can right the ship and steer a generally great show satisfyingly home.