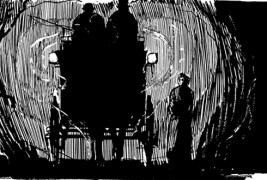 Neo-Victoriana Can Wrap Its Quivering Lips Around My Burnished Steel Galvanophallus of Progress, Or, F*ck Steampunk

When I was about sixteen, some kids I knew became Goths, and some joined the in-crowd and some became stoners, but me?  I went nineteenth century.  I bought a pocket watch and put too much gel in my hair and imagined an alternate life for myself as a Union Civil War veteran in the West.  I would be a gentleman.  I would also have a Winchester repeater rifle and a self-taught knowledge of archaeological lore.  I would have a hot blonde wife (invariably named Victoria) and a sense of courtly chivalry that would prevent any consummation of our love before marriage.  The hot blond wife and the amateur archaeology did indeed come to pass; the Winchester repeater rifle and the pre-marital chastity did not.

What I’m saying is that I get the appeal.  I see how much fun it must be having a sweet Victorian costume and honestly, there’s a lot of steampunk I love–The League of Extraordinary Gentlemen (the comic, not the movie), China Mieville’s Bas-Lag Cycle,[1] the DIY Neo-Victorian stuff, like computers refitted with wood paneling and typewriter keys . . . and at any rate, it’s not horror, so why, Savage Readers, am I talking about it here?  Because it should be.

A lot of good writers (most memorably Charles Stross in his essay, “The Hard Edge of Empire”) have already pointed out that Victorian England wasn’t all lords and ladies and tea parties and Progress if you were a Chinese coolie or Whitechapel prostitute.  There have been some laudable attempts to correct this, like Jaymee Goh’s Silver Goggles blog, which explores the relationship between steampunk and the post-colonial world.  I hear these criticisms, and to a certain extent I agree, but the real reason for my growing hatred of steampunk is less socio-historical than aesthetic.  Steampunk is the new medieval fantasy.

Medieval fantasy used to be a very dark genre, far closer to horror than to the namby-pamby elves and dragons bullshit it’s become.  Read R.E. Howard’s Conan stories or Clark Ashton Smith’s Zothique Cycle if you doubt me.[2]  Old-school swords and sorcery was about fucks-ups and losers and Dark Age sociopaths.  Thirty years after Tolkien, it’s been domesticated.  Steampunk rapidly approaches the same docility, and it hasn’t even been popular for a decade.  There are Steam Greens like the environmentalists who rallied around The Lord of the Rings, seemingly unaware or untroubled by the incredible irony of a movement hearkening back to the Industrial Revolution promoting healthy planetary living.  One especially stupid blog I read blithely dismissed all criticism of the Victorians by showing a picture of two steampunk models with the tagline, “Do these girls look oppressed?”  Well, neither do the characters in my D&D books, but I’ll still pass on being a feudal serf.

But the nineteenth century sources steampunk apes are often as not horror: Dracula, Doctor Jekyll and Mr. Hyde, many of H.G. Wells’s works, and even some of Jules Verne.  Quibblers will say that most of the works I just mentioned really aren’t ancestral to steampunk, but I contend that they constitute part of the corpus of fantastic literature that birthed it.  So what happened?  Where’d the darkness go?  How did the gloom of The Time Machine get replaced by posers in goggles?[3]

A writer buddy of mine, the estimable Alexei Collier, bolts the rivet right on head when he says that creators are given two choices when approaching a given subject: they can be realists, or they can be romantics.  Romanticism favors monolithic good versus monolithic evil, broad strokes and stereotypes and daring heroes against evil hordes.  Realism likes details, shades of gray and uncomfortable questions like, “Who are these heroes, and is every member of the horde truly evil?”  You can have very romantic “realist” fiction (like virtually every Hollywood biopic) and very realistic fantasy.

We horror lovers need to take back steampunk–inject a little of our knife-to-the-guts realism into a genre swarming with daydream believers.  In preparation, Savage Readers, I’ve compiled for you:

The Professor Hunter C. Eden Dark Victoriana Reading List, Or, How To Lose Your Age of Innocence in Five Easy Volumes

To write dark Victoriana, you have to steep yourself in dark Victoriana, like a bag of British East India Company-imported tea wrenched from the bleeding hands of unpaid Chinese laborers.  Below are my five darkest:

Ambrose Bierce:  Bierce’s horror writing is required reading anyway (“The Damned Thing,” “The Man and the Snake,” etc.) but what I’ll recommend most forcefully are his Civil War stories, which are some of the cruelest and most heartbreaking depictions of war ever written.  They aren’t just authorly speculation, either; Bierce served in the Union Army and even got shot in the head (but, ever the badass, survived) at the Battle of Kennesaw Mountain.  His stories rely on randomness, chance and human folly; they make us flinch even now–I can’t imagine the effect they had in Bierce’s day.

The Heart of Darkness by Joseph Conrad:  You probably read this at some point in your school career and were treated to a lot of handwringing about its place in postcolonial discourse and how to properly engage the text and still keep all our theoretical demons at rest.  Forget all that.  What I want you to do is go back and read this most vexed of college lit assignments as a straight horror story: the sailor Marlowe takes a steamboat up the Congo to encounter the insane ivory trader Mr. Kurtz–it’s Cannibal Holocaust before there was a Cannibal Holocaust.  No theory, no critical stances.  If you can divest yourself of all the Freudian bullshit to enjoy Dracula, then you can do the same for Heart of Darkness.  And the scariest thing?  It’s barely fiction.

The Island of Doctor Moreau, by H.G. Wells:  Critics usually call Moreau science fiction, but I think horror has an equally strong claim on it.  Inspired by the continuing controversy on Darwinian Theory and late Victorian concerns about vivisection, Wells’s 1896 novel is far bleaker than any of its film versions.  The archetypal mad scientist tale, Moreau‘s depiction of an insane doctor and his island of beast-men set the stage for every forbidden-research-and-downfall story since.  Jorge Luis Borges, the great Argentine writer of the weird, referred to The Island of Doctor Moreau as “an atrocious miracle,” and to this day it hums with a savage and godless misanthropy.  In addition to Moreau, Wells wrote a number of other pieces worth the time of the discerning anti-steampunk, including “Pollock and the Porroh Man,” about a curse placed by an African shaman on a brutal Englishman and the previously mentioned Time Machine, which takes Victorian class divides to their nightmarish logical conclusion as humanity fragments into two species.

From Hell, by Alan Moore, Illustrated by Eddie Campbell:  Even considering his[4] head start, Jack the Ripper is still probably the most famous serial killer in history.  Moore’s visionary and disturbing graphic novel uses the Ripper murders as a springboard to show off the worst of the Victorian era, rendered in gloomy black and white by Eddie Campbell’s misleadingly non-ornamental pen and ink illustrations.  I’ll break ranks with other admirers of the original comic by saying that the Hughes brothers’ movie isn’t a travesty in terms of visuals and acting, but guts the original (no pun intended) of so much of its spirit and power as to make it a different story completely.

King Leopold’s Ghost, by Adam Hochschild:  The darkest and most frightening book on this list.  Remember how I said The Heart of Darkness was barely fiction?  Hochschild’s engaging, smoothly-written, and horrifying history of the “Congo Free State” tells the rest of the story: how a callous Belgian monarch, through financial manipulation and brilliant PR, claimed a huge swath of central Africa as his own personal property and preceded to spearhead the death of some ten million Congolese through overwork, torture, disease, and out and out murder in quest of rubber and ivory.  Not only does King Leopold’s Ghost make for fascinating, gut-wrenching reading on its own, but it’ll make you want to jump in the shower and scrub yourself raw the next time you see one of those steampunk posers in goggles and a long coat.

Progress and tea parties, anyone?

[1] Mieville, I believe, would refer to himself as a member of the New Weird.

[3] The Time Machine is science fiction, but there’s a vein of pessimism and horror running through the novella that’s totally absent in George Pal’s asinine film version.

[4] Or maybe “her.”  The murders were never solved and even in 1888 there was some speculation that Jack was perhaps a Jill.

2 thoughts on “On Steampunk and Horror….”