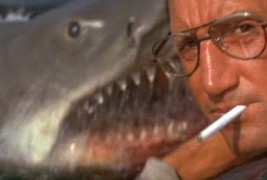 With my deadline approaching on silent, dark wings, I’m sitting here with no idea how to start writing on nature run amok.[1]  I think the Editor-in-Chief technically wanted this column yesterday, but there was enough implied wiggle-room that if I get it to him in the next three hours or so things should be okay.  Easy, right?  It’s three hours, after all.  The problem is that when I woke up it was four hours, and an hour from now, when I’ve still got nothing to write, it’ll be two hours, and then—

My wife and I got a kitten a month or so ago.  He’s a beautiful little black cat named Jameson, with all the endearingly selfish antics we expect from his kind.  He enjoys lying on keyboards that are supposedly in use, stealing food from the dog, and attacking our feet in the middle of the night.  The perfect little writer’s witch-cat, as you can see from the picture below. 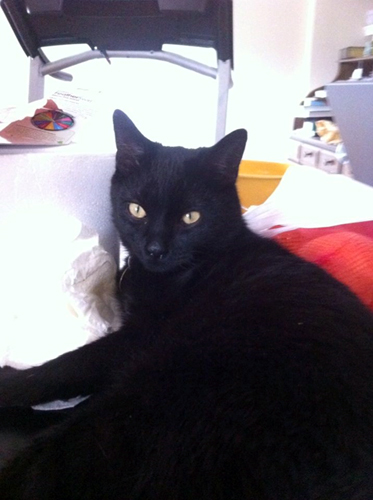 My wife and I want Jameson to be an indoor/outdoor cat, so this morning, we let him out into the yard for the first time with his inter-species brother, Bruce the bichon frisé (see second photo).  Bruce did his usual stalwart hound routine, patrolling the yard and barking at dangerous interlopers like squirrels and little Ethiopian girls on scooters.  Jameson reverted.

One of the absolute best quotes on writing I know comes from author John le Carré, who said, “A good writer can watch a cat pad across the street and know what it is to be pounced upon by a Bengal tiger.”  This says something profound about two species I’ve lived among for years.  We hear domestic cats equated with their bigger cousins frequently—usually in a cutesy way.  But there was something thrillingly primal about seeing Jameson stalk through the high grass in our yard towards a sparrow on a fencepost.

Jaws was the very first horror movie I saw.  I was five, and I loved sharks, so when my Dad proposed we watch the original summer blockbuster as a family, I was (pardon the pun) more than on-board.[2]  It took me two viewings for the movie’s horror to sink in.  The first time, the shark was the hero.  Quint, Hooper, and Brody’s extended battle with Bruce (the shark, not the bichon) was the most exciting thing my young eyes had seen.  I was a little disappointed when the shark got its head blown off, but that was just what happened when titans fought: badasses like Quint got eaten and great whites got a mouthful of explosive oxygen.  It was just the way of the world.[3]  A year later, I watched Jaws again, and it scared the hell out of me.  I don’t know why this was, except that I noticed the effect of the shark attacks more than the shark itself.  The blood, the severed limbs, the head in the boat, the leg drifting to the bottom of the lagoon floor, its torn meat still billowing.  It struck me suddenly that dying by shark attack was a terrible, terrible thing.  I think these two responses have always been part of how we’ve viewed big predators, the world’s last real (non-bipedal) monsters.[4]

In ancient Mexico, there was an idea that humanity was not the apex of creation.  Rather, we shared our perch with jaguars.  Just like North American Indians referred to the puma as “the soft-footed brother,” indigenous peoples of Mexico saw jaguars as being a wild version of humanity.  We have cities, they have rainforests.  We have weapons, they have claws and teeth.  We walk upright, they go on all fours.  The other differences are more or less trivial.  This wasn’t a phenomenon confined to the Americas.  Among the Norse, it was the bear and wolf.  Richard I of England wasn’t “the Bold,” but “the Lionheart.”  In Africa, the lion and leopard.  In India and East Asia, the tiger.  Among the Polynesians, the shark.  The common theme was a commingled admiration and fear.  One could look up to, admire, and even attempt to imitate these animals, but to live beside them meant abiding by certain rules on pain of a very messy death.  In Polynesia, I suspect people realized it was never really safe to get back in the water.

It’s easy for us to fall into one of two essentially lazy modes of thinking about our soft-footed, finned, and scaly brethren: first, that big, dangerous animals like sharks are savage killing machines that must be exterminated.  Second, that such creatures aren’t really dangerous, but simply misunderstood.  The first has caused untold devastation to the natural world.  The second is a fundamental devaluation of what these animals really stand for—and has caused more than a few deaths, as viewers of Werner Herzog’s Grizzly Man will attest.[5]  There’s nothing cute about these animals.  There is beauty, ferocity, and spirituality, but they are dangerous to commodify.  We’re assured that shark attacks are rare (and they are—pigs kill more people), that healthy wolves never attack people (rare, but untrue).  In the end, though, we must accept that, to some animals, we’re food.  Not Kobe beef, maybe, but at the very least spam–and when that’s all you can get, you eat it.

So I’m here, watching my cat hunting sparrows in the yard.  He’s a beautiful animal, chiseled by millions of years of evolution to be a predator of intense efficiency.  I like to think of him as a little panther, as a way for me to touch, to befriend that terrifying shape that drags us out of bomas into the darkness, that leaves us unstuffed and strewn across forest floors.  He is a little panther, and he is my friend.  Consider it an accident of size.[6] 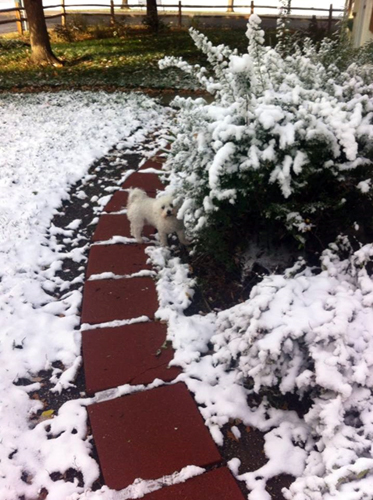 [1] There’s a lot of confusion as to what “running amok” means.  “Amok” is a culture-bound disorder from Malaysia.  What’s a culture-bound disorder?  Well, some mental illnesses only appear in certain societies, and that’s why you won’t find too many cases of ghost sickness outside Navajo communities, “brain-fag” outside Nigeria, or anorexia outside the West.  This doesn’t mean these aren’t real illnesses.  In Malaysia, “running amok” refers to a homicidal mania that strikes the deeply troubled, not dissimilar to workplace and school shootings in the United States.

[2] My Dad’s views on media appropriateness went through a bizarre “boom and bust” cycle in which Jaws was appropriate at five and six but Friends, The Simpsons,and Liar Liar were inappropriate at thirteen.  When I hit fourteen and a half, the pendulum swung back and we watched Apocalypse Now together one day in July.  A year later, at fifteen, he showed me A Clockwork Orange after we went to see Saving Private Ryan in the theater.  At sixteen, my parents threw out my sister and my beloved copy of Goldeneye.  Far too violent for their tastes.

[3] My parents had a long talk with me beforehand about what words are appropriate to say when you’re engaged in a running battle with a rogue great white. I’m not sure why we had this talk, since I knew them all already (I figured there was probably a lot of crossover between words you’re allowed to say when menaced by a man-eating shark and words you’re allowed to say when a backhoe front-end loader is bearing down on you), but I suppose my parents felt a refresher was in order.  After the film, excited, I for some reason felt the need to race around the house shouting, “There’s a shark in the back of that car!”  “Hunter, I don’t EVER want to hear you say that again!” shouted my Mom.  I spent years wondering what she thought I was saying.  Did she think I said, “There’s a shit in the back of that car?”  “There’s a fuck in the back of that car?”  No, I think I’d been pretty clear—there was a shark in the back of that car, and for some reason, my Mom considered it offensive.  To be honest, I still wonder why.  Something to bring up with the crazy doctor, I guess.

[4] For an absolutely amazing examination of how people around the world have related to the alpha beasts with which they’ve shared their environments, I can only recommend David Quammen’s Monster of God: The Man-Eating Predator in the Jungles of History and the Mind.

[5] If you haven’t seen Grizzly Man, it’s a gore-free documentary that just happens to be one of the scariest motherfucking films of our young century.

[6] I had nowhere else to bring this up, so while you’re soaking in the realization that Mittens is just a hundred pounds short of mauling you like a cow, I want to tell you about a heartwarming bonding experience my Dad and I had.  He being an intensely cerebral artist and me being a geek, we weren’t exactly going to go out back and toss around the ol’ pigskin, so we watched movies together—and Anaconda was one of the absolute worst.  We saw it when I was about 14 (so, post-Friends ban but pre-Apocalypse Now), an age when any film featuring Jennifer Lopez in a wet t-shirt should have been enough to keep me entertained.  Instead, it held pride of place as the worst film I’d ever seen—until I saw Oliver Stone’s interminable Alexander, which Dad fortunately missed.