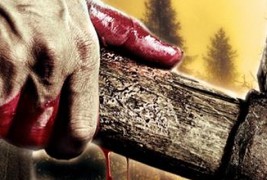 An axe in his hand, no glint in his eye

This mindless machine, he butcher, you meat!

Calm and collected, but twisted inside!

Axeman is the first modern horror movie that I have seen in quite a while (barring Oculus, which is so abnormal that it doesn’t count), so forgive me beforehand if I seem a little crotchety. In Axeman, the usual horror tropes abound, from the doomed collection of horny and inebriated young ‘uns to the folkloric serial killer who turns out to be all too real. And despite a few twists on the usual theme (a black character who makes it to the end, a lesbian couple, a fat guy with a camera), Axeman is the same old song and dance. Then again, that’s kinda the point.

Written and directed by Joston Theney (who also plays the shy tough guy Darren), Axeman is a loving nod to the 1980s and its slasher flicks. This tribute is hard to miss, from the “I Love the ‘80s” t-shirt that Liz (played by Erin Marie Hogan) sports to the Technicolor and highly unrealistic blood that the Axeman (played by former NBA player Scot Pollard) spills, Axeman is tailored to thrity-somethings who can still remember all those garish VHS covers in their hometown video stores. I was born in ’88, but even I am not immune to such nostalgia.

At its core Axeman is a simple story. The Axeman of Cutter’s Creek (which seems to be located somewhere in rural Southern California despite all the Virginia license plates that the sheriff’s deputies sport on their white SUVs) is a serial killer from an earlier era. Formerly a detective assigned to the case, the Axeman realized after murdering his wife and child that he was indeed the demon responsible for the slayings. After staring too long into the abyss and seeing his reflection, the Axeman took to the hills. 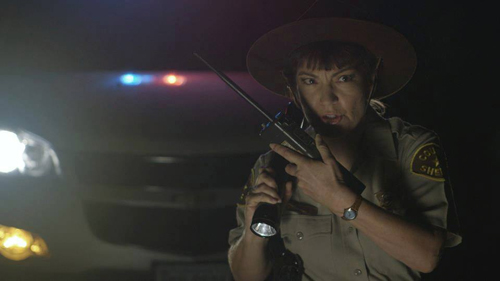 Years later, a trio of Los Angeles criminals (all of whom sport ocular modifications) pick the wrong house for their cool-off after a bank job. One by one they are dispatched by the tall, but frankly ordinary-looking killer. After the thugs are exterminated, the college students show up. Well, former college students anyway. This gang of nine contains stereotypes upon stereotypes. There’s the fat loser who gets his jollies by being frank and open about his voyeurism and his appreciation for masturbation. Then of course there’s the trio of cat-y women, none of whom seem capable of getting over their romantic hang-ups or their undergraduate drinking habits (be forewarned: there’s barely a sober moment in this film). Finally, what horror film would be complete without a misogynistic jock-type who unashamedly addresses women by calling out, “Hey, cunty.”

Basically, Axeman is full of terrible people, and as such, its intended audience doesn’t feel too bad for them when they get gutted. Surprisingly, for a killer called the Axeman, he rarely uses an axe. Mostly, the Axeman goes about his task by using several sharp implements (a knife, a machete), and often he gets creative (manually detaching a man’s brain, stabbing someone with a piece of their own spinal cord). The Axeman proves to be an effective killer, and by the film’s end, the number of dead outweighs the number of living considerably.

But, despite the Axeman’s sheer brutality and the film’s final twenty minutes, Axeman is not excessively gory nor, dare I say it, captivating. For the most part, Axeman focuses on the intimate and often confusing relationships within this gaggle of idiots. (Seriously, in the wake of Evil Dead, who is still taking a “staycation” in a cabin with a history of producing corpses?) Despite the film’s best effort, Axeman really doesn’t do a good job in making anyone care about its protagonists. The lesbian couple of Tammy (played by Jamie Bernadette) and Liz come close, but they’re so busy getting nasty all the time that they ultimately only appeal to puerile interests. The main couple, who include the lantern-jawed Brian (played by Stephen Eith) and the Russian-banged Stacy (played by Elissa Dowling), are forgettable, while the contentious duo of Cassidy (played by Chantelle Albers) and her bro-pig Doug (played convincingly by Dylan Hobbs) are just annoying. And don’t even get me started on Darren and Vivian (played by Eliza Kiss). That’s a couple capable of calling each other pussies before sharing a kiss full of each other’s vomit. Oh, how romantic! 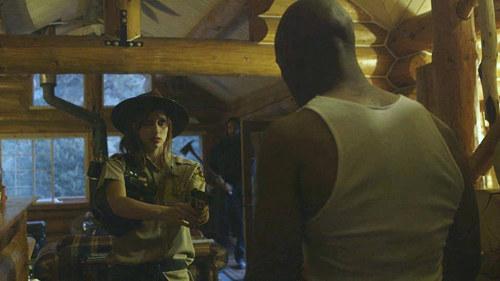 On top of this lackluster character development, the film’s subplot, which concerns the bag of money that the bank robbers left behind, does nothing and goes nowhere. The Axeman cares nothing about the filthy lucre, and the black duffel bag only means death to the person who rediscovers it. In essence, it’s a MacGuffin—a really, really trivial one.

On a technical level, Axeman is replete with cheap mistakes and fixable errors. The sound is noticeably choppy, with dialogue that is so soft that it’s inaudible and Foley effects that abruptly cut to silence right before a character starts chattering. The writing could be good in this film, but half of it is unheard, while the other half is mere sex talk. I’ll give Axeman this though: it puts real language in the mouths of its characters. The horrible people in Axeman speak and act like horrible people in the real world, and for that the film should receive a little commendation.

The other thing that Axeman does well is sincerity. This film is crass pulp and it doesn’t pretend to be anything other than that. This might be a film about a cabin in the woods, but it’s certainly not Cabin in the Woods. While Drew Goddard and Joss Whedon’s film strikes the grad school pose of patronizing irony, Axeman is dumb fun for all. Speaking honestly, it’s a mystery to me why horror fans like Cabin in the Woods. After all, while other films pay homage to the genre, it’s clear to my eyes that Cabin in the Woods hates, or at least thoroughly detests, the horror film genre. On the other hand, Theney and company are fans, and this comes through in Axeman. This appreciation keeps the film from being a complete bust, even despite the whole make-out with vomit scene.

Axeman of Cutter’s Creek is currently available as a DVD, VOD, and on iTunes, Amazon Instant, Google Play, and many more. 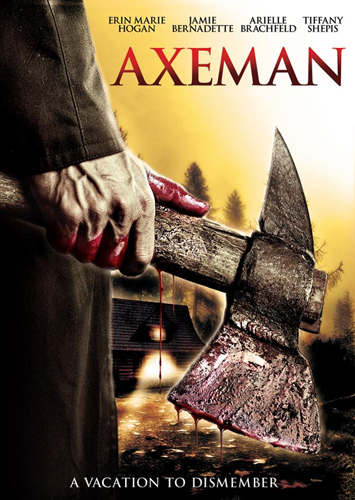