by Kalisha Buckhanon
Kalisha Buckhanon is an authoress of two novels, several articles and reviews, and even a few friends’ websites. She is not a witch, but she does keep and own cats at all times if possible. In between writing and finding ways to innocently scare herself, she finds time to curl up with Agatha Christie, Stephen King, old Alfred Hitchcock collections, H.G. Wells, Ray Bradbury, Edgar Allan Poe, Octavia Butler, and Toni Morrison (the hidden master ghost storyteller). She was born in Kankakee, Illinois, home of one of the best haunted houses and some of the best pumpkin patches in the world. She has two degrees in English Language and Literature from the University of Chicago, and her Master of Fine Arts in Creative Writing from the New School in New York City. Although she reluctantly admits it, her favorite horror film is the original Texas Chainsaw Massacre. 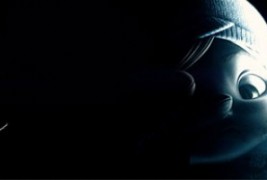 This is more of an artistic critique, over film review, so as not to distract with spoilers.

The moral in this sublime animated fable is actually a crusting of several worn, oft-spoken and trite truisms any child of the Bible belt or seasoned guru quipper knows:

“Be careful what you wish for.”

But the commonplace lesson at the heart of “Alma” does not take its shivers away.

Patience is not required.  In only 5 minutes, Disney/Pixar animator Rodrigo Blaas creates a misleadingly cheery moment, rises to a somber crescendo and leaves viewers dangling in disturbance.  This 2009 animated short from Spanish director Blaas is now a legend of industry badminton, as Blaas created the piece entirely in his own time and not under the auspices of his studio.  Several friends independently contributed the score, sound design, 3-D CGI animation, character design and editing.  Now, Alma is in development with Dreamworks as a feature-length expansion of the grim story that was an Internet sensation upon Blaas’ late 2009 limited release via Vimeo.  To date, Alma has been the 2009 winner of Best Animated Short at the Los Angeles film festival, Grand Prix Winner at the Bradford Film Festival, Fantastic Fest Special Mention, and Best Opera Prima winner at I Castelli Animati.  It has been in 2010, and still is in 2011, a contender in international film festivals from Glasgow, to Miami, to Portland, to Hong Kong.  Not bad for a freelance project first screened on Vimeo, where Blaas may have considered a final destination for a piece that ordinarily would have simply enjoyed the online viral burnout most animated shorts (and short films in general) are relegated to.

The heart of the simple story is this: Alma is a gay, carefree truant who finds that a day of footprints in the snow will eventually track her into a horrific bait and switch, literally.  She happens upon a chalkboard across the street from a presumed storefront.  She writes her name among the multiple other visitors who have done so.  As she admires her perfect cursive, viewers become aware of a doll in the storefront window.  It could nearly be a toy replica of Alma herself; it dons her same pink windbreaker, fatigue green sweater pants, gray leotard, and adorable pale blue hat.  When Alma sees it herself, she takes pause to check her own outfit in shock of such a duplicating find.  But when she attempts to enter the store and check out her new inanimate clone, its door is locked.

After a moment of frustration, where Alma scolds the store with her tossed snowball, the door magically opens.  She enters a nearly picture perfect, neat and orderly doll museum, workshop, store, or design studio; what exactly it is, and who the proprietor behind it may be, remains unnoted.  With whimsy abandon, Alma enters in order to capture and embrace her discovery of an eerie twin on prime display.  But, her twin is elusive.  The closest hint to put down the popcorn is Alma’s near-stumble over a tiny, delicate wind-up doll with a possibly miraculous accessory: a toy gentleman dressed in a dapper black suit, atop a bicycle with spinning wheels.  Alma sets the doll aright on its mysteriously wound-up apparatus, and the toy’s sharp navigation throughout the store truly tells it all. 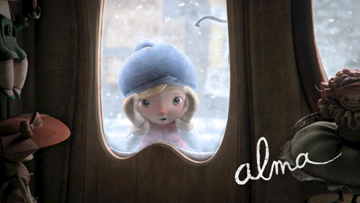 The film was screened at the 2009 Seattle Children’s Film Festival. It remains largely in the category of a children’s short, quite partially due to Blaas’ initial lack of an ominous tone. Character designer Carlos Grangle’s soporific palette of dull pastel doll outfits balances the unnamed gray and white cityscape, unlit doll house, and bittersweet mood.  Spanish composer Matretta’s delightful, chiming orchestral score of deep violins and a tinny accordion could be the soundtrack to a Ray Bradbury affair, trapping ill-fated young characters at a carnival.  French animator Bolhem Bouchiba endows Alma with a bouncy, light-footed quick step—down to her bobbing head and the ballerina posture of her flouncing arms.  No worries, for sure.  It is only until the score lapses into near-requiem, and the aural effects of Sound Designers David Hughes and Tom Meyers clutch viewers from the inside out, that we realize Alma’s jaded intent.  A single dazzling shot of the room’s expanse has a sinister, sickly source.

“Alma” is the Hungarian word for ‘apple,’ the basic forbidden fruit responsible for the downfall of man in Christian rhetoric.  In Spanish, the language of Blaas’ native land and possibly even the film’s broad setting, it is the word for ‘soul.’  The succinct, wrenching jolt of the film should lead most to know that Blaas was brilliant enough to deliberately title his short aptly. To children, their dolls certainly possess souls.  The unprecedented, meticulous designs of male and female dolls in various expressions, poses and wardrobes (with most, oddly, donning a signature hat) tells us a little about the other souls who may have journeyed there: rigid debutantes, exploratory proletariats, leisurely aristocrats, vain fashionistas, and perhaps even geishas-in-training.  There is not one viewer who won’t be provoked to recount their own idle, intrinsic, imaginative, self-possessed moments with this quintessential training tool: dolls charming an expected adult future of procreation.

Alma’s search for self-proliferation and simulation of the basic human instinct to reproduce itself leads to a greedy self-absorption, akin to a couple nearing orgasm even after it is clear that others have arrived home.  There is no stopping.  In fact, Alma’s doomed visit climaxes with the frenzied crashing of the toy cyclist into the property’s shut door, nearly exact to the awkward rhythm of an active bed with a noteworthy headboard.  Alma’s quest to possess the doll affords no interruption for her to release the foreboding cyclist, neither does she sparkle with any care or curiosity as to why that doll has not switched directions, nor does she wonder why a toy would so vigorously aim for exit.  Her singular fixation and hunt is pointed, determined, carefree and sadly optimistic. Alma’s impulsive will to possess herself, outside of herself, is a cautionary tale for us all. 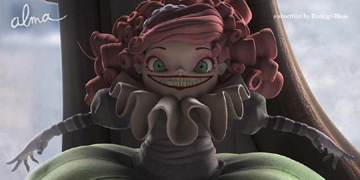 It is, of course, audience’s desire to wish for a character we can root for, see as tragic, or seek to change outcomes for; yet, it is also true that some outcomes or punishings may be deserved.  Tell-tale signs of the character precede Alma’s fate, and possibly account for her otherworldly selection into the macabre turnkey dollhouse.  The lack of dialogue or other characters prevents us from knowing what the real, true inner soul of Alma could be.  In fact, her doppelganger treat actually has a much plumper, rosier, cherubic face than its fated counterpart.  Why is Alma out alone in the first place, and could worry-sick parents be searching for her as she has snuck a moment to skip along in the snow?  Careful viewers will note a smudge of dirt on her hat: is she a child of the slums, whose desperate wish may be warranted, or is she a well-off black sheep rebel with no cause?

Before the title credit, we see that Alma does not bother to place the chalk back in its proper position on a cement ledge once she writes her name; she simply drops it to the ground with a satisfactory smile, oblivious that newly fallen or scattered snow may prevent others from tagging their names as well.  She could have been a tough and relentless softball player, given the force behind an enviable right hand throw when she aims a snowball at the store’s locked door—with a stanky “Fuck you” expression to boot.  She does not bother to crack the door for the toy cyclist.  She does not ask “Hello?” upon entering.  Presumably, she is prepared to snare the doll without purchase or permission.

In short, a fly on the wall in Alma’s home could possibly reveal that she is one difficult, defiant, self-absorbed, spoiled little lass.  Another character may have saved herself.

No matter if she was a good Everykid or bad: sitting in the corner, wearing a dunce cap, or writing lines remains the preferable forms of correction—over the possibility of this.