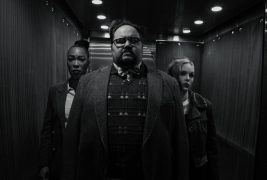 As a long-time fan of producer Bryan Enk’s work, pretty much anything he is attached to jumps to the head of my Must-See list and while The Horror at Gallery Kay slid under my radar a bit, it definitely is a film deserving of a watching.

“An estranged couple’s therapy appointment reveals the existence of a hidden world.” That’s the synopsis for this hour-plus long film and that’s about all anyone should tell you unless you want to start digging into spoilers. For the sake of a review, I’ll share some more insight, but seriously, you want to go into this film with as little information as possible. It’s for the best.

Petra and Olive are a couple who have seen and felt their relationship fracture over time and now it seems like the inevitable is staring them right in the face – Petra has become resigned to the idea of splitting up, but Olive is woefully optimistic that all they need is a little bit of help.

Enter Dr. Bozill. The therapist is an acquaintance of Petra’s, but Olive is clinging to hope that he can help reignite the flame between the two lovers. He’s got a particular set of ground rules that only add to the tension and frustration between the distant lovers, but it doesn’t take long for the film to make a hard left once Petra opens up about a chilling subway ride that seemingly opens itself up to the great void beyond.

Olive has been a bit off since she paid a visit to Gallery Kay during a mysterious private art show. It’s during the recounting of Petra’s trip and visiting the gallery itself where we see the film tug at the corners of Lovecraftian themes. 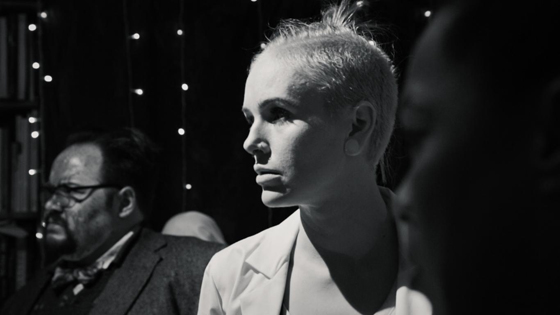 The best thing I can say about director Abe Goldfarb’s The Horror at Gallery Kay is it is a beautifully crafted film, in more ways than one, and feels like it was birthed from somewhere between Lynch and Lovecraft.

The film has social relevance at its core, considering the relationship between Petra and Olive. The desperation of Olive and the defeat of Petra are palpable. There is nothing poorly done about this film.

The acting, directing, script and cinematography are all of award-winning quality. I absolutely love a black and white film that uses color properly and this one hits that aspect out of the park, too, with the colored sequences only being employed during flashbacks. This adds to the emotional pull of the film –realizing the good days were bright and vivid while the current state of affairs is mired in tension and sadness.

The casting of Brian Silliman (Dr. Bozill), Rosebud (Olive) and Maine Anders (Petra) is a shining example of casting done properly, thus enhancing the value of an independent film ten-fold.

The Horror at Gallery Kay is a dialogue-driven slow burn that is most definitely not for all audiences. But if you like a confusing, deeply character-motored film, then this is one you will have to check out. This is an art house film, to be sure, but it isn’t self-indulgent nor does it try too hard. It’s a creepy, atmospheric haunt that’s definitely worth the trip into the void.