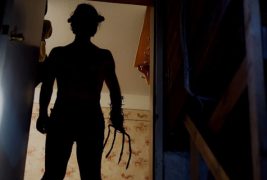 Pitchfork comes to us from the mind of first-time filmmaker/director, Glenn Douglas Packard, and was created on a shoestring budget. The film is beautifully shot, and very deservingly won an award for Best Cinematography at the 2016 Los Angeles Independent Film Festival Awards. It’s highly acclaimed by people who probably know and appreciate more than I do, as it’s also been awarded “Best Feature Film” at several recent US film fests.

However, it also has its share of negative reviews from horror fans. I guess it’s safe to say that we can add this review to that pile. Pitchfork reminds me of one of those music mashups that folks like to make these days. This one is like a big bowl of…I’ve seen this all before. In fact, I’d call it a “rehashup,” since it takes bits and pieces of iconic slasher movies and tries to mix everything up into some sort of new scary. Unfortunately, all that it winds up being mixed up into is one big mess.

Now, I can’t say that I hate this movie. I just didn’t like it as much as I thought I would, and I’m not certain that I’d watch it again. Let me break it down a little and try to explain why.

The film begins with a gorgeous shot of a picturesque countryside and fills our ears with a spooky, gothic rendition of “He’s Got the Whole World in His Hands” playing to set the atmosphere. The music ends, and we see a young woman walking down a dirt road with her dog and talking on her phone about how she can’t wait to get out of town. While she’s talking about drinking margaritas on a beach, her dog does what dogs do in these kinds of movies, and hauls off to a creepy abandoned building. Naturally, the girl follows and predictably finds her dog’s collar on the ground and hears whimpers in the background. Can we guess what happens next?  Yep, she goes and sticks her head where she shouldn’t, and we’re let in on the fact that there’s a killer on the loose. But who?! Or what?! Read on.

Anyway, upon the party van showing up in front of Hunter’s parents’ home, we see that the father isn’t exactly full of pride to see his gay son or meet his friends, except for the pretty blonde of the group. In a bit of comedic relief, the father says that it “looks like The Breakfast Club just puked on my lawn” once the passengers of the van are standing before him.  Anyway, we also meet Hunter’s doting mom and his animal-whisperer little sister, Jenny.  Once introductions are made, there’s an annoying, sped-up montage of everyone getting unpacked, settled in and helping set up for the hoedown happening later. At this point, I was hoping for mostly everyone to get slaughtered…and this is only 17 minutes in.

Hunter’s mother tries to reassure him that his small-minded father really does love him and that his family is behind him. As soon as that conversation is finished and it’s bedtime for little sis, the dance begins in the barn. OH YAY. Let me just say that no square dancing takes place. It’s more like a really shitty barn rave complete with daisy dukes and selfie sticks. This is when the slaughter SHOULD commence, but alas, it does not.

Meanwhile, back at the parents’ place, Jenny is being put to bed by Dad. Jenny reminds him that he didn’t check her closet, so he does. He tries to prank her and winds up scaring her more. She then asks him to check under the bed. Oops. Do people still fall for that?  Oh, and there’s Mom doing whatever down in the basement in the middle of the night. Lo and behold, this is where we finally get a decent look at Pitchfork (Daniel Wilkinson) as he pops up right behind her several times without her noticing until it’s too late. What we see is a shirtless guy in a furry animal mask and a pitchfork for a hand, ala Freddy Krueger. I don’t know about you, but that’s some scary shit right there.

Moving on, the film follows the typical slasher movie rules. Sex is had. People get killed. People get pissed at each other and fight. People get killed. People lose car keys. They die. Lather, rinse, repeat. At around the 50-minute mark, we finally get to learn a little about Pitchfork. There’s a teeny twist once we’re taken into where he takes his kills, and also a disturbing face-humping scene which I really could have done without seeing. Ew.

And now, we approach the end. After leaving one of his not-long-surviving friends to fight Pitchfork, Hunter and the pretty blonde from his group arrive at a house. After knocking on the door, a crazy looking guy answers and they ask for help while telling him about a man with a pitchfork hand who’s trying to kill them. The man brings them into his house where his crazy wife is, and tells her what they’ve told him. They both kind of laugh it off, and the wife starts rocking and singing the song heard at the beginning of the film. Can we see where this is going? Yep. “The pitchfork is family.”

This all being said, this movie works on a couple of levels, but not many.  The characters are the type you want to see killed immediately and as brutally as possible. Sadly, both the story and the acting just fall flat. The scares and gore are minimal at best. It’s hard to care about anyone at any point, and you can’t help but root for Pitchfork to hurry up and slaughter the lot of them so the end credits can roll. The scariest thing of all about this film is that it has all the makings of becoming a franchise. 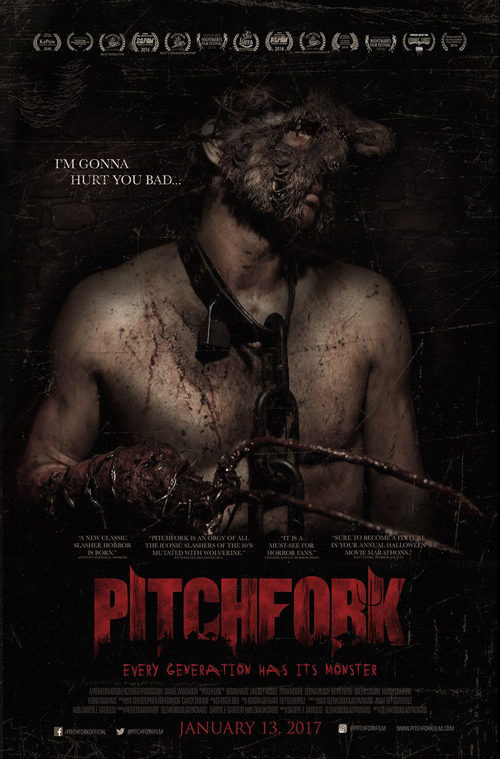