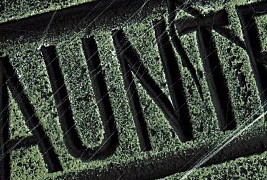 I think ghost stories are the hardest kind of horror to write.  I love body horror, but it’s easier; a disease that causes you to sprout hands in random places, a woman with shark heads instead of breasts. . . .Sure it’s creepy, but there’s something a little Mr. Potato Head about it: stick enough body parts where they don’t belong and you’ve got instant scariness.  A really good ghost story requires patience, atmosphere, and most of all pacing.  The best ghost stories infuse mundane imagery with terrifying implication.  The mundane trappings have changed–EVP and Polaroids replaced spirit writing and séances–but the would-be ghost story writer still has to take an old house or graveyard or ship and a dead guy who won’t suck your blood or eat your brains and imbue them with netherworldly horror.

FR Press’s Haunted, edited by Monica Valentinelli, is an anthology of eleven stories concerning ghost hunters.  Ghost hunting isn’t a new idea (William Hope Hodgson’s Carnacki was ferreting out the supernatural back before World War I) but in this era of Jason Hawes and Grant Wilson,[1] our idea of the ghost hunter has probably changed even more than our image of his quarry.  I have to confess I’m not much drawn to the veneer of pseudo-science overlaying ghost hunting today, so I’m probably a more finicky critic than your average horror fan would be.  That said, I’m happy to say that Haunted by and large works well–in spots brilliantly so.

The volume starts with an introduction by Jason K. Jrakman, a Wisconsin-based ghost hunter who gives a rundown of the history of his art (profession? hobby?).  While I don’t know that I entirely believe there’s such a thing as “scientific” ghost hunting,[2] as Jrakman says he prefers, his introduction provides a nice description of the modern ghost hunting phenomenon, its background and methodology.

The anthology opens with Alex Bledsoe’s “What’s the Frequency, Francis?” in which a reality show ghost hunter discovers a 1922 manuscript by a Harry Price-like[3] paranormal investigator (the titular Sir Francis Colby) and the remains of a radio that can supposedly contact the dead.  The radio idea is an interesting one, but Colby’s adventures, for all we’re told they take place in the Jazz Age, lack enough period detail to be truly convincing.

Next comes Jess Hartley’s “Immaterial Witness,” concerning a psychic ghost tour guide and the shock jock host of a paranormal radio show who invents a machine for trapping ghosts.  The story ends too abruptly to really make good use of its intriguing set-up, which is a shame because I found myself curious to know more.  How does the ghost-trapper work, exactly, and what sort of program would result if Howard Stern catered to the parapsychology crowd?  There’s a meaty story here, but we get only a taste.

Jason Sizemore’s “Useless Creek” is one of the collection’s highlights.  The story of a widower professor and a mysterious vagrant who claims to know the location of the professor’s missing wife, “Useless Creek” has all the implied menace and sense of deep history that a ghost story should, plus the characterization generally missing from shorter horror pieces.

“A Quiet House in the Country,” by Bill Bodden, is a nice piece about a haunted house in the Wisconsin woods.  It’s an archetypal set-up–ghost hunters go into a spooky old mansion and encounter an evil presence–but it’s done well, with an atmosphere rare in haunted house pieces.

Chuck Wendig’s “We Need Johnny” is another strong entry about a group of dysfunctional ghost hunters who decide to take a more proactive approach towards the question of ghostly origins.  Wendig tells his story in an interestingly non-linear fashion, with understated but powerful imagery.

Nancy O. Greene’s “After Life” probably disappointed me most.  Once again we get a group of amateur ghost hunters in a decrepit old house–in this case, the former dwelling of a serial killer.  This is a wonderfully frightening set-up, and when the viewpoint character dies halfway through the story (but continues narrating), it’s a great and unexpected twist, but Greene spends too little time on background (the serial killer is just called “Old-Day Man” because he lived in the “old days”) and the protagonist’s tone is too smart-alecky to really support the atmosphere.  I can only hope that Greene will revisit this basically good idea in a longer and more thoroughly imagined form.

Jason L. Blair’s “It Happened In the Woods At Night” is a very creepy piece about two men in a state park after closing hours, looking for the grave of a boy sanctified to the powers of darkness.  In addition to its eerie wilderness setting, Blair’s story has two of the most frightening ghosts in the anthology.

“Missing Molly” by Alana Joli Abbott pairs a recently-discharged veteran of Afghanistan-turned-medical student and a technician/ghost hunter working for a pharmaceutical company that hopes to use ectoplasm as a cure for PTSD (!) in a clever riff on Sherlock Holmes and Dr. Watson.  Abbott’s sensitive portrayal of the soldier’s state of mind admirably avoids both “psychotic veteran” and “American hero” clichés in favor of genuine character development well-served by the author’s command of dialogue.

Preston DuBose’s “The Angry Stick” ends the collection.  DuBose does a good job creating a convincing setting (a small-town Texas pool hall haunted by a ghostly woman who preys on men every seven years) but rushes the story’s ending, making for a confusing denouement.

But wait, Savage Readers–that’s only nine stories.  I saved the best two for last.  Georgia Beaverson’s “Ghost Catcher” is about Alex, a psychic boy whose cash-hungry single mom advertises his ghost hunting services on Craig’s List for unseemly characters like Wesley, who has a dark secret involving a female ghost and a deep lake.  Beaverson’s tale is a traditional ghost story that showcases the best aspects of the form: solid atmosphere and strongly drawn characters against a backdrop of richly-conveyed supernatural horror.  With its single mother and psychic boy, “Ghost Catcher” reminds me favorably of an epilogue to The Shining.  Not as hopeful as King’s ending, perhaps, but disturbing and lonely and realistic.

Richard Dansky’s “The Man Who Built Haunted Houses” is just awesome.  A ghost-hunting agent of the Devil (surely one of the neatest takes on the concept I’ve seen in a long time) seeks out a carpenter known for his ability to build haunted houses from scratch–no brutal murders or Indian burial grounds required.  The carpenter, as it turns out, has discovered a way to dig postholes to Hell that imbue the lumber he uses with lost souls.  Dansky gives us not only a truly original take on the haunted house idea, but tells the story in an impressively authentic folksy voice that gives it the feel of a backwoods tall tale–but much scarier.

Taken as a whole, Haunted works well, and Valentinelli has done a good job selecting a range of stories that are different enough from each other that none feel like filler–an especially impressive feat in a theme anthology.  Haunted’s greatest editorial sin, however, is its large number of typos: nothing so bad that it destroys the reading experience, but also nothing that couldn’t have been caught on one last read-through.  Proofreading isn’t a very sexy part of the writing process, but I think a volume as otherwise competent and entertaining as Haunted deserves to look its cleanest and read as smoothly as possible.

It’s commonly said that those who can do, and those who can’t teach.  My Dad, wisely, I think, amends this with, “and those who really can’t become critics.”  It’s easy for me to snipe at the uneven spots in Haunted, but the fact is that I haven’t tried to write a ghost story in ten years.[4]  Each and every one of these authors, whether I personally enjoyed their stories (as I did quite a few) or not, tried their hands at writing one of the hardest kinds of horror stories.  Impressively, there are enough successes in Haunted for me to recommend it and to say that I hope to see more anthologies from Monica Valentinelli and FR Press as generally well done as this one.

[1] On the off-chance that you’ve been living under a toppled headstone for the last decade, these are the founders of The Atlantic Paranormal Society, subject of the reality show Ghost Hunters.

[2] I’m not a hardcore skeptic on things like cryptozoology and the paranormal, and I don’t think guys like Jrakman are hucksters or idiots.  But I’m also not sure I really think EVP and orb photographs are any more scientific than tea leaves and “knock once for ‘yes,’ knock twice for ‘no.'”

[3] Harry Price (1881-1948), was a one-man Jason and Grant before Jason and Grant were anonymous gametes swimming in their respective daddies’ ectoplasm.  One of the first celebrity paranormal investigators, Price helped shape much of the twentieth century’s approach to the paranormal.

[4] My last attempt had a scene where a spirit tried to staunch his eternal machine gun wounds with tampons.  Seriously.