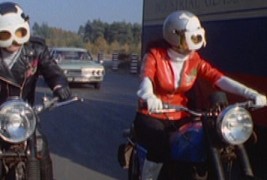 And why is that? Well, before Elvis the Pelvis gyrated in front of American television screens and before Chuck Berry’s duck’s ass pompadour did the duck walk across American stages, horror films were mostly cozy entities that borrowed more than a little from their brother genre—the mystery film. Indeed, if one were to peruse through most of the horror films from the 1930s and 1940s, then one could easily discern the simple fact that they were primarily Gothic mysteries that only lacked the pure mystery’s requisite detective. Before that, during the silent era, horror films were even more mixed, with some being semi-comic and others being darkened art films (Roland West’s The Monster versus F.W. Murnau’s Nosferatu).

All of this changed during with the coming of the postwar generation. With easy access to automobiles and disposable income, the teenagers of the Eisenhower administration made horror movies into the voices of their open rebellion. While big bug sci-fi flicks spoke to the collective unease over the international nuclear arms race, films such as I Was a Teenage Werewolf (1957) and I Was a Teenage Frankenstein (1957) chronicled the horrific stress that comes with puberty and living in the Petri dish known as high school. Couple this with the rebel-worshipping at the heart of The Wild One (1953), then you have a hazy outline of how and why the young ‘uns of the 1950s injected a little bit of danger into the otherwise muted world of the fright film.

While the first generation of rock and roll gave horror films a new level of cool viciousness, it was the acid-taking ‘60s and the heavy metal ‘70s that increased the volume in terms of gore, sex, and outright ridiculousness. In some ways, this all gathered together for one big laugh. Today, the more outlandish horror films of the Vietnam era come across as silly, if not downright buffoonish. On the other hand, given the fact that an unprecedented American crime wave began in the early part of the 1960s and that the originally harmless explorations of the hippies lead to such things as the Manson Family, the Weather Underground, and earnest interests in Luciferianism, then the Satanic and sex-obsessed films of this era take on a darker hue.

1973’s Psychomania, which was also released as The Death Wheelers, sits in a position which connects both the teenage horror films of the 1950s and the darker, more occult-themed films of the 1960s and early 1970s. Directed by horror veteran Don Sharp, Psychomania is an undeniably British film that exudes all the gloomy, fog-shrouded, and earth-toned character of that fine country. Swimming in a pool of blue and green colors, Psychomania has the cinematography of a family movie shot underneath a pond. Frankly, this low-fi quality gives this horror film its charm, for besides its wacky plot and unrealistic characters, nothing else does.

In a nutshell, Psychomania deals with a motorcycle gang called The Living Dead. Besides riding around a stone circle called “The Seven Witches” (which exists because, according to legend, some ye old witches were guilty of a magical misdemeanor, and thus were turned into gray slabs), The Living Dead are also fond of black magic and terrifying the locals in the nearby town. Their leader is the cocksure Tom Latham (played by Nicky Henson), a sociopath in a black leather jacket. The meanness of the group is displayed early on in the film, when, after an unwitting motorist drives through the gang in formation, Latham and his gal pal Abby (played by Mary Larkin) decide to put their customized skull helmets to good use as they once again frighten the beejeezus out of the same driver, who this time winds up sleeping outside of his own broken windshield.

Like a lot of couples, Tom and Abby celebrate their victory by trying to shag in a graveyard. Tom pulls out of the make-out session early on in order to capture a rare graveyard frog. Obviously miffed, Abby tells Tom that she sometimes questions his humanity. Tom, after successfully corralling his “little green friend,” suggests to Abby a suicide pact with the expressed purpose of “crossing over” to the other side of existence. Abby brushes his requests aside, even though Tom promises that they would come back to the world as even better entities. This throwaway line is essentially the “So What?” of Psychomania: Tom, using the powers of supernatural darkness and pure will, returns to life after driving his motorcycle off a bridge.

Tom’s awesome return (which involves him driving his motorcycle out of his own grave), along with his assurances that nothing can harm the already dead, convince the other members of The Living Dead to off themselves as well. This decision sends Psychomania plummeting into one gratuitous scene of one self-inflicted death after another. First, Jane (played by Ann Michelle), the wickedly childish second-in-command, drives her motorcycle into the side of a moving van. Then, one by the one the rest of The Living Dead get more inventive with their suicides. One member dons a black speedo and some heavy chains and throws himself into the river. Another gang member leaps out of his apartment to the awaiting pavement below. Not to be outdone, yet another member jumps to his death, but this time around it’s a plane instead of an apartment complex. Finally, the ginger tough guy Hatchet (played by Denis Gilmore) takes off from a bridge into oncoming traffic.

These suicide scenes take up a sizable portion of the film, with another chunk belonging to the scenes in which The Living Dead, now firmly living up to their nickname, rack up a large body count after causing accidents, rampaging through jails and supermarkets, and, in one cringe-worthy scene, ride their motorcycles through a baby carriage with a little body inside. Beyond these scenes, a convoluted plot involving Abby’s unwillingness to die, a police investigation, and a Satanic duo permeate the periphery. The Satanic duo, which is made of up of Tom’s mother (played by Beryl Reid) and her menacing butler Shadwell (played by George Sanders, who committed suicide not long after shooting of the film was completed), are the ones who at first facilitate Tom’s quest for immortality, then terminate it during an uncomfortably long suicide scene of their own.

By the film’s end, a sensible viewer will be left with numerous questions. After all, what do frogs, an empty room in the Latham mansion that provides flashbacks, and stone circles have to do with a devilish gang of bikers? While some of these questions are answered in the film, Psychomania is mostly a head-scratcher that provides only the most minimal context at any given time. From the very beginning, Tom wants to die and come back, while his mother and Shadwell want to both keep practicing their black magic while at the same time limit Tom’s exposure to said arts. Sounds confusing? Well, it is. The truth is that Psychomania is a cult classic because of its campy inconsequentialism. Since it doesn’t logically make much sense, Psychomania must rely on its fuzz rock soundtrack and its aura of counter-cultural cool. Some could label it as a scheme to cash in on post-Summer of Love bitterness, but Tom’s frequent anti-authority comments somehow feel genuine rather than stereotypical. Beyond that, the film’s cheap quality and low-fi ambiance lends it an air of underground cool that cannot be easily recreated today.

This view of the film is of course a recent phenomenon. When it was released, it was widely scorned as yet another piece of culture trash that paid lip service to the era’s Satanic panic.[1]

Worse still, a film critic for the London Times declared Psychomania only fit to be shown at an “S.S. reunion party.” Still, despite these negative opinions (or maybe because of them), today’s horror movie heads have a lot of good things to say about Psychomania, a film that manages to tie together criminal motorcycle gangs, rock and roll, rebellion, black magic, and a Thelema-influenced view of human will.[2] While many horror film fans may not listen to or even like rock and roll, the boisterous quality of that music has unquestionably influenced most post-1950s horror films. In this history, Psychomania sits pretty as an uncouth and disorientating piece of garage rock horror gold.

[1] It should be noted that Psychomania came out during a time when Satanism-themed films were both popular and widespread. Before this, a few fiction writers in the horror genre explored the connections between teenage rebellion and dark magic, with Robert Bloch’s 1958 short story “Spawn of the Dark One” being a prime example. Interestingly, Bloch’s short story and Sharp’s film share a lot in common

[2] Thelema, the religion founded by British occultist Aleister Crowley, has as its supreme law the dictate “Do What Thou Wilt.”

One thought on “The Psychotic Glee of PSYCHOMANIA”