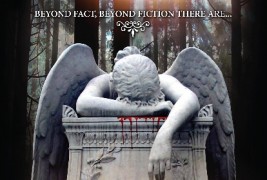 The first season will kick off this Halloween with a lighter tale entitled Lolli Girl that follows the misadventures of a young homeless British girl as she falls prey to the dangers of the street.

The tales will get darker as the series moves forward.  Open Call, this season’s second episode, follows struggling actress, Mary David who yearns to be more than just an average housewife.  Things suddenly shift into high gear when she is offered the role of a lifetime.

The third episode, Truth, Justice and the American Way finds Father Peter questioning his beliefs and values after he causes the tragic death of a young woman and is abducted by her lover.

GeoKilling rounds out the first season.  A group of friends hike into the woods on a geocaching excursion.  The treasure they discover at the end of their quest will change their lives forever.

All episodes will be available on the Light & Dark Productions website as well as VIMEO and other platforms to be announced.

Beyond fact, beyond fiction there are TALES OF LIGHT & DARK.  For more information about the series including photos and videos from upcoming episodes, visit www.lightanddark.net/tales.htm.

Tales of Light & Dark Trailer from Glen Baisley on Vimeo.