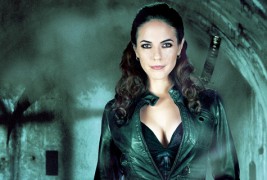 The fourth season of the hit supernatural series Lost Girl will premiere in Canada this fall and air in the U.S. on SyFy in early 2014.  This season promises guest spots by several genre stalwarts, past and present.  To find out more, read the press release below!

TORONTO, September 23, 2013 – Prodigy Pictures, in association with Shaw Media, is thrilled to announce that the supernatural Canadian hit series, Lost Girl adds Kyle Schmid (Copper, Being Human) and Linda Hamilton to its season four roster of guest stars. Featuring 13 hour-long episodes, season four premieres November 10 at 10 p.m. ET/PT exclusively on Showcase in Canada and will be shown on SyFy in the U.S. beginning in January 2014.

Schmid, who will have a multi-episode story arc in Lost Girl, can currently be seen on the second season of Showcase’s Copper as Robert Morehouse, in Being Human as Henry Durham, and may be best known for his starring role in Blood Ties as vampire Henry Fitzroy. On the big screen he starred in Dark Hearts, The Sisterhood of the Traveling Pants, David Cronenberg’s A History of Violence, Zerophilia, Adam Shankman’s The Pacifier with Vin Diesel, The Covenant, Joy Ride 2: Dead Ahead and Dead Before Dawn 3D.

Linda Hamilton will reprise her role as Acacia, a tough, sexy and ruthless assassin who has enjoyed a storied and deadly career. Hamilton is best known for her portrayal of Sarah Connor in The Terminator and its sequel Terminator 2: Judgment Day and Catherine Chandler in the 1987–1990 television series Beauty and the Beast, for which she was nominated for two Golden Globe® awards and an Emmy®. Her other notable credits include the comedy flick Mr. Destiny, the disaster film Dante’s Peak and a recurring role on the television series, Chuck.

In the upcoming season of Lost Girl, fate casts a wide shadow over the Fae world. With Bo’s (Anna Silk) return, we see the lines between Dark and Light fae blurred causing Bo to venture into a journey of discovery. Bo and company will ultimately realize that regardless of the challenges and enemies they face, they’re stronger when they face them together.

Lost Girl was developed by Prodigy Pictures, in association with Shaw Media and Showcase. Executive Producers are Jay Firestone and Emily Andras. Vanessa Piazza and Wendy Grean are Producers.