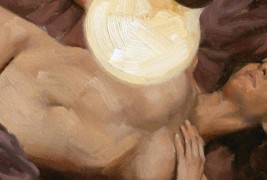 Ed McBain, real name Salvatore Lombino, burst onto the crime fiction scene in 1956 with Cop Hater, not only one of the best titled books in history, but also one of the most unique. Rather than one detective, McBain gave his crime novels a whole precinct—the 87th Precinct, to be exact. As the prince of the police procedural, McBain helped to not only kill off the remaining Golden Age deadwood, but he also gave professional cops the limelight instead of the amateurs. From the dark forests of Scandinavia to the sun-kissed streets of Italy, the police procedural dominates everywhere you look. Love it or hate it, it all goes back to McBain.

Unbeknownst to many, McBain wasn’t always so focused on the boys in the blue. In the early ‘50s, McBain not only wrote books for kids under the name Richard Marsten, but he also churned out pitch-black noir novels under the nome de plume Evan Hunter. In his Hunter novels, McBain sank below the depths of everyday life in order to present a truly treacherous street jungle of junkies, chorus girls, and beatnik sociopaths. So Nude, So Dead, which was first published as The Evil Sleep! under the Hunter byline, then republished again in 1956 as So Nude, So Dead with the Marsten name, is one such novel.

Reprinted for the first time in almost sixty years by Hard Case Crime, So Nude, So Dead tells the sorry story of Ray Stone, a former piano prodigy and hepcat who got hooked up on horse and never looked back. Stone’s addiction to heroin gives So Nude, So Dead a feverish quality, as readers tag along with the sweating, shaking Stone as he looks for his next serious fix. The problem is that Stone has a lot more to worry about than just smack. After tripping the light fantastic (that would mean “dorking” in The Monster Squad sense) with the beautiful jazz singer Eileen Chambers, who just so happens to be sitting on sixteen ounces of heroin, Stone wakes up to find some small, red holes in Eileen’s belly, which until then was carrying a living baby. She’s dead, which means that the entire city of Gotham is out for this piano player-turned-hophead.

For almost two hundred pages, So Nude, So Dead moves like a bullet train through the New York gutter. McBain slows down every once and a while so we can see the wildlife:

The neon flickers leaped into life, shouting their wares to Broadway. And the people began to come out of their holes, pleasure seekers, curious, indifferent, interested, bored. Men in shirt sleeves, and girls in light cotton dresses. Sailors in tight whites and titled hats, popcorn vendors, floozies, be-boppers with beards and berets, a blind man with a dog and an accordion, and a drunken woman with sagging stockings and hennaed hair lying in the doorway of a photographer’s shop.

It ain’t exactly Fellini’s Satyricon, but McBain’s New York does seem like a great city in steep decline. With the police after him, it’s up to Stone, who pretends to be both a detective and a journalist in order to get some answers out of the players involved, to piece the case together. His suspects are a buxom singer (Babs), a red-headed Chinese stripper (Rusty O’Donnell), a wealthy playboy who dabbles in international heroin smuggling (Tony Sanders), a pusher (Charlie Massine), and a couple of musicians (Scat Lewis and Dale Kramer). In other words, the real lowlifes of Eisenhower’s America. Sure, Stone is the innocent party, but there’s something to be said for chucking the whole lot of them into the East Bay with concrete shoes.

A crime novel involving a piano player fallen from grace immediately brings to mind David Goodis’s novel Down There, which became François Truffaut’s film Shoot the Piano Player (Tirez sur le pianiste) in 1960. Funny thing is, Goodis published his novel in ’56, the same year that The Evil Sleep! became So Nude, So Dead. Maybe piano players on the skids was fashionable back then, but it is highly interesting that two gentlemen doing the same gig came up with similar ideas. Look at me now, stirring the pot.

Whether or not Evan Hunter was Goodis’s secret muse, the fact remains that So Nude, So Dead is tough-as-cheap-steak noir that goes down quick. McBain’s writing is sharp and concise, plus his junkie hero is a believable loser. The only thing that’s questionable is the fact that Stone, who spends most of the novel as a pale-faced wreck with black shoe polish oozing out of his naturally blond hair, never seems to have a problem bedding down with beautiful women. They all know he’s a hophead wanted for murder, but the guy has some game. Maybe the trick to your next fling is to put on the scent of desperation and make like you’re going to rob the lucky lady for your next cap of H. Whatever happens, don’t blame McBain and don’t call me for bail. 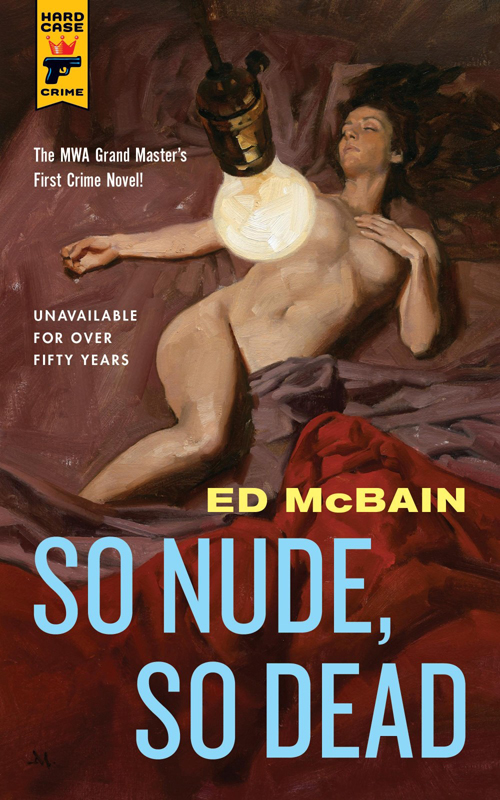