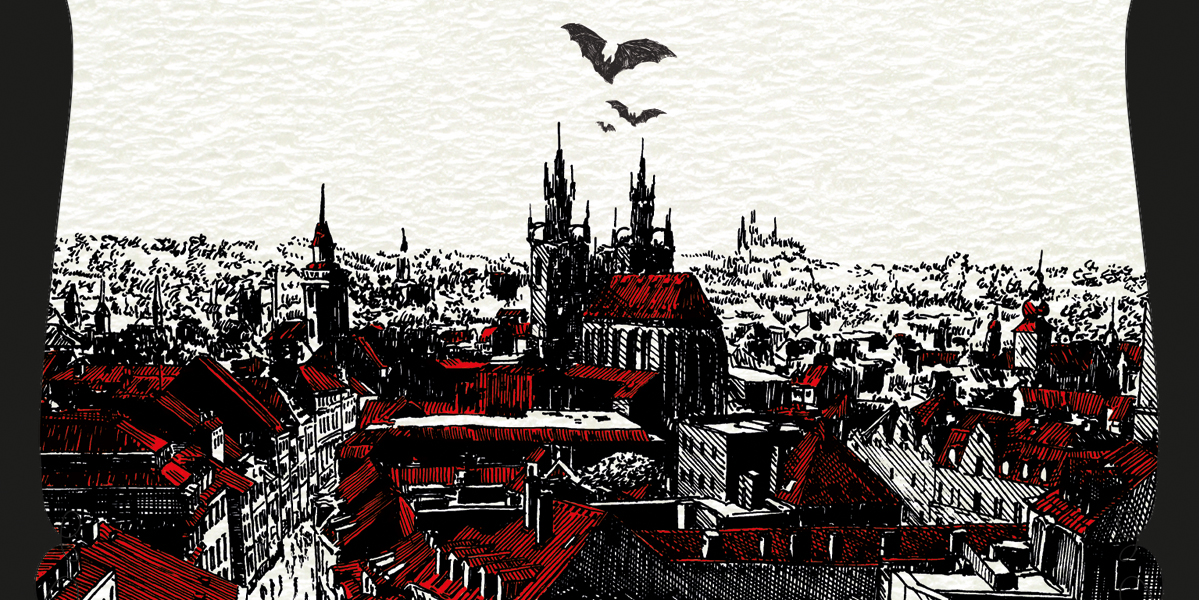 Despite my overwhelming desire to visit macabre places around the globe, I have yet to step foot in the magical city of Prague. When it comes to European locations steeped in mysticism and ghostly lore, few can be mentioned in the same breath as this ancient city of the Czech Republic. The Golem once tread the Jewish ghetto here and alchemists, warlocks and occultists have flocked to the city for centuries. While it is now a vibrant, modern city, the past still lingers here, and many notorious locations can still be visited.

Sure sounds like a great locale for a horror novel, doesn’t it? Author Nicole Jarvis agrees and has made the city almost a central character in her new novel The Lights of Prague. Her version of Prague is a dangerous, haunted place, but one well worth visiting. After you’re done with The Lights of Prague, you’ll actually feel like you’ve been to Kampa Island, stood in the shadows of Tyn Cathedral and crossed the Charles Bridge which stands over the dark waters of Vlatava River. Jarvis’ painstaking descriptions of 19th century Prague add a lot of authenticity to the novel and could almost function as a guide to the legendary town.

The Lights of Prague is a great Gothic horror full of action and adventure. It’s not really the kind of horror novel full of gore and revulsion, but more of a blood and thunder adventure that happens to feature vampires, ghosts, and other denizens of the night. It would make a great movie. As I read it, I could almost see the film in my mind. Who would play the characters of Domek, Ora and Czernin? I’ll let you use your own imaginations to fill those roles…

One thing I really like about the novel is that it is absolutely self-contained. Mercifully, this is not something needlessly dragged out into a trilogy or…God forbid…even more volumes. This story has a beginning, a middle, and a definite end. Will we see more of Domek, Ora, and the Lamplighters? I hope so! There’s a lot of room for their adventures to continue.

In addition to being an adventure with plenty of horror overtones, The Lights of Prague also has something to say about the conflict between rich and poor, privileged and underdogs, and the inequalities of society, both human and vampire. It’s a tale of how simple human decency can defeat the darkest of impulses…although not without cost.

The tale takes place in mid-19th century Prague, a time of change in the old city. One of the changes is the coming of gaslight to the dark and dangerous streets. For the first time, powerful lamps cast a constant glow in the formerly pitch black streets. Working to keep the new gas lamps lit is a union of working-class men known as the Lamplighters. But the Lamplighters hold back the night in more ways than just igniting a lamp. They are a brotherhood dedicated to fighting the supernatural monsters that prowl the darkness.

One of the Lamplighters is the story’s hero, Domek Myska. Domek is a humble, scrupulously honest fellow who takes his job very seriously. He’s still devoted to his mother, a fortuneteller who uses Tarot cards, and helps out around his uncle’s watch shop. He’s shy around women and loves opera music. But when it comes to fighting monsters, he’s a fierce warrior motivated by a terrible incident in his childhood.

The monsters haunting Prague are a varied lot. In the dark waters of the Vlatava River and its tributaries lurk the vodniks—evil beast-like creatures of the deep. In places where the darkness is deepest and the lights of the gas lamps don’t reach reside the bubaks, living pools of black energy that feed on fear. Ghosts also stalk the streets of Prague. Many are harmless, but some are very powerful and malevolent. There are also evil humans…occultists and dark alchemists, as well as the more typical thieves and murderers.

But the greatest threat of all is the pijavice…vampires! These bloodlusting undead come in many shapes and forms, from almost bestial inhabitants of the catacombs to powerful and rich pijavice who are protected by privilege. The Lamplighters spend much of their time waging a secret battle with the vampires for control of Prague.

One night, Domek encounters a strange vampire who is hellbent on protecting a jar he is carrying. After a pitched battle, Domek finally destroys the vampire and opens the jar…only to find that it contains a will o’ the wisp. A powerful ghostly spirit in the shape of a glowing orb, this wisp is bound to whomever controls the jar. That means Domek is now the master of Kaja, the wisp…a creature of immense power.

This creates a moral dilemma for Domek. Should he turn Kaja over to Paluska, the stern leader of the Lamplighters? With the power of the wisp on their side, the Lamplighters can win great victories against the monsters of Prague. But good-hearted Domek feels that perhaps he should also free Kaja from a life of slavery.

There’s more to the situation. While battling the vampire, Domek also encounters the White Lady, an immensely powerful ghost known to haunt the Royal Castle. She has never been seen outside the Castle grounds…until that night. What is her connection to the wisp? And if that’s not enough, Domek finds that the apartment he shares with roommate and fellow Lamplighter Anton has been ransacked. Somebody is already looking for the magic jar.

The other major character in the story is Lady Ora Fischerova, who couldn’t be more different from Domek. Where he lives in humble surroundings, she is rich. Where Domek’s life revolves around work and survival, Ora spends her time at fancy parties, operas, and art exhibits. And while Domek is a human being, Ora is a vampire. She is hundreds of years old with a complex past including a human husband now deceased.

Ora is determined to deny the darker side of her vampiric nature. She drinks animal blood only and avoids preying on humans. In fact, most of her friends are human and fully aware of what she is. These friends include Sokol and Valka, two government agents attached to a group dedicated to fighting pijavice. Ora has become something of a collaborator with them, giving them insight on vampire culture and helping them against the worst.

Ora is something of a tragic character. A witty party girl on the surface, she’s wracked by guilt and constantly at war with her dark side. Other vampires detest her, and she still has to take pains to conceal her true nature from the humans she longs to join.

She has now become aware of something strange going on in Prague’s pijavice underground. Some vampires are beginning to boast that they are “cured.” This means they can operate in broad daylight and have become immune to hawthorn wood, which otherwise is a deadly bane to them. A new faction of vampires seems to be taking over. If they can really find a cure, they will be a danger to the whole human race. At the urging of Sokol, Ora goes undercover to try and find out more of what’s going on.

As you might expect, Domek and Ora meet and are instantly attracted to each other. The sworn vampire killer becomes smitten with the reluctant vampire lady even as he struggles to figure out how to handle the powerful spirit he controls.

From there, their relationship takes a lot of twists and turns, many of them disastrous. They both become aware of a great vampire conspiracy that is capturing wisps from all over Europe and using them to change the balance of power. There are also elements of the Lamplighters who want to use Kaja’s power to destroy all vampires, including Ora. The Czech government also seems to be deeply involved in all the subterfuge. Domek and Ora discover they can trust nobody…not even each other.

It ends in a wild blood and thunder climax as all the various factions collide and a lot of secrets are revealed. I can honestly say that I could see some of the surprises coming, but this didn’t affect my enjoyment of the story at all. The Lights of Prague is paced really well and when the action starts to flag a bit for some romance, it will soon reignite even hotter than before.

Despite all the action and monsters, there’s always a focus on character. Domek is a great hero because he’s such an honest and decent guy, yet that honesty is a torment to him and causes a lot of problems. Ora is much more cynical and world-wearier, but with a desperate desire to experience the humanity she lost centuries ago. Another intriguing relationship is the one that develops between Domek and Kaja. The wisp is quite articulate and very tricky to deal with. At first, he despises his new master Domek, but as the novel moves along, the two learn how to work together. The resolution to Kaja’s story is very satisfying and is linked to the ghostly White Lady.

Side characters are also well developed. There’s the mysterious Bazil, a player in both the vampire and human criminal underground. What part does he play, and can he be trusted? You won’t know until almost the last page of the book. We also get introduced to the scary Lord Czernin, the ancient vampire overlord who lives in his old castle far in the country. He was Ora’s master for a long time until she broke away from him. I get the feeling that author Jarvis really wanted this character to be Dracula but couldn’t pull the trigger. Czernin is a master plotter, but he is wildly out of touch with the rapidly changing world of the 19th century.

The maze of characters and their interaction rivals the twisting alleys of Prague itself. Plenty of darkness but there’s always light on the other side of it. This is a fun, cinematic adventure with plenty of horror and history…I look forward to a sequel! 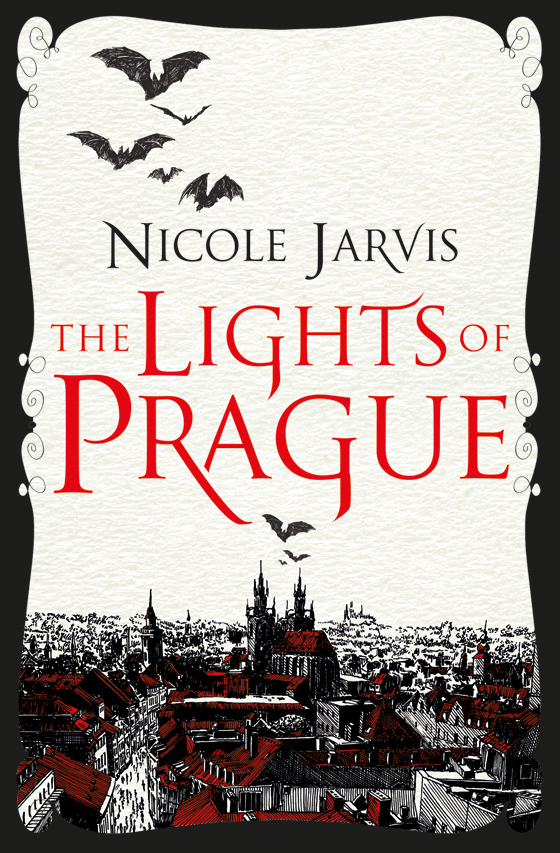