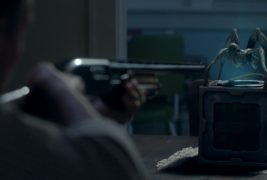 Gremlin, written and directed by Ryan Bellgardt, is a creature feature with a twist.

Adam Thatcher (played by Adam Hampton) is a disgruntled father of two, suffering in his marriage and struggling to connect with his teenage daughter. Things go from bad to worse for the family when he becomes the recipient of a strange gift: A box he cannot open, fitted with a dial that counts down days.

The box must be given away to someone you love before the timer runs out, and the answer why is soon discovered. Inside the box is a creature, a sort of insectile monster with a taste for blood and carnage. If you don’t get rid of the box, the creature will systematically kill everyone that you care about; if you do get rid of the box, you only manage to pass the curse along to someone else you love.

The story suffers from some near-fatal pacing errors, which unfortunately strip much of the suspense and tension from the narrative. However, there are still places where the story shines: the awkward and utterly authentic relationship of the teenage daughter and her boyfriend; the heartbreaking downward spiral of the wife (Kristy k. Boone) as grief drives her over the edge; the determined police officer who recognizes that he’s in over his head with an investigation that’s not adding up.  In turns shocking and heartfelt, violent and darkly funny, Gremlin is a rollercoaster of emotion.

Adam’s character arc is ultimately one of attempted redemption and self-sacrifice, as one might expect from the setup. He struggles with matters of loyalty and overcoming the traumas of his past that have affected his marriage and relationship with his family. This wasn’t as fleshed out as I would have liked to see – there were loose ends regarding his backstory that I would have preferred to see resolved – but Hampton succeeds wonderfully in portraying a complex, sympathetic yet at times reprehensible character.

The biggest strength of Gremlin, and the thing that deserves the most praise, is the quality of its visual effects. The creature is masterfully rendered and has smoother, more realistic CGI than I’ve seen in some big-name Hollywood movies. It’s a degree of polish that sets it apart from other indie productions, and I’m eager to see what other creature features could be produced by this same team.