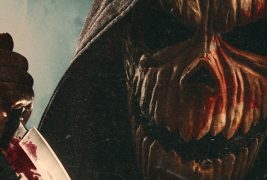 Call me crazy, but when I saw a trailer for a film that seemed to be about the origin of a new urban legend and a creepy clown, I got excited. Sure, the idea is one that has been done to death, but I’m always hopeful that a new take on it will rise from the ashes and blow me away. Well, once again, my optimism wound up getting slammed face-down in the shitter. You’d think I’d have learned my lesson by now, right? Yeah, me too. Anyway, stick with me as I tell you a little about a tale brought to us by the writing team of Jen Mathiasen and Ryan McGonagle and director Anthony Hall called The Legend of Fall Creek.

Starting out, The Legend of Fall Creek feels the need to educate us by giving us a definition of “grindhouse.” I personally found this amusing since most horror fans are very well aware of what the term means. Their definition prepared me for what I was getting ready to watch since it basically warned that good acting and an understandable plot were being replaced by gore, sex and other “shocking” themes. Well, hell yeah!

Once the schooling session fades, we’re read the backstory. Essentially, a young boy named Robert Maxwell attended a classmate’s Halloween party around 20 years ago where he was bullied into having a panic attack which was accompanied by a nosebleed. Naturally, a group of several asshole kids chased poor Bobby out of the house and down the road into a wooded area called Devil’s Den, and guess what? The group of kids returned to the party, but not Bobby. He was never found. Folks claimed that they saw his ghost walking along the road on Halloween night, wearing his costume and leaving a trail of blood from his nose. Thus, the legend of Bloody Bobby is born. Scared yet? Wait.

Essentially, The Legend of Fall Creek is one of those movies where something bad happens in a small town. Everyone knows everyone else and they all remember what happened, but no one really talks about it unless it’s brought up, like a dirty little secret. Anyway, our main characters of the story are an awkward fella by the name of Reggie (Curt Clendenin), his cousin Tiffany (Christy Keller). After several years away, Reggie comes back to his hometown for reasons I really don’t remember, but I’m sure it’s mentioned somewhere in the movie. This brings me to another pointer when it comes to watching this movie, be sure to pay attention to the horrible dialogue between characters because it’s kind of key if you want to make any sense out of the mess of a story.

So, basically, once these two cousins head into town, we find out that there’s a big Halloween party that everyone’s going to be at, including Reggie’s high school crush, Madison (Anita Leeman Torres). It’s decided that Tiffany and Reggie are going to the party, but Reggie has to figure out his costume. After a cheesy montage of going through masks and voices, he finally decides on the most generic, most predictable costume idea of them all…a creepy clown. Shocking, innit?

Once they arrive at the party, Reggie recognizes most of the attendees as the folks who bullied him 20 years ago in school, and he’s obviously not thrilled to see them again. Funny enough, after Reggie shows up at the party, people begin to die. It’s pretty obvious that Reggie is the killer…or is he?!  Does Reggie have some kind of connection with Bobby Maxwell? IS he Bobby Maxwell? I know, but I’m not telling.

What I will tell you is that The Legend of Fall Creek is just a hot mess. It has its moments, but they’re few and far between. I honestly feel like this film should have had a laugh track. Like I mentioned before, the filmmakers freely admit that the acting is not good and there’s not a sensible plot. As far as the gore, nudity and violence that are also mentioned are concerned, they are disappointingly lacking. The grindhouse approach falls flat and detracts from the movie. Weird, psychedelic blurry effects are used in the kill scenes and it makes it really difficult to tell what’s going on. In a nutshell, The Legend of Fall Creek is worth your time only if you have time to waste.  It’s currently available on nearly all streaming platforms. 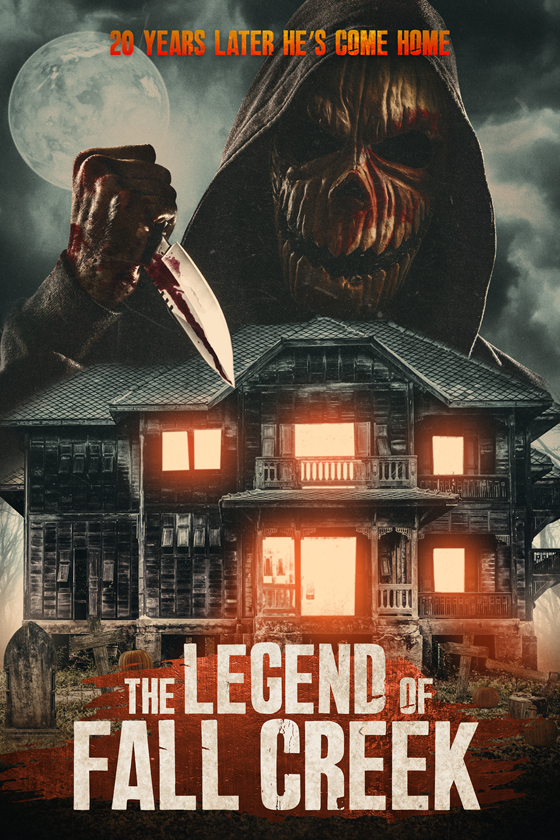